Syria's Next Potential Crisis Could Turn the Middle East Upside Down 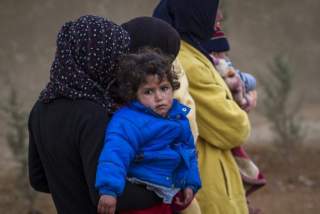 With the Assad regime now more vulnerable in its fight against rebel groups, there is a strong case for the preparation of contingency plans to deal with a new and even greater humanitarian disaster that may unfold in and around Syria.

The potential for a genocide of the Alawites cannot be discounted. But the more likely impending threat is that of a sudden and massive population movement, especially from the western seaboard of the country into Lebanon. As noted in my previous piece (Assad's Regime is Brittle, and it May Fall Fast), fear of genocide, amplified by actual incidents and social media campaigns, could produce a population movement on a scale not witnessed in the region since Palestine in 1948.

Any substantial outflow of the Alawite community (whose total number is uncertain, but if estimated to comprise 10% of the Syrian population, could be up to 2 million people) would almost certainly risk overwhelming the institutions and confessional balance of the Lebanese state.

Given the recent weakening of the momentum of the Syrian regime in its military contest with the rebel forces, and the historical precedents (Palestine in 1948 and more recently the Yazidis and Kurds of Iraq), the international community should prepare for the worst.

If the Syrian regime is seen to be collapsing, attempts by the Alawites to flee will be all but unstoppable. And for the vast majority of the refugees, particularly the Alawites and other minorities, there will be little prospect of returning to Syria. The consequences are grave. Should there be such an outflow, its legacy will reverberate around the region for decades at humanitarian, political and strategic levels.

The Lebanese Government is struggling to cope with the present burden of around 1.2 million Syrian 'persons of concern' (to use the UN High Commission for Refugees terminology). It is anxious to prevent an additional inflow further distorting the confessional political balance of the country in general and exacerbating the ongoing conflict between Sunnis and Alawites in northern Lebanon in particular. It will be keen for a further wave of refugees to be protected or absorbed elsewhere.

Europe, which is already receiving more Syrians by boat than from any other country of origin, will be the preferred destination for many. For others, the Persian Gulf states might provide an option. But neither the Gulf, European nor other Western countries are likely to be willing to countenance opening their doors to Syrian refugees on a large scale.

The challenge for the international community will be to find a comprehensive strategy that helps existing refugee populations in Lebanon and Jordan, as well as the likely Alawite influx. It will need to be focused on enabling host countries, particularly Lebanon and Jordan, to cope with the financial and social burdens of absorbing such a presence.

Because it is clearly a scenario posing a threat to international peace and security, and would be seen as such by the permanent members of the UN Security Council, planning for an international response should be led by the UN. It would need to draw upon the experience and skills of UN agencies, supported by international and national non-government organizations with specialist capabilities in such areas as child protection.

The primary and immediate aim of the international response should be to minimize the risk of an additional outflow. In that regard, the UN and Western countries should encourage and influence Turkey, Saudi Arabia, Qatar and others to urge their client rebel groups to refrain from victimizing Alawite populations. They should insist that their partners avoid the use of the imagery of retribution as a weapon to weaken the Assad regime. They should highlight their responsibilities, both religious and under international humanitarian law, to protect civilian lives and property. The rebel forces should be encouraged to see the value of creating a clear distinction between their standards of behavior and those of the Assad regime.

UN agencies and NGOs will also need to negotiate directly with rebel groups to obtain security assurances for Alawites. The work of building strategies and approaches for negotiating such arrangements, and identifying the key individuals and other factors likely to shape the outcome of such efforts, needs to begin now.

The international response should also devise ways to provide some degree of security to those seeking to leave or who have fled. Lebanon may be reluctant to open its borders even in an emergency. An intense dialogue with both the Lebanese Government and other actors may be needed if an even larger tragedy — and the risk of further derogation of Lebanese sovereignty — is to be avoided.

A longer-term aim would be to facilitate the earliest possible return of the refugees to their homes. That may prove impossible in the vast majority of cases. However, for those Syrians who do return (perhaps in the event of some sort of stand-off between the regime and its opponents), there is little likelihood they could be reabsorbed without significant financial assistance to rebuild their homes and livelihoods.

The preliminary work that needs to be undertaken to give decision makers well-defined and credible choices on such issues is immense, and there is a great deal of relevant experience from the Balkans and elsewhere that ought to be tapped to assist in that process.