T-X: How the U.S. Air Force Will Train its Elite Fighter Pilots of the Future 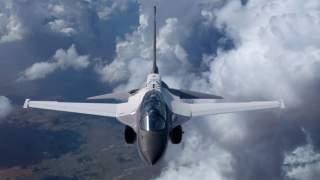 The United States Air Force is working on a set of system specifications for a new next-generation advanced jet trainer to replace the long-serving Northrop T-38 Talon, which first became operational in 1961.

While the venerable Talon remains an outstanding trainer, the diminutive twin-engine supersonic jet can no longer meet the demands of training pilots to fly advanced fifth-generation stealth fighters like the Lockheed Martin F-22 Raptor or the F-35 Joint Strike Fighter. As such, the Air Force hopes to replace the T-38 with 350 new advanced jet trainers under a program it calls the Advanced Pilot Training (APT) or simply T-X, which includes a fully integrated aircraft, ground-based training system and sustainment elements. The service finalized the requirement for the new aircraft earlier this year.

“The T-X will replace the T-38,” said Skip Hinman, Air Education and Training Command’s branch chief for Advanced Pilot Training (APT)—or T-X—requirements, during an interview with The National Interest. Hinman explained that both he and his father flew the same T-38 during pilot training.  “It’s a 55-year-old aircraft today, and by the time we’re completely done with fielding the T-X, the T-38 will be 73 years old.”

The T-38 was originally developed to train pilots to fly so-called third generation fighters like the Convair F-106 Delta Dart and F-105 Thunderchief. In fact, one retired Air Force pilot, who flew the delta-wing interceptor, said that the Talon handles remarkably similarly to the Delta Dart. But while the Air Force could make the T-38 work for training pilots to fly more advanced fourth-generation fighters like the Boeing F-15C Eagle and the Lockheed Martin F-16C Fighting Falcon, the service was forced to conduct more and more of training at the formal training units where young aviators learn to fly operational fighters. “As we moved onto fourth-gen aircraft like the F-15 and the F-16, gaps began to develop in the capabilities of the T-38,” Hinman said. ‘Those gaps further increased now as we move onto fifth-gen capabilities like the F-22 and the F-35.”

Indeed, the situation now is such that the Air Force has had to move two-thirds of the pilot training tasks that were originally intended to be completed in undergraduate pilot training into formal training units that fly fighters like the F-15, F-16, F-22 and F-35. The practice is expensive because of the high cost of flying those aircraft and because it eats up precious airframe life on those pricey machines. “The goal with T-X is to pull those tasks back into the advanced pilot training program,” Hinman said.

There are eighteen specific tasks that prospective pilots need to learn while qualifying to fly a fighter in the U.S. Air Force. Currently, twelve of those tasks have been pushed to the formal training units. Most of the gaps are “transferable” skills such as flying air-to-air, night flying, operating complex avionics and aerial refueling.

For air-to-air training, for example, the T-38 can sustain less than 5.5G turns operationally. “We know we need an aircraft that has a greater performance capability,” Hinman said. “The T-X minimum requirement for sustained Gs is 6.5. We refer to that as the threshold requirement in acquisitions speak, the maximum or desired capability is 7.5G.”

The Air Force has also set the bar for a minimum angle of attack (AOA) capability of twenty degrees with an objective requirement of twenty-five degrees AOA. “When you combine those two capabilities, you begin to see a platform where we can train in the types of air-to-air skill sets that they need to develop in a trainer aircraft,” Hinman said. “When they move onto a fifth-gen, the capabilities are beyond that, but they have developed the baseline fundamentals they need.”

Another T-38 limitation is that pilots cannot train with night-vision goggles, but night-vision capability will be mandatory on the T-X. The new trainer will also include aerial refueling training capability. “That’s a substantial, very significant improvement,” Hinman said. “There is no air refueling training in the T-38. In the T-X—as a threshold requirement—we will be able to perform air refuel training in a very sophisticated ground based trainer. For the aircraft, that will be an objective requirement. The desired capability is that the aircraft itself will be able to perform air refuelings.”

The T-X will also be able to replicate the cockpit environment found onboard fifth-generation fighters like the F-22 and F-35. The T-X will include not only a large area display similar to the one found on the F-35, but it will also have the ability to simulate a multitude of air-to-air and air-to-ground weapons and sensors onboard the aircraft. Onboard, there will be a simulated radar and potentially a targeting pod (the targeting pod is something the Air Force wants ideally, but the threshold requirement is for targeting pod in the simulator), and the students will be able to fuse data from multiple sources—with a real and simulated datalink—just like pilots onboard an F-22 or F-35, Hinman said. The Air Force calls the ability to simulate weapons and sensors onboard the aircraft “embedded training.”

The current T-X program is geared purely towards replacing the T-38s being used for Undergraduate Pilot Training and the “Introduction to Fighter Fundamentals” course. The current program won’t address the need to replace Talons being used for other purposes like testing or at aggressor units such as the ones that fly alongside F-22 squadrons in Virginia or Florida. But the Air Force is mandating that the T-X aircraft have adaptability for future modifications. “We’ve designed in some flexibility and adaptability to those future needs,” Hinman said. “We have designed in excess space, weight, power and cooling (SWaP-C).”

The T-X airframe will be built with the ability to accept additional line replaceable units (LRUs) to host additional avionics—as well as the power and cooling necessary to handle those electronics. The airframe itself will also have the ability to handle additional weight, and will be able to handle the wiring needed to install weapons hardpoints on the wings. There will also be space in the nose to add a real radar should the need arise. Moreover, even if a contractor chose not include a real aerial refueling capability onboard the T-X, the requirements will state that the aircraft will have the ability to add in that capability later without major modifications. “We’re intentionally building that in,” Hinman said.

The Air Force—which describes the need for the T-X as “existential”—hopes to have the new jet achieve initial operational capability (IOC) no later than 2024. “We on a timeline to meet IOC in 2024 and a full operational capability in 2034,” Hinman said—noting that’s also the date the T-38 will be finally retired. To meet that deadline, the Air Force will have to work quickly. The service hopes to release its request for proposals this December and award a contract by the following December in 2017.

To meet the T-X requirement, Northrop Grumman and Boeing are both designing new “purpose built” aircraft. Meanwhile, Lockheed Martin is offering a modified T-50—which it co-developed with South Korea for the T-X requirement. The last contender is Raytheon, which has teamed up with Italy’s Alenia—recently renamed Leonardo—to offer the T-100 Master, which originates as a co-development effort with Russia’s Yakovlev.

The current T-X program is the Air Force’s second attempt—ongoing since 2008—to replace the T-38 Talon. The Air Force seems committed to developing and fielding the new jet, however, the service’s budgets are unpredictable given the turmoil in Congress. Nonetheless, if the Air Force succeeds in developing the T-X, it would open the door to many new markets for the winning contractor. With the majority of America’s allies purchasing the F-35, those nations too will require a new trainer. For those future F-35 customers, the T-X could be their trainer of choice.