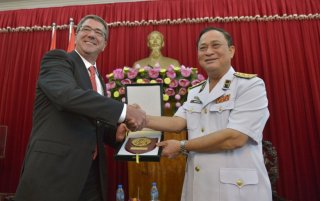 The Asia-Pacific has witnessed growing tensions in recent years. Many states in the region harbor security and defense concerns with regards to maritime security, territorial disputes and sovereignty, military postures, and the sustainability of regional alliances.

In an effort to address these concerns, the Center for Global Progress sponsored a trilateral dialogue among representatives and scholars from the United States, Japan and Vietnam. The dialogue not only focused on existing security cooperation between these three nations, but also explored ways to improve on these efforts in the future. This process resulted in a comprehensive report—“Tackling Asia’s Greatest Challenges”—based on the dialogue, which was published on June 17, 2015, and a trilateral conference at the Center for the National Interest (CFTNI) on June 18, 2015.

The report features analyses from Harry J. Kazianis, executive editor of The National Interest magazine and senior fellow for defense policy at CFTNI, who led the initiative, as well as Lt. Gen. Wallace C. Gregson, senior director of the China and the Pacific program at CFTNI; Masashi Nishihara, president of the Research Institute for Peace and Security; Hoang Anh Tuan, director-general of the Institute for Foreign Policy and Strategic Studies; and Nguyen Vu Tung, vice president of the Diplomatic Academy of Vietnam and director-general of the Institute of East Sea Studies at the Diplomatic Academy of Vietnam.

One central theme of the report is the increasing maritime security concerns vis-à-vis China and its actions in the South and East China Seas. Kazianis sees China’s moves in the South China Sea as aggressive and highlights the possibility that Beijing will declare an Air-Defense Identification Zone (ADIZ) in the region. He asserts that “China’s recent land-reclamation projects are an effort to create the core infrastructure for the declaration and enforcement of such a zone within the next several years.” Kazianis further states that “a Chinese ADIZ in the South China Sea is a near certainty.”

Addressing the need for increased regional cooperation on security issues involving China and the members of the Association of Southeast Asian Nations (ASEAN), authors Tuan and Tung argue that the United States, Japan and Vietnam all have an important role to play in facilitating cooperation and stability in the region.

Additionally, Nishihara and Gregson offer compelling cases for increased economic and humanitarian-aid cooperation, respectively; these are both important realms of cooperation, as defense concerns are not Asia’s only major challenges. As the authors further note, trade and investment between the United States, Japan and Vietnam is already on the rise, as are situations that demand humanitarian assistance.

The report is available in its entirety on CFTNI’s website, here.