Taiwan Armed with the F-35: China's Worst Nightmare or a Big Mistake? 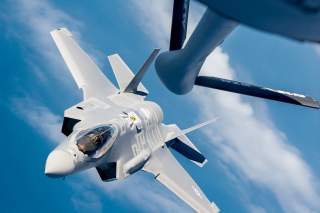 “Taiwan has a legitimate requirement to field a modern fighter fleet to address a myriad of defense contingencies,”

The reasoning within the  senators’ letter was simple and clear:

“China shows the ability to successfully wage war against Taiwan for the first time since the 1950s.”

They continued in their letter to the president,

“However, with your leadership, it is possible to help Taiwan remain a democracy, free to establish a relationship with China that is not driven by military coercion”.

Such new “fifth generation” F-35 fighters or even modern versions of “fourth generation” aircraft such as the F-16V would be a major qualitative improvement to Taiwan’s three decades old F-16 A/B aircraft, yet critics question if the aircraft would survive an  initial missile salvo attack to even see air combat. While pros and cons of the usefulness of such advanced aircraft for Taiwan are hotly debated, the political decision is even more complex since the F-35 is manufactured by a consortium of over a dozen countries rather than under one decision making authority.

A strong argument in favor of the United States transferring F-35 aircraft to Taiwan is that it would bring Taiwan’s fighter aircraft capabilities forward three decades and it would advance an entire generation in terms of air power.

Taiwan’s current fighter aircraft fleet of fourth generation F-16 A/B that former President George H.W. Bush approved for Taiwan in 1992 are hopelessly outdated, while Taiwan’s neighbors Japan and South Korea have recently purchased dozens of fifth generation F-35 from the United States. Likewise China has developed its own stealth, the J-20 fighter aircraft. From a regional and international standpoint, Taiwan is falling behind.

The purchase of F-35s would not merely add newer fighter aircraft to the inventory, but it would also elevate Taiwan’s overall defense capabilities. Having the F-35 would raise Taiwan’s overall military capabilities because the aircraft communicates with other weapons systems and enhances their capabilities. Its “sensor fusion technology” draws a 360 degree sensor field from several cameras and fuses the data into a single field view for the pilot. As a part of sensor fusion, the distributed aperture sensor can detect, categorize, and track ballistic missile launches. Using LINK 16 and other data-links, an F-35 can relay targeting data to other fifth and fourth-Generation aircraft and ground stations. Then the F-35’s naval integrated fire control – counter air (NIFC-CA) allows it to guide missiles launched by ground platforms to successfully intercept targets far out of sight of its ground operators. In this way, the F-35 improves the range and accuracy of various other ground, sea and air based military platforms.

By all accounts, the F-35 is a valuable military asset that extends simply beyond having newer aircraft in the inventory, but what use are they if they are not survivable?

“Taiwan is unfortunately situated very near a country that continues to make military threats and has invested extensively in a wide range of capabilities that will make it very difficult for Taiwan to fly fighter aircraft in combat.”

Rather than invest in new fighter aircraft such as F-35, or F-16V, the RAND authors instead suggest that Taiwan spend those billions of dollars on a large number of AIM-9X and AIM-120 missiles that would intercept incoming aircraft flying toward Taiwan in an invasion scenario. However, the vertical lift Royal Navy/Marine Corps variant, the F-35B, is attractive precisely because it is more survivable than standard fixed wing aircraft by its nature of vertical take off without the need for a runway.

Another common concern is the high cost of fifth generation aircraft compared to fourth generated alternatives, with solution often put forward to simply buy less F-35 fighters. The F-35 costs around $100 million per unit, whereas F-16s cost around $40 million each, though the costs fluctuate each year depending on the number of buyers based on economy of scale.

Taiwan bought 150 F-16s in 1992, but it does not have to buy a similar number F-35s today. In the same RAND report mentioned earlier, the authors estimated that a F-35-only force (even without F-16s) for Taiwan could be composed of just 57 F-35 aircraft. The purchase price would be comparable to the decision that Taiwan made in the early 1990s to purchase 150 units of F-16 aircraft, since the 57 units of F-35 are roughly a half to a third of the 150 F-16 aircraft, while the cost is around double to triple, so the cost evens out.

The calculations will be around $6 billion to $8 billion US dollars for either 57 F-35s or 150 F-16. In addition, Taiwan could choose to mix new F-35 and its older F-16s, as it may be able to continue to extend the life of its F-16 aircraft to last several more decades. The United States is doing something similar by structurally modifying their inventory of F-16 aircraft to go beyond the original 8,000 flight hours toward 12,000 flight hours. In addition to buying the substantive capabilities of the F-35 aircraft, the symbolism of Taiwan operating the same cutting edge fighter aircraft as the United States and its treaty allies Japan and South Korea would send a clear signal to China.

The biggest political hurdle for Washington to transfer a batch of F-35s to Taiwan is that unlike other fighter aircraft, the F-35 Joint Strike Fighter is manufactured by a consortium of defense companies spanning nine countries.

For such a sale to succeed, it would take creative policy making and manufacturing processes by the United States to produce essential parts without the involvement of the rest of the consortium.

By citing the threat from China, and the need for the United States to support Taiwan as a vibrant democracy, Senator Cornyn and Senator Inhofe strongly advocated for the sale of F-35 or the newer F-16V variant. The benefits of the F-35 exceed what most people understand, since its utility in joint and networked operations is far beyond adding more fighter aircraft to the inventory. The drawbacks and costs are also manageable, especially if Taiwan only keeps one to three squadrons. In the near term the F-16V could also be a practical solution, since Taiwan’s aging F-16A/Bs are on the verge of being decommissioned. For Taiwanese F-35s, the biggest hurdle will be the political decision to make the sale, as that decision spans beyond the authority of just one country and China’s economic and political influence is growing.

David An is a senior research fellow at the Global Taiwan Institute and was previously a political military officer at the US Department of State,