Taiwan Is Barely Clinging to the 1992 Consensus 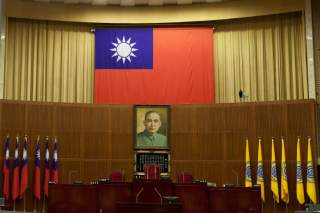 The 1992 Consensus, conceived in 1992 and named in 2000, has dominated the main interaction between China and Taiwan for years, officially ending in 2016. While some China watchers have argued the inaugural speech of newly elected Taiwan President Tsai Ing-wen on May 20th of this year continues the 1992 Consensus, the truth is that only by reading the speech in a complete context can the meaning of it be properly understood. It is fair to say that Tsai’s speech officially ended the era of 1992 Consensus.

In order to prepare for the historical meeting in Singapore, the officials of the Republic of China (the official name for Taiwan) and the officials of the People’s Republic of China (the official name of mainland China) met in Hong Kong to settle and arrange affairs related to this meeting in 1992. PRC officials demanded that the “One China Principle” should be put as a foreword to any agreement related to this meeting. The ROC officials disagreed. After several back-and-forth negotiations, the two sides decided to keep two amendments for the record, which were as follows:

The PRC: “Both sides of the Taiwan Strait uphold the One China Principle and strive to seek national unification. However, in routine cross-strait consultations, the political meaning of ‘One China’ will not be involved.”

The ROC: “Although the two sides uphold the One China Principle in the process of striving for cross-Strait national unification, each side has its own understanding of the meaning of One China (the so-called one China, different interpretations).”

These two amendments did not get too much attention at the time, but they became the “1992 Consensus” in 2000. Su Chi, who served as the Minister of Mainland Affairs of the ROC under President Lee Teng-Hui, suggested the newly elected President Chen Shui-bian use the term “1992 Consensus” in his inaugural speech in 2000. Su believed that only by making “one China, different interpretations” more ambiguous so that Chen from the Democratic Progressive Party (who did not like the term “one China”) and China (who did not like the term “different interpretations”) could the gap be bridged between the two.  Chen refused to use the term in the end.

Secondly, Tsai announced that Taiwan’s new economic policy aims at developing closer relations with Southeast Asian countries and India. This is not the first time Taiwan has eyed these markets, but the difference this time is that economic relations will be paired with closer diplomatic relations. As Tsai indicated, Taiwan will say goodbye to its past overreliance on a single market (China), which was the main economic policy of Ma’s presidency.

Third, Tsai’s speech indicates a change in national identity. In past presidential speeches, Lee said people on both sides of the strait are Chinese in 1996, and Ma pointed out that people of the two sides are both of the Chinese nation in 2012. When mentioning people in Taiwan, the only word Tsai uses is “Taiwanese” (as opposed to Han Chinese). Similar to Chen’s speeches in 2004, she emphasizes that Taiwan is a multicultural place where many ethnic groups exist and people’s identity should be based on where they are now, not on where they were from.

Most importantly, the speech ends the viability of the 1992 Consensus. What China wants to hear from Tsai is that she formally recognizes the core element of the 1992 Consensus. At first glance, Tsai seems to indirectly accept China’s wish by respecting the 1992 meeting and expressing her hope to conduct cross-strait relations based on “the existing political foundation.” Tsai did not use the exact term “1992 Consensus in her speech, saying instead that she respects the 1992 meeting and hoped to conduct cross-strait relations based on an existing political foundation. This ambiguity left the door open to assuming that Tsai indirectly accepted the 1992 Consensus, pleasing China. However, she then puts more elements to this political foundation, such as the existing ROC constitutional order, the outcomes of over twenty years of negotiations and interactions across the strait, the democratic principle, and the prevalent will of the people of Taiwan. And Tsai does not provide an answer to the question of which one of these elements has higher priority when two of them are in conflict. Put differently, she redefines the 1992 Consensus by complicating the meaning contained in it, and by doing so she substantively ends the life of the 1992 Consensus.

It should be noted that Tsai’s speech by no means intends to provoke China; instead, she exhibits great flexibility and goodwill in her China policy. Since she started her campaign for the presidency, she has not mentioned her party constitution, which was promulgated in 1986], and was aimed at establishing an independent Republic of Taiwan. Furthermore, unlike Lee who publicly stated the Republic of China has been a sovereign country in his inaugural speech, Tsai only mentions the provocative word “sovereignty” once during her forty-minute speech and when the context is necessary—“in accordance with the Constitution of the ROC, it is my responsibility to safeguard the sovereignty and territory of the ROC.” Moreover, she puts the issue of the 1992 Consensus behind the issues of the economy, social safety, and social justice, only using 322 words of her 5900-word speech to address it. Such a low profile and pragmatic attitude show her good intentions to manage the thorny cross-strait issue.

China seems to accept the end of the 1992 Consensus era as well. On the surface, China’s official response is criticism, as expected, but the tone is rather restrained. China simply expresses that Tsai’s speech is an incomplete test answer, and even the hawkish Huanqiao Shibao decided to closely observe Tsai’s behaviour in the future. One key scholar in a Chinese think tank also commented that Tsai’s speech has offered a condition for a thawing of the relations between Taiwan and China.

As Tsai hinted when she said “the two sides must set aside the baggage of history,” this speech ushers in the post-1992 consensus era between Taiwan and China. A new term defining the nature of relations between the two is waiting to be coined. The two sides may have a new modus vivendi. Indeed, chances are that Tsai, with her deep green political background and strong support from Taiwanese, might become Taiwan’s Richard Nixon—but the precondition is that Beijing needs to work with Tsai.

Yu-Hua Chen is a PhD Candidate of the Australian National University.