Taiwan Is Bringing Back Cold War Missiles to Deter China 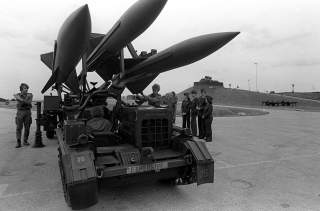 Taiwan’s armed forces will rely on a missile system that was first developed nearly 60 years ago for frontline defense on their Pacific coastline against intruding Chinese aircraft.

Launch pads and silos will be installed on key outlying territories, including Orchid Island and Green Island. The islands are strategically located on Taiwan’s southeastern coast close to routes used by the People’s Liberation Army Air Force for what Taiwan claims have been  constant breaches of its airspace.

Taiwanese forces on Orchid Island will be able to intercept aircraft flying along the east coast and can also control activity in the adjacent Bashi Channel. Analysts say the Hawks can fill a defensive void and give Taiwan more leverage in a silent war of attrition with China that it seemed to be losing.

But the defense wall will be underpinned by a weapon that was first deployed by the US Army in 1959 and has not been used by any branch of the American military since 2002, though there has been a series of updates over the years. It is still in service with armed forces in Israel, the United Arab Emirates and Japan, among others.

Alex Huang, assistant professor at  Tamkang University’s Institute of international Affairs and Strategic Studies, told the Hong Kong-based Ming Pao newspaper that although the missiles dated back to the Cold War era, they were still the backbone of Taiwan’s air defenses, and had undergone modifications to range, altitude and guidance systems.

The Hawks were supposed to be phased out by 2013 and replaced by Taiwan’s own Sky Bow series of surface-to-air anti-ballistic missile systems. It is not known when the changeover will now happen.

China’s state-owned media, including the Global Times and NetEase, lost no time jeering Taipei’s use of “ancient” missiles in derisory news reports. Online readers also poked fun at the missile’s limited firepower — it has a modest 54-kilogram warhead — and range of just 50 kilometers, boasting that more advanced Chinese fighters such as the J-20 could easily pierce the defensive shield.

The Hawks will have some back-up: it has been reported that batches of the highly mobile MIM-104 Patriot surface-to-air missile have also been dispatched to the eastern counties of Hualien and Taitung.