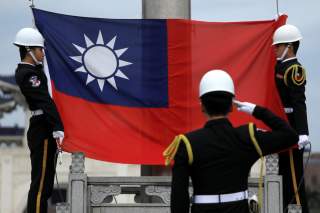 Taiwan was regularly accorded observer status at the annual World Health Assembly (WHA) between 2009 and 2016. The assembly represents the premier international gathering for government officials and health professionals to discuss a wide variety of global-health concerns. Regrettably, the World Health Organization (WHO) did not invite Taiwan to attend the seventy-first WHA to be held May 21-26 in Geneva. Taiwan has more than 23 million citizens and its representatives deserve a seat at the table—not only to safeguard the health of those citizens, but also to make invaluable contributions on the cutting edge of medical research, and also to because Taiwan is a key contributor during global-health crises.

The United States and other friends and allies of Taiwan have issued vigorous protests over the WHO’s caving to Beijing's pressure. This is in blatant disregard of the WHO’s constitution, which notes that the highest attainable standard of health is a fundamental right for every human being—that is something that the people of Taiwan are rightly entitled to. A State Department spokesperson told a Taiwanese news agency that “the United States strongly supports Taiwan participation as an observer in the World Health Assembly. We are greatly dismayed that China has once again blocked Taiwan from receiving an invitation to attend.”

It has been long-standing U.S. policy, in fact, to support Taiwan’s observer status in the annual WHA, both as a matter of fairness and due to genuine regional and global healthcare concerns. For example, when the 2002–2003 Severe Acute Respiratory Syndrome (SARS) pandemic swept across East Asia leaving a death toll of thirty-seven in Taiwan, 299 in Hong Kong and 349 on the Chinese mainland, it caused grave concern that SARS would reach the American homeland. Consequently, in 2004, the U.S. Congress enacted legislation (PL 108-235) requiring the Secretary of State to seek Taiwan’s observer status in the World Health Organization at every annual assembly.

The legislation also specified that the Secretary of State “shall submit” an annual report to the Congress, in unclassified form, describing the United States plan to endorse and obtain observer status for Taiwan at the WHA. As this public law contained no relevant sunset clauses, Secretary of State Mike Pompeo is under the same obligation as his predecessors to provide such information to the Congress.

The United States House of Representatives passed further legislation (H.R. 3320) in January of this year that serves as a reminder to the Secretary of State of his legislative obligations regarding Taiwan and the annual WHA H.R. 3320 is currently awaiting further action by the Senate Foreign Relations Committee.

Taiwan, despite severe limitations placed upon its linkage to the international healthcare network due to politically biased restrictions, has proved to be a key partner of the United States in fighting global-health crises. During the 2014–2015 Ebola pandemic in West Africa, for example, Taiwan partnered with the U.S. Centers for Disease Control and Prevention (CDC) in coordinated efforts, including a $1 million donation. Pandemics such as SARS and Ebola freely travel across international borders. Only when every member of the international community is included in addressing collective health crises can the negative effects of the next potential pandemic outbreak be minimized.

Taiwan has also proven to be a model in the Indo-Pacific region in its provision of affordable and nearly universal healthcare to its populations. Many societies throughout the world are struggling with this vexing problem as they face aging populations with ever-increasing healthcare needs. Taiwan’s government was the first in Asia to implement a national health insurance program, which boasts a coverage rate of 99.9 percent. Medical expenditures in Taiwan account for a mere 6.3 percent of GDP. Taiwan is ready and willing to share its national health insurance success story with other members of the international community who are struggling with this challenging issue. But it needs a voice at the WHA to do so.

Global-health concerns know no borders. The insertion of artificial restrictions for petty political reasons has no place at a meeting of international healthcare professionals gathered to consider the health challenges facing the world today. We need Taiwan and its expertise in Geneva. The American people, the U.S. Congress and the Secretary of State need to speak with one voice: Let Taiwan be heard!

Dennis Halpin is a former senior adviser on Asian issues for the House Foreign Affairs Committee.