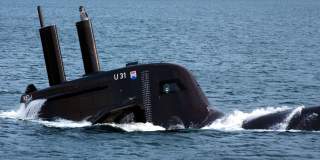 It is clear to Taiwan that it can’t match mainland China’s military might. As a result, the country is increasingly relying on an asymmetric approach to close the gap. But Taipei’s plan to focus significant resources on building up the country’s submarine fleet probably isn’t the best way forward.

Taiwan’s latest quadrennial defense review, released in March 2017, departed little from previous versions in its basic strategy. The review highlighted the increasing capabilities of mainland China’s forces and the need for countermeasures to ‘achieve resolute defense through multi-domain deterrence’ by ‘adopting innovative/asymmetric means’.

The adoption of an asymmetric warfare strategy—in which a typically weaker military force seeks to exploit a stronger opponent’s vulnerable points by using different weapons and tactics—has long been an undercurrent of Taiwanese defense policy. Given China’s economic growth, it has been clear for a good while that Taiwan’s armed forces can’t maintain the advantage they had over the People’s Liberation Army (PLA) during the Cold War era.

The Taiwanese navy’s recently launched $14.7 billion shipbuilding and force modernization program is the maritime element of the attempt to rise to the challenge of meeting Taiwan’s future defense needs. Although the plans for revitalising the surface fleet contain some provisions for asymmetry, the main effort in this area is focused on building a new submarine fleet. However, it’s highly questionable whether that’s the right type of asymmetry for Taiwan to embrace.

With only four ageing vessels, two of which date back to the 1940s, Taiwan’s subsurface fleet is in need of an upgrade. In 2001, the US agreed to build new vessels, but that effort quickly fell apart for political and technical reasons. With no other country willing to supply Taiwan with submarines due to fear of economic retaliation from China, Taipei this year announced that it would build eight of its own.

Leaving aside the vast expense and inevitable delays that Taiwan will face in building a submarine industry effectively from scratch, what level of capability is the country likely to get? Many enthusiasts envision the vessels patrolling the Taiwan Strait in wartime so that they can sink PLA transport ships ferrying troops and equipment to the Taiwanese coast. If that occurred, Taiwan’s loss of air superiority and sea control in the face of overwhelming PLA forces would be less decisive.

But is that scenario in any way realistic? China has plenty of offensive assets of its own. Some, such as its conventionally armed ballistic missiles, would go towards ensuring that Taiwan’s submarines never leave harbour. Those submarines that did get out to sea would be vastly outnumbered by the PLA’s subsurface assets, and would also face an armada of surface ships and anti-submarine aircraft.

So what’s the alternative to submarine-based, gold-plated asymmetry? In the battle for the Taiwan Strait, the best option would be to further develop and expand more modest existing programs. Rather than submarines, Taipei should purchase dozens of upgraded models of the Kuang Hua VI-class fast attack craft fitted with the new extended-range version of the Hsiung-Feng II anti-ship missile. In times of tension, these small craft could be widely spread among Taiwan’s harbors to help ensure the vessels’ survival.

Aspects of the new shipbuilding program should also be expanded. Less well publicized than plans for new destroyers and submarines is the intention to construct 11 Tuo Chiang-class corvettes. Increasing the number to around 20 would create a numerically resilient force capable of inflicting immense damage. Also of great potential utility and worthy of expansion is the plan to build four high-speed minelayers. Those vessels could all be backed up by large numbers of shore-based anti-ship missiles launched from platforms disguised as commercial vehicles.

Arguments that giving up its submarine capability entirely would represent an unacceptable Taiwanese surrender of the underwater realm don’t stand up to scrutiny. Importantly, the main threat posed by Chinese submarines isn’t in the Taiwan Strait; what’s more threatening is their ability to enforce a blockade in the more outward-facing maritime approaches to Taiwan. But patrolling in those areas would often put them beyond the easy protection of many of Beijing’s aircraft and mainland surface-to-air missile batteries.

Taipei’s submarine-killing needs might therefore be best served by land-based anti-submarine helicopters using corvettes as ‘lily pads’ to refuel and extend their range. Although Taiwan’s navy already operates such helicopters from its ships, expanding the fleet and planning to operate them from camouflaged dispersal sites along Taiwan’s east coast would improve the force’s survivability and effectiveness. The country is already planning to order 10 MH-60R Seahawks from the US, and that number could be increased with money freed up from the submarine program. While Taiwan would always ultimately rely on the timely arrival of the US Navy to break a blockade, a credible effort in Taipei’s territorial waters would encourage Washington to commit its forces to keeping international waters open.

The navy isn’t the only branch of Taiwan’s military that’s trying to procure an expensive and largely traditional system by calling it asymmetric. But even so, its attempt to obtain a prestige asset that’s more glamorous but less useful than alternatives remains potentially damaging and should be resisted. The practical matter of Taiwan’s defence needs to come first.