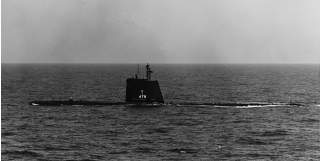 Life expectancy varies between ships, but U.S. submarines generally stay in service for around 20 or 30 years or so. Taiwan, however, is planning for one of its submarines to reach age 80.

On Jan. 21, 2017, Taiwan announced that the 72-year-old SS-791 Hai Shih, or Sea Lion, will receive a retrofit allowing it to continue sailing until 2026. The $19 million retrofit will be to improve the hull and the diesel vessel’s “navigational elements,” Taiwan News reported.

Eight-zero. That’s a remarkable lifespan for a submarine, and the Hai Shih is already the oldest submarine still in service with a navy anywhere in the world — she looks like she traveled decades into the future through a wormhole.

Before she was Hai Shih, she was the U.S. Navy submarine USS Cutlass, a 1,570-ton Tench-class vessel that launched on Nov. 5, 1944 during World War II. Her wartime service was brief, and Cutlass didn’t reach her first patrol zone near the Kuril Islands until the day after Japan capitulated.

When the United States sold her to Taiwan in 1974, it sealed up Cutlass’ 10 torpedo tubes — six forward and four aft — and she became the Hai Shih. Very little has changed internally, apparently, but she still works.

A few years ago, researchers with the San Francisco Maritime National Park Association took a tour of the ex-Cutlass. “It was absolutely stunning how little has changed,” they wrote. “Equally stunning, is the high grade of operational condition.”

At the time, the 311-foot-long submarine still had a World War II-era Arma Mk 7 gyrocompass — one of a handful still working anywhere.

“Virtually all examples of these compasses were removed from the boats in the late 1950s and replaced with a smaller, easier to maintain (although less accurate) Sperry Mk 18s or later, modern Mk 19s,” the researchers wrote. “When we entered the control room there was the Arma gyrocompass, right where it should be, spinning, pointing north, and in use.”

“Over and over again this would happen during our time on these boats. We would find equipment running in perfect order that we had not imagined was retained, or maintained.”

It’s unclear if Hai Shih and the almost-as-ancient Hai Pao, Taiwan’s former Balao-class submarine that launched on Nov. 7, 1944 as the USS Tusk, are capable of combat. If the Hai Shih retrofit is successful, then Hai Pao’s service life could also be extended, according to Taiwan News.

Taiwan uses the submarines for training purposes, although sporadic reports citing Taiwanese officials over the years have indicated that their torpedo tubes had been unsealed. They are also capable of laying mines.

“The Navy command recently took the unprecedented step of telling the media that [Hai Shih] was on an offshore mission, thus dispelling doubts about the World War II-era submarine still being useful and safe the next century,” Taiwan News noted.

But even if Hai Shih and Hai Pao are not combat-capable, the submarines could still be useful as reconnaissance vessels. They certainly would not match the Chinese navy, which could send dozens of submarines into Taiwan’s waters along with sub-hunting destroyers and aircraft.

Then again, if the antiques can still bite, they might pose a threat to some surface ships such as transport vessels.

Two other Taiwanese submarines, both Dutch-built Chien Lung class boats — based on the Zwaardvis class — carry torpedoes. And while those submarines are getting on in years, too, as they date to the mid-1980s, at least they’re not from World War II.

For Taiwan to build its own submarines would be an expensive — although not impossible — proposition requiring hard-to-find foreign assistance, and countries abroad have been wary of damaging relations with China by selling Taiwan modern subs or the technology to build them.

Taiwan has been researching how to do it, but it’s slow going.

So Taiwan, at least right now, doesn’t have many options but to keep its creaky, ancient submarines in service for a little while longer.