Taiwan’s Military Is Training (Right Now) for the Ultimate Nightmare: A Chinese Invasion 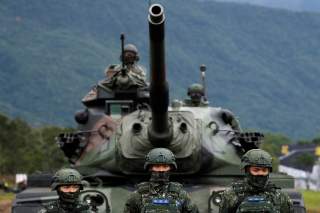 Taiwan is to kick-start its annual Han Kuang Exercise on June 4, a five-day war game to simulate an invasion by the People’s Liberation Army and one of the largest shows of force seen on the island in recent years.

Taiwan’s defense ministry said the scale of this year’s exercise had been unseen in the 34 years since the Han Kuang Exercise started in 1984.

Taiwan President Tsai Ing-wen is scheduled to inspect all the participating brigades, on top of a site trip to a key missile battalion in the Ching Chuan Kang Air Base in the central municipality of Taichung.

This is a stronghold tasked with maintaining and operating the MIM-104 Patriot surface-to-air missiles, the backbone of the island’s tactical high to medium air defense shield.

A paratrooper from the Army Aviation and Special Forces Command was critically injured during a rehearsal for the exercises at the air base on Thursday when his parachute failed to fully expand after he jumped from a C-130 Hercules transport plane at an altitude of almost 400 meters.

Taiwan’s defense ministry said it had notified all military branches to adopt enhanced safety measures and improve training to ensure that drills are conducted in a safe manner to prevent a similar incident.

Taiwanese papers also report that Tsai had wanted to beef up the scale of the drill amid Beijing’s coercion of a “military recapture.”

It remains to be seen how the PLA will respond with its circumnavigations targeting the island in the air and on the sea, when the Taiwanese army is in an all-out drill to coordinate and test its tactics and deployment under a noted anti-aggression theme.

“The cross-strait ties may enter another combustible moment when Taiwan is to mobilize almost all of its military manpower and equipment … The possibility of a face-off in the air between Chinese and Taiwanese warplanes cannot be ruled out,” said a commentator in the Taipei-based Liberty Times.

It was also reported that on Thursday a Chinese Y-8 transport aircraft-turned-jammer, believed to have taken off from a base in southern Guangdong province, flew past the middle line of the Taiwan Strait, the tacit air and maritime border between China and Taiwan.

The Chinese flight exposed the Taiwanese Air Force’s tardiness in scrambling its own planes to intercept the breach of Taiwan’s airspace. The defense ministry only noted that other than scrambling jets to monitor and warn off any invading aircraft, PLA planes flying past the strait would also come within the range of the island’s MIM-104 Patriot and other air defense missiles.

A similar incident happened on Monday when another Y-8 electronic warfare and tactical jamming plane skimmed the middle line and flew close to Taipei before following the same route back to the Chinese side.