Taiwan’s President Is Running out of Time 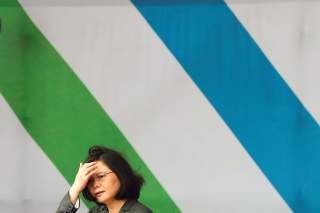 Taiwan’s Democratic Progressive Party (DPP) has dominated both the executive and legislature since 20 May 2016. Despite this, Taiwan has not experienced stability under the government of President Tsai Ing-wen. Taiwan has instead experienced the rudeness, uneasiness and nonchalance associated with mediocre governance.

The Tsai administration’s rudeness is apparent in its government’s programs in the name of ‘reform’.

With its numerical advantage in the Legislative Yuan (Taiwan’s parliament), the DPP successfully pushed through a package of pension reforms that targeted both retired and incumbent civil servants and teachers. The ‘reforms’ are of retrospectivity in nature and fail to consider their impact on the quality of the civil service and on school and university teachers. Retirement funds for private-sector workers and retired servicemen, both of which are larger than the afore-mentioned, are a more immediate problem for the government, which makes the DPP’s hasty focus on civil servants and teachers even more bizarre.

Under the title of ‘transitional justice’, the DPP government created two new administrative agencies with the ability to penalise the opposition Kuomintang (KMT) and affiliated organisations. The Act on Promoting Transitional Justice, which was passed in December 2017, seeks to remove public symbols and rename landmarks from Taiwan’s era of authoritarian rule while lacking a clear definition of ‘authoritarian’. The Act stirred up controversy about whether or not the DPP had gone too far in its bid to ‘achieve transitional justice, reconciliation and unity’.

In addition to demonstrating rudeness, Tsai’s administration has also stoked uneasiness in the population. This uneasiness stems from at least three of its initiatives.

First are the revisions (both effected and proposed) to the Labour Standards Act. The revisions arguably relax rules for overtime pay and minimum time between shifts, and they represent a ‘hair-pin turn’ for a government that was elected amid dissatisfaction with low wage growth and a widening wealth gap. It is not just some workers and their unions that have objected to the reforms — business owners are worried about uncertainty and a potential increase in labour costs.

Second is the DPP’s initiative that is replacing nuclear power with thermal power. It was seriously challenged by the five hour-long power shortage across western Taiwan on 15 August 2017 and by the pollution haze that has come from partially from the greater use of thermal power and affected people’s health. The DPP has been caught between the temporary reactivation of its nuclear power plants (to secure a more stable supply of electricity) and its insistence on renewable energy and pollution-heavy thermal power. Anxiety about the supply of electricity has become more obvious and has damaged the reliability of the government.

Last are the budgetary concerns caused by the Forward-Looking Infrastructure Development Programme. This DPP-initiated Programme aims to fund Taiwan’s future infrastructure needs at the cost of roughly 882 billion New Taiwan dollars (NT$882 billion, or US$28.4 billion) over eight years. There was concern about the Programme’s effect on Taiwan’s rising debt levels, which caused strong opposition for the Programme. As a result, the DPP compromised with opposition parties to hammer out a special budget of NT$420 billion (US$13.5 billion) over four years to fund the Programme. The hastiness of that decision (with the decision itself based on insufficient information and some non-specific plans such as the railway projects originally accounting for almost 50 per cent of the total budget) increased worries about the Programme’s feasibility and impact.

In addition to demonstrating rudeness and causing unease, the government has manifested nonchalance in its cross-Strait relations and international participation policies.

The central government and the DPP (both led by Tsai) do not recognise the ‘1992 consensus’, which served as the political foundation for cross-Strait dialogues during Ma Ying-jeou’s presidency. In response, the mainland government has cut off most of the official exchange between the two sides and shown little interest in implementing certain bilateral agreements, such as the Cross-Strait Mutual Legal Assistance Agreement.

The number of mainland Chinese tourists visiting Taiwan in 2017 dropped by about 20 per cent from the record high in 2016. Without warning, People’s Liberation Army aircraft flew around the Island of Taiwan at least 10 times in 2017. Under Tsai’s leadership, Taiwan has been unable to participate meaningfully in the major international organisations which Taiwan joined under Ma’s presidency. Due to Beijing’s political opposition, most of Taiwan’s overseas missions have been forced to operate under the official name of ‘Taipei’. The Tsai administration’s protests have not brought about any concrete solution. Yet the DPP government diverted attention away from these incidents and instead called for a ‘New Southbound Policy’ to enhance Taiwan’s ties with South and Southeast Asian countries.

Despite the Tsai administration’s declining approval ratings, the KMT’s approval hasn’t bounded back. In a 17 December poll about 41 per cent of people surveyed indicated no inclination towards a specific political party, and there was only a small difference between DPP and KMT approval ratings. Tsai’s errors may have lost her popularity, but the KMT hasn’t been able to capitalise on them.

Kwei-Bo Huang is Vice Dean at the College of International Affairs and Associate Professor of Diplomacy at National Chengchi University, Taipei, Taiwan (ROC). He served as chairman of the Research and Planning Committee at the Republic of China Ministry of Foreign Affairs between February 2009 and January 2011.