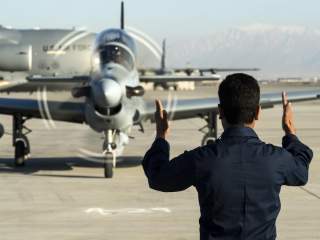 Based on similar contracts for the C-208, the A-29’s engine and the aircraft’s propellers could pose their own problems. Both planes use versions of the popular Pratt and Whitney Canada PT-6 turboprop. “Propeller props commonly encounter foreign object debris. . . damage when operating on austere runways in Afghanistan,” a draft version of another contract explained. “Afghan pilots routinely over-torque the engine on the C208-B aircraft.”

Over-torquing and turbine can cause excessive wear and tear on critical parts. This translates to more frequent and serious repairs—and can put aircraft out of commission.

Between January and October 2015, each of the Afghan air force’s eighteen C-208s averaged fewer than 25 flight hours per month, according to an official table included with the contract documents. One of the light transports spent five months grounded.

Still, Pietrucha isn’t so sure the engines will be much of a problem. “I have seen full-up maintenance facilities for the PT-6A in a space too small to park two cars in, run by mechanics with a high school education,” he noted. “Fuel costs are a much bigger deal in Afghanistan than in many other locations, and the aircraft can get by on low fuel quantities.”

But with the Taliban stepping up their attacks on major urban centers like Kunduz and a rare winter offensive in progress, the A-29s will have to be ready to go consistently to have any serious impact on the fighting. Especially if they’re dispersed at sites around the country, any combination of these issues could easily sideline the planes.