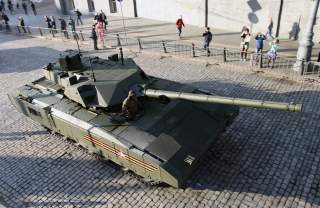 If tensions between Russia and the United States spill over into open warfare in Europe, the conflict would inevitably escalate into a nuclear war. But even during a potential World War III, there might be a gradual escalation into a nuclear Armageddon. In the unlikely scenario of a future conflict in the late 2020s for example in the vicinity of Kaliningrad, perhaps sparked by some sort of unintentional clash, Russian and American armor may square off against each other.

By the mid-2020s, the U.S. Army’s tank force will be dominated by the General Dynamics Land Systems M1A2 SEP v.4 Abrams main battle tank. Compared today’s SEP v.2 and the SEP v.3, which is just starting to be introduced, the SEP v.4 will have improved sensors, networking and protection. However, it will largely be similar to today’s Abrams.

The Russian ground forces, however, would likely be equipped with a mix of T-72B3Ms, T-80BVMs, T-90Ms and some number of T-14 Armatas. Of these, the most formidable on paper the T-14, which features advanced protection systems and an unmanned turret. It also offers excellent mobility.

Captain Stefan Bühler, graduate engineer at the University of Applied Sciences, Explosive Ordnance Disposal Officer at the NBC-KAMIR Competence Center for the Swiss Armed Forces and Commander of Tank Squadron 12/1, argues that the T-14 offers a high power to weight ratio at roughly the same ground pressure. Thus, the 48-ton Armata should be much more maneuverable than the Abrams or the German Leopard 2 for that matter.

Further, given its combination of active protection systems, reactive armor and passive laminated armor, the T-14 could offer better protection for its crew than a comparable Western tank such as the Abrams. Moreover, Bühler argues that the Armata’s unmanned turret offers some survivability advantages. “Based on all these considerations, it must be assumed that the T-14 Armata offers the crew a higher overall level of protection than its western counterparts, despite its significantly lower combat weight,” Bühler wrote.

In terms of sensors, the Abrams will likely retain an edge—since the Russians are behind on that front. However, Bühler notes that sensors are a problem for all tanks. “Compared to older optical systems, video cameras and electro-optical scopes are neither more nor less vulnerable to enemy fire or splintering. Optics are, and will remain, the Achilles’ heel of a battle tank, including the T-14,” Bühler wrote.

There is also one other disadvantage to the unmanned turret. The commander cannot pop his head out of the vehicle to maximize his situational awareness. However, that problem could be solved by technology. “The discussion among experts now revolves mainly around the question of whether the commander lacks the necessary overview when sitting in the tank or whether TV cameras and electro-optical aiming devices can actually provide the same information as the optical aiming devices and observation equipment on the current generation of battle tanks,” Bühler wrote. “A look into the sky provides the (technical) answer: the pilot of an F-35 can look through the aircraft with his head-up display – a computer generates a virtual 3D world from the video signals from the cameras mounted all around, which is then faded into his optics depending on the pilot’s direction of vision. With such technology, as offered by the Israeli company ELBIT Systems under the name ‘Iron Vision’ for use on armored vehicles, the commander of a T-14 could see even more than the commander of a battle tank with a manned turret.”

Ultimately, it is likely that the T-14 and Abrams offer comparable performance—neither is likely to have insurmountable advantage over the other. However, the Abrams’ superior sensors—and likely superior U.S. Army training and combat doctrine—will afford the United States the edge, albeit a small one. Of course, if there is ever a shooting war between the United States and Russia, low level tactical issues will be meaningless in the face of what is likely to be a nuclear holocaust.