Ten Percent of Western Recruits to ISIS are Women 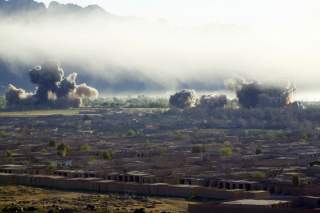 After the grisly execution of American journalist Steven Sotloff by an ISIS terrorist earlier this month, a chilling message from inside ISIS-controlled territory reached tens of thousands globally via social media:

It came from Umm Ubaydah, a Western woman who had converted to Islam, moved to Syria, married a jihadist fighter, and joined in the ISIS media campaign to drum up support for the movement among English-language Tweeters and bloggers everywhere.

According to estimates by American and European centers for the study of radicalization, Umm Ubaydah is one of hundreds of Western women who have either joined the ranks of ISIS or been intercepted en route to the territory it now controls. Some are converts to Islam: Nineteen-year-old Coloradan Shannon Maureen Conley, arrested in April by the FBI on her way out of the country via Denver International Airport, pleaded guilty on September 10 to planning to join the group. Other female recruits hail from Muslim immigrant communities, such as the two teenage Somalis from Norway and several Somali American women from Minnesota who did make it to Syria. A UK study estimates that ten percent of the thousands of Western recruits to the “Islamic State” are women, while one French estimate puts the number much higher. They are only a small part, in turn, of a much larger number of women from within the Muslim world who have also made “hijra” — religiously-motivated migration — to the area.

Whatever the precise breakdown of national origins and proportion to men, female jihadists carry a significance greater than their numbers. From the cynical standpoint of ISIS and similarly-minded groups, they are a propaganda coup, and a further incentive to men to join their ranks. (By most accounts the organizations do not use the women as fighters but rather “provide” them to male jihadists as mates and homemakers while encouraging them to take to the Twittersphere.) From the standpoint of global security, the fact that foreign recruits to these organizations include both genders adds a layer of complexity to the challenge of mitigating threats potentially posed by jihadist “returnees” to their countries of origin. Thus it behooves Muslim and non-Muslim societies alike, in honing their approaches to “countering violent extremism,” to adapt a gendered approach that takes women as well as men into account — both as part of the problem, and as part of the solution.

Studies of female radicalization have identified a range of causes, some overlapping with men and others unique to women. Mia Bloom of the Center for Terrorism and Security Studies at UMass Lowell sees a combination of factors peculiar to Muslim minorities in the West, ranging from feelings of alienation within the Muslim community to Islamophobia in the broader society. In some cases, both in Western and Muslim countries, radicalization has been linked to personal psychological problems. In others, particularly in the Muslim world, it may be a woman’s response to her own pariah status having been accused of slighting the “honor” of her family through extramarital sex.

Fortunately, a more pervasive phenomenon with respect to women and radicalization is an opposing trend, whereby women are seen playing a disproportionately large role in mitigating extremism and all forms of violent conflict. A UNESCO study on the role of women in war-torn African states found a clear correlation between the degree of their inclusion in peace building efforts and those efforts’ overall success. The study informed United Nations Security Council Resolution 1325, calling for the recruitment of women to play an integral role in conflict resolution and all efforts at “countering violent extremism” (CVE). Krista London Couture, a former Deputy Branch Chief at the National Counterterrorism Center in Washington, recently studied the positive role of women in CVE as a fellow at the Brookings Institution, and found that overall, “When women are empowered socially, politically, and economically and when there are higher levels of gender equality, the chances of peace and conflict prevention should increase.”

Couture investigated two Muslim countries in which domestic manifestations of terrorism have been remarkably low in recent years — Bangladesh and Morocco — and found robust government efforts to enlist women in the struggle against extremism.

In Bangladesh, she reports, the ruling Awami League political party, in power since 2008, has won accolades for a holistic counterterrorism strategy into which women’s social and economic empowerment figure prominently. The party has intensified efforts to strengthen women’s financial capacity in impoverished areas through micro-lending programs, improved women’s literacy rates through higher primary school attendance, and taken aggressive measures to bring more women into the work force. “Bangladesh has made significant progress in meeting its CVE objectives and goals,” Couture writes, “and empowered women in Bangladesh are considered crucial to the success.”

The Bangladeshi experience bears emulating in other impoverished Muslim countries. The status of Muslim women is extremely different in the United States, to be sure, where Muslims of both genders tend to rank among the 25% most affluent and educated people in the country. But in Western Europe, there is poverty and disaffection among many Muslim communities — as well as a socioeconomic gender imbalance within them. Thus the relevance of Bangladeshi CVE strategies is not limited to the developing world.

During Couture’s visit to Morocco, she found similar efforts at women’s empowerment in terms of finance, employment, and education. She also found special efforts to improve the legal status of women and, most remarkably, their role in the religious leadership of the country. Against opposition from hardline Islamist factions, King Mohammed VI has instituted progressive revisions to the Moroccan family code (Mudawana), granting women their due divorce and inheritance rights as well as protections within the household. Since 2005, by order of the king, Morocco’s Islamic affairs ministry has begun certifying female Muslim preachers. Navigating the conservative precepts of Islamic legal tradition, the king introduced a new designation known as “Murshidat” (female religious guides), who share with the male imam in responsibility for administering a given mosque. In the course of their work, Murshidat serve to advance Islamic moderation and tolerance and curb radicalization. Couture writes, “This revolutionary development for the advancement of women in Morocco offered an opportunity for women to act as agents of positive change in their communities throughout Morocco.”

The institution of Murshidat is not easy to replicate in other countries: King Mohammed VI enjoys special latitude to innovate Islamic legal rulings through his status as the country’s supreme religious authority. That said, the king of Jordan enjoys a similar status in his country. Some governments in the Gulf have capacities of their own to introduce top-down religious reform via state institutions. Egypt’s venerated Al-Azhar Islamic seminary, a source of guidance and inspiration to Muslims worldwide, also has the requisite power to move the interpretation of Islamic legal precepts forward. Since all these countries have been sources of recruits to the likes of ISIS, and all share an interest in combating it, their respective leaders and institutions should examine the Moroccan model and consider adopting it in some form.

Female Islamic leadership has also been the subject of intense discussion among Muslims in the West. In 2005, American Muslim scholar Amina Wadud ignited a firestorm of controversy by leading Friday prayer for a congregation of about 60 women and 40 men. Though some quarters of the American Muslim community consider her actions a violation of Islamic law, she has also won a growing number of champions in her country as well as an Europe — and even begun to press her case inside the ancient heartlands of Islam. Between progressive efforts like Wadud’s in the West and the beginnings of similar reform in Morocco, it is possible to envision a new dynamic, whereby mainstream Muslim communal life offers an alternative role model to Muslim women — whether Muslim-born, or converts to the faith.

Greater international cooperation to advance all these efforts is an urgent matter in the struggle to defeat jihadists in Syria and Iraq, as well as the ideas they have been promulgating with alarming effectiveness, far and wide.

Middle East specialist Joseph Braude is the author, most recently, of The Honored Dead (Random House, 2011), and is now at work on a book about Arabic media.