Tensions in Asia are Rising: How Strong is the U.S.- Australia Relationship? 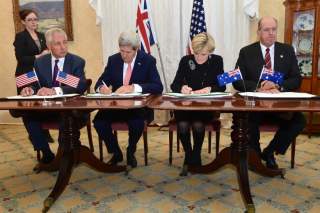 With the annual Australia–US Ministerial Consultations (AUSMIN) recently concluded in Sydney, it’s a good time to reassess the broader Australian–US strategic relationship. I want to frame that assessment here by employing a SWOT analysis. The methodology is clunky but simple enough to allow a set of insights about the relationship’s strengths, weaknesses, opportunities and threats. I’ve allowed myself three of each, as follows.

Three strengths: familial closeness, shared grand strategies, and a solid foundation. First, closeness. The Anglosphere’s our international family, and while it’s easy to mock the importance of belonging to an international family, states that don’t belong to one (like Japan) would beg to differ. Ties of blood and culture run deep. Second, grand strategy: the best long-term allies are those who essentially want the same thing. In grand strategy, Washington and Canberra both want a stable, liberal, prosperous global order. And that’s a good basis for long-term cooperation—because the tie isn’t just of blood but of interest. Third, the foundation: we both enjoy an alliance that’s over 60 years old and is as close today as it’s ever been. Both allies are still looking for new ways to cooperate in order to make the alliance more relevant to the 21st century.

Three weaknesses: time, place, and strategic personalities. After the Global War on Terror the U.S. is a weary Titan. That effect might last another five to ten years, but—over the longer haul—U.S. vigor will wax as well as wane. There’s a second, longer-term “time” factor, and that relates to the broader pattern of regional transformation: while the US rebalance to Asia is good, Washington’s rebalancing at a time when Western influence in the region is slipping because of the rise of regional great powers. Second is geography. At the best of times, Australia’s not Washington’s top priority—geographically we sit too far back from a strategic order essentially built along the Eurasian rim lands. True, the shift of strategic weight in Asia is changing that, to some degree—but we’re never going to be as relevant as front-line U.S. partners. Finally, personalities: the U.S. and Australia are two different strategic personality types: Americans are Extroverted, Intuitive and Feeling; Australians are Extroverted, Sensing and Thinking. In short, we‘re British empiricists, they’re the City on the Hill. There’s a messianic core to U.S. strategic policy that isn’t replicated in ours.

Three opportunities: a more receptive Asia, a U.S. more interested in Southeast Asia, a treaty with an in-built capacity to engage. Evidence of the more receptive Asia abounds. Regional countries want to do more with both the US and Australia. Japan’s the obvious example, but others aren’t as far behind as some think. It wasn’t always thus: remember, we couldn’t do much more with Japan before Abe, nor much more with Indonesia before SBY. A second opportunity, a shifting U.S. perception of Southeast Asia. Washington has traditionally seen that sub region as a set of sea-lanes, and after 9/11 as a possible second front in the War on Terror, but it’s finally coming to see it as a set of influential players at the intersection of two key oceans. Third, both the U.S. and Australia are classic networkers. And the ANZUS treaty already gives them scope (in the unused Article 8) to do more networking together in the regional context. I’m amazed we aren’t doing it.

Three threats: complacency, category mistake, and distraction. Let’s start with complacency, because that’s the most insidious threat to the relationship. There’s something of a danger on both sides of the Pacific that capitals will treat the relationship as “business-as-usual.” Oddly, the simple regularity of AUSMIN actually increases that danger, reducing high-level political commitment to the alliance to an annual ministerial meeting. We need to work to sustain a broader base of political engagement. Second, the threat of the category mistake: that we come to see ANZUS as a barrier to our closer engagement with Asia, rather than an enabler of such engagement. It’s a simple mistake to slip into, and it typically follows from seeing ANZUS as a strategic hangover from a different era. And finally, there’s the threat of distraction. Distraction can come to both capitals from a range of sources. Washington can easily be distracted by more urgent priorities, both domestic and international; but so too can Canberra. Despite the excitable tones in which the future of our strategic partnership with the U.S. is sometimes debated, the real threat isn’t that our relationship will be ruined by disastrous war, nor even that it’ll be traded away to accommodate China: it’s that the relationship will be eaten out from the inside, leaving a hollow, reactive partnership in the place of a substantive, proactive one.

Rod Lyon is a fellow at ASPI and executive editor of The Strategist, where this article first appeared here.