Tensions in the South China Sea are rising: What Should Australia do? 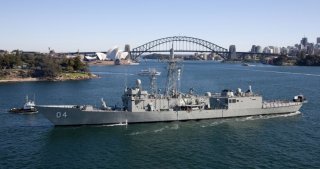 China continues to try changing the status quo in the South China Sea (SCS) through bullying its smaller neighbors and creating more facts on the ground. After moving an oil rig into an area contested by both China and Vietnam last month, Beijing is apparently planning to send a second one into the area. Meanwhile, it’s apparently constructing an airstrip and sea port on Fiery Cross Reef, a move which could see the People’s Liberation Army (PLA) strengthen its military reach into the SCS through the deployment of shorter-range tactical aircraft. That comes amidst ongoing tensions between China and the Philippines over the Scarborough Shoal, as well as growing concerns in Malaysia and Indonesia about China’s territorial ambitions.

Let’s face it: China’s determined to push Southeast Asian countries into accepting what it perceives as its rightful territorial claims within the "nine dash line." Scott Snyder isn’t alone in concluding that under President Xi Jinping’s leadership “China’s ability to exert its own sphere of influence in Asia is regarded as an expected benefit that will naturally accrue, regardless of the impact on the neighborhood.” The New York Times editorial board has also expressed concern about China’s "power grab" in the SCS.

Chinese leaders seem to believe that the price for their consistent violation of established norms of behavior in maritime disputes won’t outweigh the benefits. They likely base that judgment on at least three assumptions:

·       that the United States, which has drawn a "red line" in the (maritime) sand in East Asia by declaring that the Senkaku/Diaoyu Islands are covered by the US–Japan security treaty, finds it much harder to do the same in the SCS; and

·       that other external players such as Japan, India and Australia, won’t support the smaller regional claimant states.

The situation poses a serious challenge for Australia’s strategic policy. It’s tempting for Australia to leave it to the US and others to balance China’s maritime assertiveness in the SCS. Why should Canberra engage more strongly if ASEAN states aren’t willing to stand up to Beijing? After all, Australia is an external middle power with a strong interest in stable economic relations with China.

No doubt, those are strong arguments. But China’s strategy to change the maritime order in Southeast Asia challenges other, potentially even more important, Australian interests. It undermines the core principles of a rules-based order in maritime Asia. That affects not just values but the central tenets of maritime trade upon which Australia’s economy depends. Moreover, if successful, Beijing’s quest for maritime hegemony in the SCS would erode our ally’s position in the region, thereby also undermining a key pillar of Australian defense policy, namely that no potentially hostile power should dominate that area. While China isn’t an enemy of Australia, there are doubts over its future strategic trajectory.

In sum, Australia has a fundamental interest in supporting a stronger regional response to China’s maritime coercion in the SCS. The question is, how? Two things come to mind. First, more is required to deconstruct China’s strategic narrative regarding its claim in the "nine-dashed line." The US recently took the step of publicly calling those claims ‘fundamentally flawed’ to undermine China’s "lawfare" strategies. At the recent Shangri-La Dialogue, Australian Defense Minister David Johnston joined the US and Japan in criticizing China’s "destabilizing" behavior in the SCS. A further step would be to renew calls on all claimant states, including China, to shelf their claims and to engage in joint resource exploitation. Such an arrangement has been critical in managing the Taiwanese–Japanese dispute over the Senkaku/Diaoyutai/Diaoyu islands. Joint exploration and the shelving of disputes have also featured previously in official Chinese policy—and Chinese officials should be asked to explain the problems with such an approach in the SCS.

Second, the government should think about ways to quietly strengthen the capabilities of Southeast Asian countries to counter China’s maritime coercion, which often involves an integrated approach using civilian, paramilitary and military forces. Most Southeast Asian countries are poorly equipped to deal with that challenge, despite some efforts, for example by the Philippines, to rectify deficiencies. Australia’s regional defense engagement strategy should focus on capability areas, which are critical for their ability to monitor and counter Chinese maritime harassment. That doesn’t necessarily imply highly sophisticated military hardware, which would probably overwhelm those countries’ ability to operate and sustain such systems, and be provocative to China. Rather, it could include training in maritime law enforcement, as well as strengthening maritime surveillance and coast guard capabilities.

Benjamin Schreer is a senior analyst at ASPI. This article was originally published by ASPI’s The Strategist here.