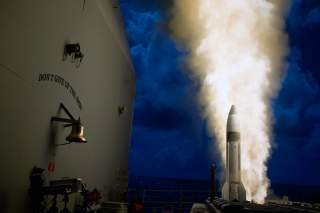 The United States is already shielded by the Ground-based Midcourse Defense system, with launch sites in Alaska and California that can fire huge missiles to intercept ICBMs in space. However, the GMD system currently has only a limited supply of forty-four, and has only hit its target in slightly over half of tests.

By contrast, THAAD is designed to smack down missiles as they plunge on their targets in the terminal phase of their trajectory, and has not failed a single interception test.

However, the deputy director of the Missile Defense Agency subsequently stated it had “received no tasking” for West Coast THAAD sites, and later Rogers appeared to deny making the claim.

It so happens that there’s a little problem with deploying THAAD to the West Coast: nearly all sources agree it’s designed to shoot down short- and intermediate-range ballistic missiles, not ICBMs.

A ballistic missile in its terminal descent phase offers an interceptor system only a very small window in which it can be shot down before it detonates its warhead. A THAAD interceptor flies at Mach 8—more than three times the speed of a rifle bullet—and can hit target up to 150 kilometers high. However, this is still not fast or far enough to reliably hit ICBMs, according to most experts.

The farther a ballistic missile is designed to go, the higher and faster it must fly. This means that super long-range ICBMs travel at speeds around over twenty times the speed of sound and can fly up to thousands of kilometers above the Earth’s surface, making them much more difficult to intercept than shorter-range ballistic missiles, even when diving back to the surface in the terminal phase. To have a good shot at an incoming missile, interceptors of comparable speed are preferred.

This does not mean interception by slower missiles is strictly impossible. THAAD is claimed to have a limited capability for low-altitude ICBM interception. That is to say, it can try, but the odds of success would likely not be high.

Another issue is that THAAD has an effective range of around 124 miles—and possibly less versus an ICBM threat. While that suffices for defending a geographically confined area like the Korean Peninsula, across the sprawl of North America, two THAAD sites would mean defending just two metropolitan areas. So, hypothetically, the Los Angeles and San Francisco areas might receive the extra protection—while, say, Phoenix, Seattle and Portland could be out of luck.

At any rate, the latest Hwasong-15 rocket demonstrated sufficient range to fly across the continental United States, so a missile attack could simply be targeted at cities without THAAD. While this might have the benefit of making the closest, most densely populated cities less attractive targets, it would not help that much in protecting the nation as a whole unless batteries were deployed around all major cities. And that’s only assuming THAAD provides a useful ICBM defense in the first place.

Lockheed has proposed creating a THAAD-ER system, with an improved seeker and a two-stage rocket, giving the interceptors three times the range; supposedly, it could be operationalized in four years. While THAAD might conceivably have its ICBM-intercept capabilities improved, THAAD-ER and other upgrades exist only as design concepts for now.

One potential argument for West Coast THAAD batteries would be to defend against a potential North Korean submarine-launched ballistic-missile (SLBM) attacks. In August 2016, after numerous failed attempts, North Korea made its first successful test launch of an SLBM, the Pukkuksong-1, from a specially-designed Sinpo-class submarine.

The Pukkuksong-1’s exact capabilities are unclear, but at best it only qualifies as a medium-range ballistic missile—a type that THAAD is designed to engage. Furthermore, an SLBM launched closer to the U.S. coastline might give defenses less time to execute a midcourse interception, making a terminal interceptor a desirable backup.

However, the Sinpo-class submarine is an old-fashioned diesel submarine that would struggle to cross the Pacific, given its estimated operational range of only 1,500 miles and limited underwater endurance and acoustic stealth. The current version is unlikely to be able to enter within attack range of the U.S. mainland, though it could pose a threat to Pacific bases like Guam.

Of course, Pyongyang is undoubtedly working to improve the range of the submarine and its missiles. A new, larger Sinpo-C submarine was photographed under construction late in 2017, and an improved Pukkuksong-3 SLBM is believed to be in development.

It could be argued that the cost in lives of having a nuclear warhead land on a U.S. metropolis would be so great that even defense systems with a low hit probability are worthwhile investments.

But that fails to consider that there may be more effective alternatives to THAAD for this mission. To start with, the GMD system already does provide protection of the entire mainland United States, and could use improvements, particularly to its ability to discriminate ICBM warheads from debris and decoys.

One concept under consideration by Congress is building a third GMD site on the East Coast of the United States. While this might enable a new “shoot-look-shoot” strategy for countering missile attacks, analysts believe it would be of limited benefit—the East Coast is already protected—and the MDA is not in favor of building a third site.

Another approach would be to dedicate Navy SM-3 Block IIA missile interceptors for defense of the continental United States. The SM-3 is currently deployed aboard U.S. and Japanese cruisers and destroyers, and a land-based version, Aegis Ashore, will be installed for defense of Japan and eastern Europe.

The SM-3 is only intended to defend against medium- and intermediate-range ballistic missiles. However, the SM-3 Mark IIA has nearly twice the maximum speed of THAAD at Mach 15, and a vastly greater range of 1,350 miles. The MDA and some independent experts claim the SM-3 could potentially be viable in an anti-ICBM role, striking the missiles post-apogee at the end of the midcourse phase before reentry into the atmosphere. You can see a screen capture of a chart from the MDA showing the SM-3’s ICBM-engagement envelope here.

According to one analysis, three or four BDM-capable ships armed with SM-3s could provide nearly comprehensive coverage of the United States—which is not to say that they would successfully intercept every time, of course.

Several dozen Aegis ballistic-missile defense ships armed with Block IIA missiles are already operational. However, they remain much in demand to protect overseas assets and fleets at sea. As an alternative to committing the valuable vessels, the Pentagon could procure ground-based Aegis Ashore batteries. There is also a ground-based test launcher in Hawaii that could be converted for operational use at reasonable cost.

However, like the GMD system, the SM-3 is a midcourse exospheric-only interceptor, not a terminal interceptor like THAAD. Thus, it would only supplement the defensive envelope of the GMD, rather than provide an additional terminal-phase layer of defense.

Still, the SM-3 seems better suited to intercepting ICBMs than THAAD. Admittedly, the naval missile has only been tested against IRBM-type targets or lesser, not ICBMs. The SM-3’s records in those tests is better than the GMD’s but far from perfect—the last test, on June 22, 2017, failed, though this was reportedly not a technical failure but due to human error, when a sailor misidentified the practice target as a friendly.

The SM-3 may also be fast enough to serve as a boost-phase interceptor by swatting an ICBM while it is rocketing off from its launch facility and hasn’t attained high speed or altitude. Indeed, the above-linked chart by the MDA notes the ascent-phase as coming under an SM-3’s interception envelope. However, such a strategy would require a BMD ship deployed close to the launch site, and sensors would need to acquire the ascending ICBM very quickly before it accelerated beyond the engagement envelope.

Stealth fighters armed with AIM-120D air-to-air missiles have also being proposed for boost-phase interception—though the idea remains impractical for a number of reasons—and laser-armed drones are being developed to perform such a mission in the future.

While there may be circumstances in which THAAD could defeat an ICBM, the bulk of available evidence and analysis to date does not support the notion that it would be very effective in this role. Indeed, even systems expressly designed for ICBM-interception frequently fail in tests.

This leaves one reason to suspect that the proposals for West Coast THAAD batteries arise from a misunderstanding of the technologies involved and a desire to boost confidence, rather than out of a technically sound plan to improve national security.