Thailand is Broken: Can the Military Come to the Rescue? 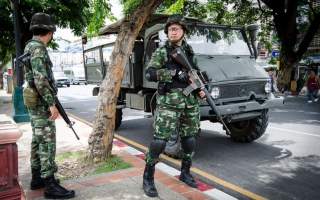 The Thai military's declaration of martial law on May 20, 2014 and the seizure of power is universally seen and in many quarters condemned as anti-democratic. An alternative viewpoint would see the coup as an opportunity to break Thailand's political impasse and to develop a constitutional framework that is more legitimate and democratic.

Thailand's political framework is broken and beyond incremental repair. Thailand needs a new constitutional framework that accommodates all actors and dynamics and paves the way for election of a government that will be perceived as legitimate by all groups. The military coup could be an opportunity to do this. For this to happen, however, the military must not ally with rival political groups. It must act in a genuinely nonpartisan manner and commit itself to developing a new political framework. The military must of necessity limit its role in interim rule and clearly eschew interest in long-term governance roles, direct or indirect.

As demonstrated by the 2006 experience, the military cannot rule Thailand even if it so wishes. The military ruled Thailand for prolonged periods since 1932, but the era of direct or indirect military rule is long past. Popular sovereignty has become entrenched in Thai society and the economy has become highly complex.  The public will not accept military rule except perhaps as an interim necessity. Hopefully the Thai military recognizes the transformation of Thai society and will not attempt to govern on a prolonged basis. Attempting to do so could render the military the object of civilian political resistance. If the military acts in a partisan or vindictive manner it will further entrench and complicate the political conflict.

The primary political task of the military now should be development of a new political framework that is more democratic and legitimate in the eyes of all key actors. If possible, it should act in concert with the king, who has enormous moral authority. The military must demonstrate it is acting in a nonpartisan manner for the Thai national interest. To demonstrate its sincerity and commitment, the military should set a firm deadline for interim rule. It must also urgently seek a nonpartisan interim civilian prime minister of high standing (like Anand Panyarachun in an earlier era) and enable that person to govern without restrictions until a new constitutional framework is drafted and approved by the Thai polity. Acting genuinely in a nonpartisan manner will enable the Thai military to restore its credibility as an unbiased state institution. It can emerge from this crisis with an enhanced image and reputation for "saving" Thailand.

Thailand has been mired in political conflict since the 2005 mass protest against abuse of power by then Prime Minister Thaksin Shinawatra and his subsequent ouster in 2006. The present crisis is the latest phase in that conflict.  Political actors and dynamics in Thailand since 2005-6 appear to have outstripped political institutions and a framework that appeared legitimate in an earlier era. The military and to a lesser degree certain members of the royal family became involved in partisan politics, leading to an erosion of their moral authority to act in crisis situations. There is now no institution or process that can compel the warring political parties and civil society movements to resolve differences.

Having lost legitimacy in the eyes of some key actors, the post-1991 political framework cannot resolve the conflict confronting Thailand. Elections under that broken framework will only perpetuate and aggravate political conflict. The Yingluck Shinawatra government's effort to legitimate its power through an election, for example, was resisted by the Royalist alliance. Boycotting scheduled elections, it sought to unconstitutionally oust and replace the Yingluck government. That episode accentuated the stalemate.  The military coup has the potential to break the impasse that has engulfed Thailand for a decade and pave the way to a more acceptable and durable political order.

If that goal is to be realized, the military must move swiftly in a nonpartisan manner to appoint an interim prime minister as well as institute a representative body to craft a more legitimate democratic political framework that should eventually be approved by the Thai body politic. Elections under that framework would pave the way for a new legitimate government. In addition to "fighting the last war" that new framework should be forward looking with due attention to new actors and dynamics as well as processes for resolving future conflicts.

At a minimum, it should be a federal arrangement that devolves substantial legislative, administrative, financial, and cultural powers to democratically elected provincial governments in greater Bangkok, northeastern Thailand, southern Thailand and other regions of the country. Devolution will reduce the centrality of the federal government and the intensity of competition for power at the center. A federal political framework would also strengthen democratic legitimacy, as it would enable power and decision-making in centers closer to the people.  A federal structure and devolution would help defuse the tension and conflict between a largely Bangkok-based urban middle class and a rural northeastern Thailand that support rival political groups vying for power in Bangkok. Devolution may also help promote a more plural Thai identity that can help ameliorate and possibly resolve the southern problem that has plagued Thailand for about 100 years.

The objective of the new constitutional framework must be greater substantive democracy that protects and advances individual and group rights and obligations, enables effective representation and democratic governments at the federal and provincial levels, and legitimate authority from the perspective of all key actors. The military must play and be perceived as playing a genuinely nonpartisan role in the effort to develop a new constitutional framework.

The May 22, 2014 coup could provide an opportunity to break Thailand's political impasse. To play that role effectively, the Thai military must rise above partisan politics and act in the genuine interest of Thai political development.

Dr. Muthiah Alagappa is a non-resident senior associate at the Carnegie Endowment for International Peace in Washington, DC. The above article was originally published by CSIS: PACNET here.