The 10 Craziest Guns the U.S. Military Ever Used 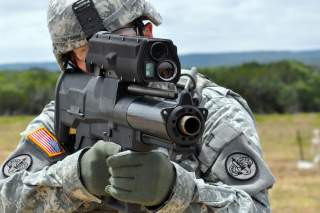 The Mark 23 certainly met all the the requirements of the OHWS program. It was reliable, having averaged around 6,000 rounds before a failure in testing. It boasted match-grade accuracy. The rail-mounting system for the laser-aiming module and light was innovative for the time.

But the Mark 23 was perhaps over engineered. The weapon was often derisively called the “world’s first crew-served handgun,” due to its large size when compared with other combat handguns of the era. The gun would become more iconic in the hands of movie and video game characters rather than special operators. While the Mark 23 may not have been the best fit for SOCOM, the trend of .45 ACP pistols continues; in 2011, SOCOM purchasedthe Heckler & Koch HK45 Compact to replace the Mark 23.

More conversion kit than standalone weapon system, the Close Quarters Battle Receiver is still an important step in the development of the M16 family of weapons. Designed to work with the M4 carbine lower receiver, the CQBR consists of an upper receiver assembly with a 10.3-inch barrel. This is about four inches shorter than the standard M4 barrel length, making for a compact weapon. Short barrels cause problems with the M16-style gas impingement systems, so modifications were made to the CQBR’s gas block to ensure reliable function. The assembly also featured the standard Knight’s Armament Company rail-attachment system. The CQBR was designed by Naval Surface Warfare Center, Crane Division in order to fulfill a Naval Special Warfare requirement for a 5.56 mm weapon that could be maneuvered through the tight confines of ships being boarded and seized by SEAL teams.

The CQBR’s development marked a sea change in close-quarters weapons. By solving several of the teething issues that previous short-barreled M16 variants suffered, the CQBR led to the decline in popularity of submachine guns. Special operations units could now have a short carbine in the same size as a pistol-caliber submachine gun, all while firing the much more potent 5.56 mm round. The CQBR kit morphed into a full pre-built gun with the Mark 18, which remains in use with upgraded accessories from the Special Operations Peculiar Modification Block II program.

This 7.62 mm rifle brings a Cold War concept into the 21st century. The Mark 17 comes from FN Herstal’s family of weapons that was selected by SOCOM as part of the Special Operations Forces Combat Assault Rifle program in 2004. The two primary elements of the SCAR family are the 5.56 mm SCAR-Light and the 7.62 mm SCAR-Heavy. Both were initially adopted by SOCOM for as the Mark 16 and Mark 17 respectively. But in 2010, SOCOM announcedit was cancelling orders of the Mark 16 in favor of the Mark 17.

The reason for this reversal was a matter of roles. The 5.56 mm Mark 16, while not a bad weapon by any stretch of the imagination, did not offer a dramatic difference in performance compared to the M4 carbine it was supposed to supplant. On the other hand, the Mark 17 brought an old concept into the modern age: the battle rifle. At the beginning of the Cold War, many infantry rifles still chambered full-power rifle ammo like the 7.62 x 51 mm round. These weapons were superseded by the development of intermediate caliber weapons like the M16. But once the United States found itself fighting in Afghanistan after 9/11, it was clear that 7.62 mm rifles were better suited to the extreme ranges found in theatre. Surplus M14 rifles were pressed back into service with some modern upgrades as a stopgap, but it wasn’t enough. The Mark 17 fulfills the battle rifle role with modern AR-style fire controls, a rail systems, and better ergonomics than the old M14.

The SCAR family continues development with SOCOM, as the Mark 17 has been upgraded to be a common receiver capable of switching between calibers. FN Herstal developed a modified version of the Mark 16 for the Marine Corps Infantry Automatic Rifle competition, but lost to Heckler & Koch’s entry. The weapon was also considered during the Army’s aborted Individual carbine competition that was looking to replace the M4 in service.

An advanced weapon, the XM25 rose from the ashes of a failed rifle program. It was originally designed as part of the XM29 Objective Individual Combat Weapon, an attempt to make a computerized assault rifle coupled with an 20 mm airburst grenade launcher. The program was canceled in 2005, but the airburst concept lived on. Enlarging to 25 mm grenade rounds, the XM25 Counter Defilade Target Engagement System began operational testing in 2010.

The bullupu-style XM25 feeds from a five-round magazine. It uses a laser rangefinder to determine when to detonate the round to engage the designated target. The airburst function makes it simple to engage target behind cover or inside structures. The XM25 earned a reputation for lethality in Afghanistan, with troops nicknaming it the “Punisher”.

After some delays due to safety malfunctions, the XM25 is now undergoing qualification trials with the Army. If all goes well, troops could be carrying one of the most advanced small arms ever designed as soon as 2017.