The A-10 Warthog Is a Killer on the Battlefield (And the U.S. Air Force Intends to Keep It That Way) 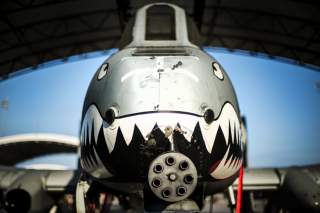 The Air Force A-10 replacement strategy could involve building a new plane, adjusting an existing aircraft or merely upgrading the A-10 itself.

The Air Force is beginning to work on how fast, lethal, durable and capable a new “A-10”-like aircraft would need to be in order to provide U.S. military ground troops with effective close-air support for decades to come.

Following an announcement earlier this year from Pentagon leaders that the A-10 will not begin retiring but rather will serve until at least 2022, Air Force and DoD officials are now hoping to keep a close-air-support aircraft for many years beyond the previously projected timeframe.

This kind of firepower, coupled with its 30mm cannon, titantium armor plates and built-in redundancy for close-air-support, makes the A-10 a valuable platform for potential larger-scale mechanized, force-on-force type warfare as well. The A-10 has a unique and valuable niche role to perform in the widest possible range of combat scenarios to include counterinsurgency, supporting troops on the ground in close proximity and bringing firepower, protection and infantry support to a large-scale war.

Air Force officials have told Scout Warrior that the current approach involves a three-pronged effort; the Air Force may consider simply upgrading the existing fleet of A-10s in a substantial way in order to extend its service life, acquire an off-the-shelf existing aircraft or develop a new close air support platform through a developmental effort.

“We are developing that draft requirements document.  We are staffing it around the Air Force now.  When it's ready, then we will compare that to what we have available, compare it to keeping the A-10, compare it to what it would take to replace it with another airplane, and we will work through that process,” Lt. Gen. James Holmes, Deputy Chief of Staff for Strategic Plans and Requirements, told reporters.

Holmes went on to explain that the service was, broadly speaking, exploring ways to achieve, preserve and sustain “air superiority” in potential long-term, high-end combat engagements. He added that considerations about a close-air-support replacement aircraft figured prominently in the strategic calculus surrounding these issues.

As a result, the Air Force will be looking for the “optimal” type of close-air-support platform by weighing various considerations such as what the differences might be between existing aircraft and future developmental platforms.

Cost and affordability will also be a very large part of the equation when it comes to making determinations about an A-10 replacement, Holmes explained.

“The question is exactly where is the sweet spot as we talked about between what's available now and what the optimum CAS replacement would be.  We are working along that continuum to see exactly what the requirement is that we can afford and the numbers that we need to be able to do the mission,” Holmes added.

Several industry platforms, such as Raytheon’s T-X plane and the A-29 Embraer EMB Super Tucano aircraft, are among options being looked at as things which could potentially be configured for a close-air-support plane.

Having the requisite funds to support this would be of great value to the Air Force; Air Force Chief of Staff Gen. Mark Welsh recently told lawmakers that, despite the prior plan, the service did not want to retire the A-10.

Prior plans to retire the fleet of A-10s were purely budget driven, senior Air Force leaders have consistently said.

“I don’t want to retire it,” Welsh told a Congressional Committee in early March.

Air Force leaders had previously said that the emerging multi-role F-35 would be able to pick up the close-air-support mission. With its sensor technology, 25mm gun and maneuverability, there is little question about whether the F-35 could succeed with these kinds of missions. At the same time, there is also consensus that the A-10 provides an extremely unique set of battlefield attributes which need to be preserved for decades.