The 2 Things That Could Make Japan Increase Military Spending (No, Not North Korea) 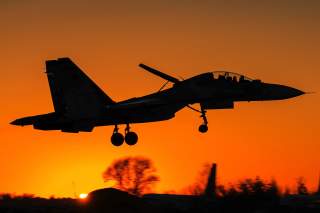 Amid talk of Beijing and Moscow playing a role to defuse the confrontation with North Korea, actions by China and Russia’s air forces around Japan would seem to be adding pressure on Tokyo to boost military spending.

Russian and Chinese military aircraft are probing Japanese air defenses at a rate not seen in over a decade, causing repeated scrambling of Japan’s Air Self-Defense Force (JASDF) jets.

In the final week of August, for example, 6 Chinese H6 bombers skirted Japanese airspace as they flew between Okinawa and Miyako Island from the East China Sea for the first time, encircling Japan from the south and east.

The bombers then returned home along the same flight path, a route that will be flown again, the Chinese Ministry of National Defense said.

While there was no intrusion into Japan’s airspace, the JASDF scrambled fighters to track the bombers and later inquired of China what was the purpose of the flights, then Defence Minister Fumio Kishida said at a press conference on August 25

At almost the same time, Russia dispatched its own group of Tupolev-95MS “Bear” nuclear-capable bombers, escorted by Russian Sukhoi-35S fighter aircraft and A-50 early warning and control planes.

The warplanes flew from the Pacific Ocean over the Sea of Japan, the Yellow Sea and the East China Sea. Both Japan and South Korea dispatched fighters to monitor the Russian aircraft.

These two seemingly unrelated bomber missions, which happened while joint US-South Korean military exercises were underway, are part of a surge in demonstrations of Chinese and Russian airpower in the region.

Japan recorded more than 850 such events in the year ended March 2017 that required the scrambling of its F-15J fighter aircraft.

The other pattern seen is scramblings triggered primarily by Chinese aircraft in 2016 and now by the Russians in 2017.

JASDF fighters were dispatched on 594 occasions from April to October 2016 up 73% from 343 in 2015. The majority of the scrambles, or 407, were in response to Chinese military aircraft.

Then, according to statistics released by Japan’s Ministry of Defence in July, the number of intercepts involving Chinese aircraft fell to 101 in April to June of this year from 199 in the same period in 2016.

At the same time as JASDF intercepts of China jets fell, scrambles for Russian aircraft climbed by more than a third this year to 125.

While a pattern does seem to emerge, military analysts do not see evidence of deliberate coordination between the Russian and Chinese air forces in Northeast Asia.

“A Russia-China air defense pact is not the kind of thing the two would be likely to agree upon. Russia and China are not formal allies,” said Paul Schwartz, a Russian military strategy and operations expert at the Center for Strategic and International Studies in Washington, DC, via email.

Russia and China did conduct a joint missile defense exercise in 2016 – a tabletop exercise held in Moscow – after deployment of the US THAAD missile defence system in South Korea was announced, said Schwartz. A second such exercise in 2017 has not materialized.

Russian and Chinese air forces could conceivably share intelligence and there are a few other things they might do to support one another.

“In the event of conflict between China and the US, for example, the Russians would probably be willing to resupply spare parts for military equipment previously-transferred to China, including aircraft. But it would depend on circumstances,” said Schwartz.

“Using its air defense systems and its combat aircraft, It would certainly be possible for Russia to engage air targets over these areas. But that would not be a decision the Russians would take lightly.”

Richard Weitz, director of political-military analysis at the Hudson Institute, echoed this view, saying that “Chinese and Russian armed forces do not rehearse integrated military operations to the same degree as, for example, do the US military drills with its NATO allies or South Korea and Japan.”

However, a March report by the US-China Economic and Security Review Commission entitled, China-Russia Military-to-Military Relations: Moving Toward a Higher Level of Cooperation concluded that “as Beijing and Moscow increasingly share overlapping interests and maintain a shared resistance to US leadership in the Asia Pacific, the two countries appear likely to further deepen defense relations in the coming years.

“In particular, Russian arms sales to China and military-technical cooperation could have significant consequences for the US, challenging US air superiority and posing problems for US, allied, and partner assets in the region.”

While attention has been given to flotillas of aircraft carriers and guided missile destroyers plying the seas in Northeast Asia in response to North Korean missile and nuclear tests, the skies above are also growing increasingly crowded and tense. Though much of it is unseen.

And the increasing presence of Russian military aircraft in and around Japan is proof that President Vladimir Putin is showing Moscow’s long term interests in the Far East are not to be downplayed.

Neither are Japan’s, and as China and Russia continue to flex military muscle in the skies above Japan, it may only push Tokyo down a path to further militarization.