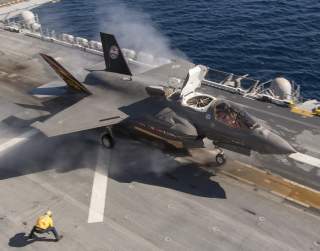 President-elect Trump has made it clear he intends to rebuild a U.S. military that has been underfunded and overextended. He wants to improve both the military’s capacity – adding 75,000 soldiers back into the Army, increasing the number of Marine Corps infantry battalions and building more Navy ships – and capability – providing, for example,  hundreds of additional modern fighters to the Air Force. He also wants to take on the waste that is inherent in any large, complex system with more than 3 million uniformed and civilian “employees” and spending nearly $2 billion a day.

There are lots to do for a military that has been at war for 15 years. Where should the new President and his national security team put their focus? The immediate problem is to shore up deterrence. President Trump’s ability to protect the American people and their homeland from attack, secure vital economic and political interests overseas and establish satisfactory relationships with countries such as Russia, China, North Korea and Iran will depend, in large part, on the credibility of U.S. military forces. Simply put, if competitors, prospective adversaries and so-called crazy states believe that no military options exist by which they can achieve their objectives, their only choice will be negotiations and compromise.

The problem is that the U.S. has spent nearly two decades investing in capabilities for counter insurgency but not for other types of conflict. This made sense at the time; the prospects for state-on-state conflicts seemed to have diminished significantly while violent jihadists were threatening to conquer entire countries. The U.S. military overall and our Special Forces, in particular, are really good at counter-terrorism, both technologically and operationally. But we underinvested in high-end conventional and strategic capabilities.

At the same time others, including potential adversaries, have been investing in advanced military capabilities, both quantity and quality. U.S. technological advantages are fast eroding. Russian ground and air forces pose a formidable challenge to U.S. and NATO forces in Europe. China is investing in air and sea power to, at a minimum, dominate the Western Pacific. Terrorist groups such as ISIS are operating advanced Russian anti-tank guided missiles that can kill our M-1 Abrams and Hezbollah may have as many as 100,000 rockets and missiles pointed at Israel.

Other nations were busily acquiring or modernizing their nuclear forces while the U.S. focused its attention elsewhere. Russia has begun deploying its monstrous heavy inter-continental ballistic missile (ICBM), the Sarmat, that can carry up to 12 nuclear warheads. It is modernizing its fleet of nuclear missile submarines and theater nuclear weapons. China continues to deploy new theater and strategic nuclear systems. North Korea is feverishly working towards an ICBM to carry its expanding arsenal of nuclear warheads. Even Iran could be a nuclear power in little more than a decade.

The President-elect recognizes that there is a need for immediate action to redress this imbalance in military power. Getting rid of sequestration will help to free up resources. But even more money will be required. However, even with more resources, there is the question of what to spend the extra funds on.

There will be a lot of temptation to invest in advanced, space age technologies; the kind of stuff the Carter/Work Pentagon has labeled the Third Offset. Resist temptation. These capabilities will take decades to reach fruition. Instead, our national security team needs to focus on what can be done to improve the posture of the U.S. military in the near-term.

Here are the five most cost effective near-term investments that the incoming administration should make.

Army: The last time the U.S. Army developed a new tank, infantry fighting vehicle, artillery piece or helicopter was in the 1980s. Before President Trump considers increasing the size of the Army he needs to modernize the equipment of today’s force. The Army has a plan to modernize its equipment but due to a lack of money it will take them decades to complete the process.

The new administration should focus on near-term enhancements (within five years) in lethality, force protection, electronic warfare and aviation.  Instead of upgunning one Stryker brigade and waiting three years for the next, do one a year. Plan to compete the upgrading of the Abrams, Bradleys and Paladins in five years.  Accelerate the modernization of the Apache and Black Hawk helicopter fleets through upgrades and new aircraft.  Also, add an existing active protection system to the armored fighting vehicles we would deploy to Europe or the Middle East in the event of war.  Buy enough WIN-T communications sets for at least half the brigades and higher headquarters.  Finally, accelerate the acquisition of the armored multi-purpose vehicle to improve the capability of our armored brigade combat teams.

Navy: Building a larger Navy will take time. What can be done in the near-term is to increase the acquisition of existing platforms. The next Secretary of Defense should reverse Secretary Carter’s decision to truncate the Littoral Combat Ship (LCS) program. Multiple independent studies have concluded that the Navy needs nearly double the planned number of LCS or LCS-derived frigates. Once a good frigate design is developed, we should buy both it and the improved LCS.  The new administration should match its desire to increase the number of Marine Corps combat battalions with additional amphibious warfare ships. The fleet needs to grow to a minimum of 38 and 43 would be better. Then the fleet of attack submarines needs to be increased.

One of the ways of improving the buying power of shipbuilding funds is by employing an investment strategy based on block buys and incremental funding.  We are buying the LCS and the Virginia-class nuclear-powered submarine in blocks and it really saves money. Incremental funding will allow the Navy to spread available acquisition dollars over more ships.

Air Force: The most important near-term action that can be taken to help the Air Force is to increase the annual acquisition of the F-35 fighter. Sixty a year would be good, 80 is better. This action would reduce the price not only of the Air Force variant of the F-35 but those bought by the other services and allies.

Strategic Forces: The Trump Administration needs to commit to modernizing all three legs of the nuclear TRIAD. The President should commit to the Columbia ballistic missile submarine, the Ground-Based Strategic Deterrent to replace the aging Minuteman ICBM and to a new air-delivered weapon without messing up other acquisition programs such as shipbuilding.

Space: Since every intelligence organization that has looked at the subject of military space has said the next major war will involve conflict in this domain, it is time for the U.S. to get serious about defending its space assets and being capable of taking out those of hostile powers. As Russia, China and other states invest more in space-based ISR, navigation and communications for their militaries, they are more vulnerable to having those capabilities degraded. The U.S. needs to invest in resiliency, redundancy and defense for our space assets. We also need to have a capability in hand to threaten the space assets of countries that can attack ours.

Some of the proposed near-term investments could be completed in the next five years. Others such as F-35 and LCS procurements or strategic forces modernization will go for many years. But even in these cases, the new administration can take steps in the near-term that will enable them to add immediately to the capability of U.S. military forces and the credibility of our deterrents.