The Air Force Is Asking a Big Question: How to Replace the F-22 and F-15 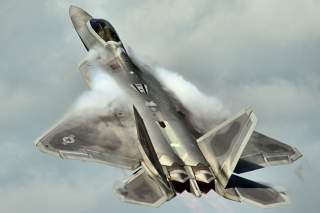 The United States Air Force has budgeted $500 million for its Penetrating Counter Air program to study a next-generation successor to the Lockheed Martin F-22 Raptor and the Boeing F-15C Eagle.

The idea would be to ensure that whatever comes after today’s air superiority fighters can ensure America’s command of the skies in the post-2035 environment. However, until the Air Force completes an analysis of alternatives (AOA), it will not know what exactly the PCA will look like.

“As far as next-generation air dominance, which is what Penetrating Counter-Air relates to. We have about $500 million in the budget this year to finish an analysis of alternatives,” Carolyn M. Gleason, Deputy for Budget, Office of the Assistant Secretary of the Air Force for Financial Management and Comptroller, told reporters at the Pentagon on Feb. 12. “As far as Penetrating Counter-Air, that decision really hasn't been made.”

As with any new effort, the Air Force has to perform a formal analysis of alternatives to fully understand its requirements. “We're still looking at that analysis, and we'll determine,” Gleason said. “We're not wed to any one platform, but will go forward based on the results of AOA.”

As Maj. Gen. John M. Pletcher, Air Force Deputy Assistant Secretary for Budget, explained, the Air Force has to undertake a detailed analysis of not only the threat environment of the future but also of the various ways to tackle the problem. Only when the service has figured out how to best take on tomorrow’s threats will the Air Force decide on what exactly it will ask contractors to develop.

While Air Force officials tend to demur when talking about the outcomes of AOAs, the fact is that even the name of the program offers hints as to what the outcome will be. A penetrating counter-air platform will be an air vehicle of some type—most likely an extremely stealthy manned aircraft because of the simply reason of positive command and control while penetrating into an anti-access/area denial environment.

Given statements from Air Force officials, it will also use electronic attack capability to supplement its stealth. The aircraft will also likely have the ability to fly at extended ranges to deal with the vast distances of the Pacific theatre and it will likely have a large magazine to deal with the same issue. It will almost certainly take advantage of next-generation adaptive cycle jet engines for fuel efficiency and speed. The only real question is how much emphasis it will place on maneuverability. It could—in some ways—more resemble a supersonic bomber than a traditional fighter.

But ultimately, only time will tell what the PCA will look like. But it will almost certainly surprise everyone when concepts eventually emerge.