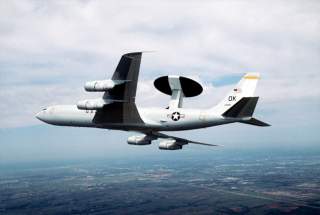 The emerging system, planned to reach full maturity in the 2040s, is called Advanced Battle Management and Surveillance (ABMS). It was introduced in the recently released Air Force 2019 budget.

“The budget proposes to change the way we execute battlefield management command and control in the multi-domain environment,” an Air Force official explained to Warrior Maven.

This initiative, carving out a new innovation-based short and long-term plan, articulates a much-deliberated Air Force path forward regarding the future of its JSTARS Joint Surveillance Target Attack Radar System platform. The emerging plan represents the manifestation of lengthy Air Force considerations about whether the large and “not-so-stealthy” manned JSTARS platform would remain functionally useful in a high-threat, high-tech modern threat environment.

ABMS seeks to harvest the latest ISR-oriented technologies from current and emerging systems as a way to take a very large step forward – and connect satellites, drones, ground sensors and manned surveillance aircraft seamlessly in real time across a fast-changing, dispersed combat area of operations. ABMS is described by Air Force officials as more of a “system” than platform-specific application. This technical approach is of great significance amid anticipated future threat scenarios wherein electronic attacks, cyber intrusions and GPS "jamming" weapons are both emerging and proliferating.

Over the longer term, the advanced ABMS suite of sensors and ISR technologies could integrate on a number of current and future air platforms, Air Force officials told Warrior Maven.

At the same time, the service is also identifying a near-term “bridge” or “interim” solution to meet combat commands while ABMS develops. This plan includes an immediate effort to modernize E-3 Airborne Warning Command and Control aircraft and upgrade the current JSTARS fleet through the mid-2020s.

“We propose to modernize 7 E-3 Airborne Warning Command and Control aircraft and keep the current E-8C JSTARS operational through the mid-2020s, as we develop and transition to an advanced battle management system,” the Air Force official said.

Air Force developers further specified to Warrior Maven that integrating advanced communications, networking and sensor capabilities onto an E-3G aircraft will “mitigate operational risk prior to the arrival of ABMS in the early 2040s.”

The current Northrop E-8C surveillance aircraft can identify an area of interest for drones to zero in on with a more narrow or “soda-straw” sensor view of significant areas below. JSTARS can detect enemy convoys, troop movements or concentrations and pinpoint structures in need of further ISR attention.

Air Force officials say the current ongoing competition to recapitalize JSTARS will continue alongside a commensurate or greater focus upon ABMS. The plan sheds some light on recent lingering questions about whether the service would continue its recap effort or replace it with something designed to operate more successfully in a high-tech modern threat environment.

Service developers have emphasized that the JSTARS recap will be a commercial derivative aircraft designed to keep pace with rapid technological changes and reduce life-cycle costs for the service.

JSTARS uses Synthetic Aperture Radar to bounce an electromagnetic “ping” off of the ground and analyze the return signal to obtain a “rendering” or picture of activity below. Since the electronic signals travel at the speed of light – which is a known entity – an algorithm can then calculate the time of travel to determine the distance, size, shape and movement of an object or enemy threat of high value.

JSTARS planes, which have been very active supporting combat operations in Afghanistan, have flown 130,000 combat mission hours since 9/11.

Although initially constructed as a Cold War technology to monitor Soviet Union tank movements in Eastern Europe, the JSTARS has proven very helpful in key areas such as near North Korea, Iraq and Afghanistan. The platform has also succeeded in performing maritime missions in the pacific theater, Southcom (U.S. Southern Command) and Central Command areas of responsibility.

The JSTARS has been able to help meet the fast-expanding maritime demand for ISR and command and control due to an upgrade of its radar to Enhanced Land/Maritime Mode, Air Force officials said.

While Air Force officials did not elaborate much on the various future threat conditions currently informing the calculus of decision-making, there has been much discussion of a broader need for air surveillance assets to operate in a more contested, high-threat, near-peer type warfare environment. Given these dynamics, broadly speaking, it makes sense that a larger, and therefore more detectable platform like JSTARS could be a more vulnerable target against adversaries with sophisticated weapons and sensors.

Accordingly, while JSTARS functions with great effect in lower threat combat circumstances, such as Afghanistan, where the US maintains air supremacy, its size, configuration and radar signature are such that it could potentially be more vulnerable to advanced enemy air defenses.

At the same time, the platform is known to add tremendous value in combat scenarios - and advances in aircraft defenses, countermeasures, electronic warfare and newer sensor technology, it seems, could potentially enable JSTARS to operate successfully against sophisticated enemy air-to-air weapons and ground-based air defense systems. Clearly, the aircraft is not intended to fly at the edge of combat, unprotected, against enemy fighter jets and air defenses - the question is what kinds of assets, emerging systems or supplemental technologies might be leveraged to expand its mission functionality in more contested areas?

An ability to address a high-threat electromagnetic warfare environment, by any estimation, is a likely focal point of the calculus regarding how best to equip large sensor platforms - such as JSTARS - for future combat environments. While many details regarding these kinds of technologies are, naturally, not available, engineering and upgrading an aircraft such as JSTARS with EW countermeasures or systems designed to minimize its electronic "signature" could indeed be fundamental to an ability to operate in sophisticated near-peer types of warfare scenarios.

It may be that other kinds of advanced countermeasures and aircraft protections, including the use of nearby unmanned drones as protection, could prove useful with respect to upgrading JSTARS to operate against advanced enemies.

There are other potential considerations or likely reasons why an upgraded current JSTARS aircraft might be positioned to operate with some success against sophisticated modern enemies; attack aircraft or stealth bombers could eliminate air defenses before a JSTARS enters a high-threat area of operation, thus enabling it to operate with great effect -- electronic jamming aircraft such as the EA-18 Growler equipped with a high-tech Next-Generation Jammer, also, could potentially detect and jam radar signals from enemy air defenses - and semi-autonomous drones operated from a JSTARS cockpit in the future might test enemy air defenses or assess the threat environment while the surveillance aircraft operates at a safer distance.

Moving into the future, there may be emerging assets able to perform these missions more effectively against extremely advanced enemies; newer EW and sensor technology, for instance, are rapidly evolving such that smaller, better protected platforms might have occasion to track wider areas at increasingly longer ranges - all while maintaining a lower radar signature. Faster computer processing speeds, enabling a smaller hardware footprint - coupled with more "hardened" networks and data links - might enable smaller, new platforms to gather, organize, analyze and disseminate crucial, combat-relevant information in near real-time.

In short, command and control technology is evolving so quickly, that the Air Force might wish to ensure it can consistently identify and leverage the best emerging technical solutions able to perform the requisite surveillance and command and control functions currently executed by legacy JSTARS planes.

Would emerging drone surveillance technology, historically thought of as providing a "soda-straw" view of areas below, be able to survey wide-swaths of dispersed terrain across a combat area of operations? Perhaps stealthy platforms, increasingly equipped with advanced sensor technology, could perform some of the wide-area command and control missions currently taken up by the JSTARS. It may be that a new JSTARS platform could operate in tandem with other systems, networks and aerial platforms able to assist the mission in higher-risk environments. In fact, this kind of cross-domain connectivity seems to be at the heart of what ABMS seeks to accomplish.