The Air Force May Soon Have a Deadly Light Attack Aircraft 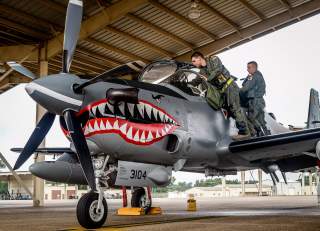 The United States Air Force has decided not conduct another OA-X Light Attack Aircraft demonstration during actual combat operations in the Middle East.

Instead, the service will continue to experiment with various sensors and data networks onboard the Textron Aviation AT-6 Wolverine and the Sierra Nevada/Embraer A-29 Super Tucano—which are the two leading contenders for a new OA-X aircraft—at bases in the United States. The idea would be to gather data for a future rapid procurement of one of the aircraft for service with the U.S. Air Force.

"Rather than do a combat demonstration, we have decided to work closely with industry to experiment with maintenance, data networking and sensors with the two most promising light attack aircraft — the AT-6 Wolverine and the A-29 Super Tucano," Heather Wilson, secretary of the Air Force, said in a statement. "This will let us gather the data needed for a rapid procurement."

The Air Force had originally signaled its interest in deploying both the AT-6 and the A-29 into actual combat operations in the Middle East after the initial Light Attack Experiment it had conducted in August 2017. But after further analysis, the Air Force has decided to continue experimenting with the two aircraft at Davis-Monthan Air Force Base in Arizona from May to July later this year.

According to the Air Force, the new experiment will focus on logistics and maintenance requirements, weapons and sensor issues, training syllabus validity, networking and future interoperability with partner forces. The service will also experiment with “rapidly building and operating an exportable, affordable network to enable aircraft to communicate with joint and multi-national forces, as well as command-and-control nodes.”

The Air Force has tried to procure a low cost light attack aircraft several times over the previous decades, but such efforts have inevitably floundered. However, given the sheer strain on the combat air forces, the service is looking at the OA-X as a means of taking the strain off its fourth and fifth-generation fighter force. Simply put, it makes no sense to use a stealthy $140 million Lockheed Martin F-22 Raptor—which costs tens of thousands of dollars per hour to fly—to destroy a drug lab in Afghanistan that cost only several hundred dollars.

"This effort to find a lower-cost and exportable aircraft for permissive environments is directly in line with the National Defense Strategy," Gen. David Goldfein, Air Force chief of staff said. "A light attack aircraft would not only provide relief to our 4th and 5th generation aircraft, but also bolster our interoperability, so we can more effectively employ airpower as an international team."

Indeed, after decades of flying over uncontested airspace using expensive fourth generation fighters such as the Lockheed Martin F-16 and the Boeing F-15E Strike Eagle to engage insurgents, the Air Force seems to have recognized the wisdom of investing in aircraft that are specifically tailored to that mission.

“The light attack effort supports our nation’s defense strategy to counter violent extremism on a global scale, alongside allies and partners,” the Air Force said in a statement. “A light attack capability could sustain competence in irregular warfare, maximize capability from financial investment, and harness existing, innovative technologies. A light attack aircraft option not only offers additional value and flexibility, but also accelerates modernization of current and potential partner forces who do not require advanced fighter aircraft.”

Indeed, international partnerships have been a component of the OA-X project since its earliest days. The service notes that five allied nations sent observers to the first phase of the Light Attack Experiment, and the Air Force plans to invite additional international partners to observe this second phase of experimentation.

Additionally, the Air Force is also sending an important signal to would-be contractors Textron and Sierra Nevada: the service is no longer merely billing the OA-X program as an experiment but rather a precursor to a rapid procurement. “The Air Force expects to have the information it needs to potentially buy light attack aircraft in a future competition, without conducting a combat demonstration, based on data collected during the first round of the experiment and future data anticipated to be collected in the next phase of experimentation,” the service said in statement.