The Air Force Is Slowly Killing Off the A-10 Warthog 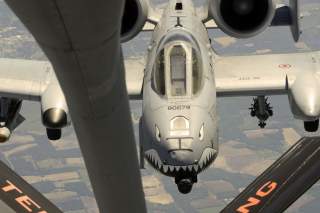 The U.S. Congress wants to keep the A-10 Warthog attack jet flying. The U.S. Air Force, not so much.

Lawmakers have repeatedly demonstrated their commitment to maintaining a dedicated ground-attack aircraft and, more importantly, an effective close air support capability. They have done so through legislation in successive National Defense Authorizations Acts since 2013.

In the most recent NDAA, Congress authorized $103 million for the Air Force to complete the job of installing urgently needed new replacement wings on the A-10 fleet. But a senior Air Force official recently told a meeting of A-10 personnel that the Air Force has no intention of fully implementing the re-winging effort and has no intention of keeping any more A-10s flying than the 171 that have already been upgraded, thus thwarting Congressional intent and legislation.

At the most recent A-10 Program Management Review meeting, Todd Mathes, the civilian A-10 Program Element Manager for the Air Force’s Air Combat Command, told the gathering of approximately 100 people involved with the program that the re-winging program “was not going to happen.”

This is according to people inside the room who are reluctant to speak publicly out of concern of retaliation. Previous senior Air Force officialshave accused those who speak out about efforts to undermine the A-10’s effectiveness of “treason.”

The re-winging program is necessary to keep 110 of the current 281 A-10s in a flightworthy status. The original wings are now rapidly nearing the end of their operational lifespans, particularly because A-10s deployed to combat are flying six times more than they do during peacetime. New wings will allow the aircraft to fly for at least another 20 years.

According to Mathes’s reported statements, as the wings wear out, the Air Force will allow the number of flyable A-10s to draw down to 171 aircraft. As the number of operational aircraft falls, so, too, will the number of A-10 squadrons, going from nine squadrons down to six. Six is exactly the number the USAF is planning for, according to Congressional testimony by Air Force Lieutenant Generals Jerry Harris and Arnold Bunch.

According to Rep. Martha McSally, a former A-10 pilot and squadron commander and current member of the House Armed Services Committee, six squadrons of A-10s would not be enough to meet the need of the troops in the field.

Over the last 25 years, the Air Force has repeatedly attempted to shrink or cancel the A-10 program despite the fact that it has proven itself to be the most effective and most in-demand workhorse of all the planes supporting ground troops in Iraq and Afghanistan. Congress has come to the program’s rescue many times.

Air Force Secretary Heather Wilson said in a December 2017 Senate Armed Services Committee hearing that the Air Force would begin building new A-10 wings if the funds to do so were restored to its budget. Congress authorized the funds, although it still remains an unfunded mandate until Congress passes the appropriations bill. Debate about the spending bill is still ongoing but the A-10 clearly needs to be a priority for readiness given current and future combat needs.

Boeing won the contract to build new wings for 242 A-10s in 2007. Air Force leadership deliberately allowed this contract to lapse in 2016 after only 171 aircraft received the new wings. Because Air Force officials allowed the earlier production line to shut down, they are now saddling the taxpayers with extra costs of more than $103 million to restart the wing production line.

“Pending approval of the FY18 appropriation, the Air Force plans to use the $103 million authorized in the FY18 NDAA to award a contract, establish a new wing production line and produce four additional A-10 wings,” an Air Force media-relations official said. “Establishing the production line will enable the Air Force to procure additional wings if the decision is made to do so in future budgets.”

The careful observer will note that neither Wilson nor the Air Force’s P.R. office is committing to fully updating the A-10 fleet. They are only committing to restarting the production line again — after the Air Force allowed the earlier contract to lapse — and building only four of the required 110 wingsets, which appears to continue a pattern of official Air Force hostility towards an aircraft and mission its leaders believe is beneath them.

In that context, Mathes’s recent statements are quite revealing. They demonstrate that the Air Force never had an intention to complete the re-winging project. Rather, it appears the USAF plan was and is to ensure that the aircraft with the older wings will “time-out.”