The Aircraft Carrier: The Weapon that Refuses to 'Sink' 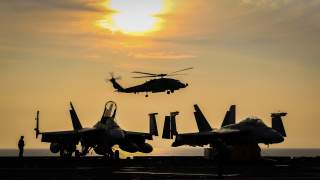 The aircraft carrier is the weapon whose obituary is constantly being written, but which also refuses to die. Twenty years ago, during the height of the “revolution in military affairs” craze, the aircraft carrier was written off as a dinosaur.

In a projected future where warfare was all about being small, stealthy, and fast, an 80,000-ton carrier was seen as too big and too cumbersome, while its function could be replaced by missiles and precision-guided weapons. Moreover, aircraft carriers were considered to be just “cruise missile magnets” — modern-day cannon fodder in the new 21st-century battlespace.

And yet more and more countries — particularly in Asia — are discovering the potential value of aircraft carriers. China and India are currently the only Asian countries operating large fixed-wing carriers, but they may soon be joined by new players, particularly Japan and South Korea (and perhaps others).

China recently launched its first completely domestically built aircraft carrier, the Type-001A. Displacing 70,000 tons fully loaded, and capable of carrying up to 48 aircraft, the Type-001A is a marked improvement over China’s first carrier, the Liaoning (the refurbished ex-Soviet Varyag).

India has operated aircraft carriers for more than 50 years, although until recently all of its carriers were second-hand, acquired from Britain or Russia. Currently, India operates one carrier, the 45,000-ton INS Vikramaditya (the ex-Russian navy Admiral Gorshkov, sold to India in 2004 and heavily rebuilt and refitted). More importantly, India has also constructed its own domestically built carrier, the INS Vikrant, which is currently undergoing sea trials and will likely be commissioned by 2020.

(Thailand also operates a “pocket carrier,” the 12,000-ton Chakri Nareubet; although configured for the use of AV-8S Harrier jump jets, all of Thailand’s Harriers are currently inoperable, and the Chakri Nareubet can only fly helicopters.)

To be sure, Asia’s current carriers have limits. They carry much fewer combat aircraft than the US Navy’s flagship Nimitz-class carrier, a 100,000-ton, nuclear-powered behemoth that can deploy at least 90 planes. In comparison, the Liaoning can carry only two dozen fighter jets and the Vikramaditya about the same.

In addition, current Indian and Chinese carriers suffer from the use of the “ski-jump” design: a curved ramp on the flight deck that permits aircraft to take off without using a complicated (and expensive) catapult. Unfortunately, a ski-jump design greatly limits the number of aircraft that can be operated at any one time. Just as important, fighter jets have to sacrifice weapons loads for fuel in order to take off, essentially making them flying gas cans. All these factors greatly limit the firepower and range of operations of these carriers.

Despite these limitations, more aircraft carriers are coming to Asia, and they are expanding in terms of numbers, capabilities, and operators. Both China and India are planning more carriers. India wants a minimum of three carriers, and China could build up to a half dozen. China is already working on its second indigenous carrier, the Type-002, which will be larger (at least 80,000 tons) and will likely feature a totally flat deck utilizing a catapult (possibly a state-of-the-art electromagnetic launch system, currently found only on the US Navy’s Ford-class). India is also considering catapults for future carriers.

Chinese and Indian carriers are also getting bigger and therefore more able to carry more aircraft. This could greatly expand their operational capabilities. There is even speculation that these countries could eventually incorporate nuclear power into their carrier propulsion systems, although this is likely decades away.

Just as important, at least two other Asian-Pacific countries — Japan and South Korea — are considering the idea of joining the club of Asian aircraft carrier operators. Both countries currently possess large open-deck assault ships (the Izumo-class in Japan, the Dokdo in Korea); although these flat-tops are currently used only for helicopters, they could become the basis for small fixed-wing carriers.

In fact, a recent article in Defense News suggests that both countries are looking into buying several F-35B fighter jets, the short-takeoff/vertical-landing variant of the Joint Strike Fighter. Both the Izumo and the Dokdo have flight decks long enough to accommodate the F-35B, although there is also speculation that ski-jumps could be added to these vessels (or new ships built) to expand their use.

Other countries could soon join in. Australia has acquired two Canberra-class assault ships, basically copies of the Spanish-built aircraft carrier, the Juan Carlos I. The Canberra even retains the ski-jump design of the Juan Carlos, and could, therefore, be quickly fitted for fixed-wing aircraft.

Singapore is also said to be looking into buying F-35Bs, which could be deployed on a new, open-deck amphibious assault ship that it is building.

Carrier symbolism should not be undervalued

Far from being written off, the aircraft carrier is continuing to undergo a rebirth. Even a handful of carrier-based fixed-wing aircraft — especially highly capable systems such as the US F-35B or the Russian Su-33 — could play a decisive role in battle and also likely shift regional balances of power, particularly in such places as the Taiwan Strait and the South China Sea. In addition, aircraft carriers can have a sizable symbolic and signaling effect (the “50,000-tons of diplomacy”) that should not be undervalued.

Finally, possessing sizable numbers of aircraft carriers could have enormous implications for how regional navies might operate in the future. In the case of China, it could likely mean the fundamental reorganization of the PLA Navy (PLAN) around Carrier Strike Groups (CSGs), with the carrier at the heart of a constellation of supporting submarines, destroyers and frigates — an amalgamation of power projection at its foremost. Such CSGs are among the most impressive instruments of military power, in terms of sustained, far-reaching, and expeditionary offensive force. A CSG-oriented PLAN could be game-changer in the Asia-Pacific.

Therefore, during the next decade or so, expect the number of aircraft carriers and the number of countries operating carriers, to expand, not decline.