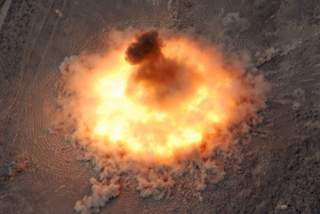 Russia has been using the devastating TOS-1 weapon against its foes in Syria, but the United States has also used its own thermobaric weapons against terrorists in Afghanistan and Iraq.

Since 2001, the United States has most recently used the BLU-118/B aircraft dropped thermobaric bomb, XM1060 40mm thermobaric grenade, Shoulder-Launched Multi Purpose Assault Weapon—Novel Explosive (SMAW-NE) and the AGM-114N Metal Augmented Charge (MAC) thermobaric Hellfire during the wars in Iraq and Afghanistan. In Afghanistan, particularly, the weapons proved to be ideal in rooting out Taliban and Al Qaeda fighters hiding in caves and tunnels. But the weapons have been singled out for criticism—even if they are perfectly legal—because of their effects.

The [blast] kill mechanism against living targets is unique—and unpleasant.... What kills is the pressure wave, and more importantly, the subsequent rarefaction [vacuum], which ruptures the lungs.... If the fuel deflagrates but does not detonate, victims will be severely burned and will probably also inhale the burning fuel. Since the most common FAE fuels, ethylene oxide and propylene oxide, are highly toxic, undetonated FAE should prove as lethal to personnel caught within the cloud as most chemical agents.

The effect of an FAE explosion within confined spaces is immense. Those near the ignition point are obliterated. Those at the fringe are likely to suffer many internal, and thus invisible injuries, including burst eardrums and crushed inner ear organs, severe concussions, ruptured lungs and internal organs, and possibly blindness.

The non-governmental watchdog also cited another 1993 Defense Intelligence Agency document titled “Future Threat to the Soldier System, Volume I; Dismounted Soldier—Middle East Threat” which states that while “shock and pressure waves cause minimal damage to brain tissue . . . it is possible that victims of FAEs are not rendered unconscious by the blast, but instead suffer for several seconds or minutes while they suffocate.”

But while the thermobaric ordinance are legal in combat, many non-governmental watchdogs have condemned the use of them because such weapons tend to be indiscriminate. But war is not a clean business even under the best of circumstances. There are instances where the U.S. military has no choice but to use thermobaric weapons—otherwise the troops would be placed in unnecessary danger or terrorists might able to entrench themselves in caves or buildings like in Afghanistan.

As such, both the thermobaric Hellfire and the SMAW-NE are weapons that were specifically developed for the Afghan war. “Marines could employ blast weapons prior to entering houses that had become pillboxes, not homes. The economic cost of house replacement is not comparable to American lives . . . all battalions adopted blast techniques appropriate to entering a bunker, assuming you did not know if the bunker was manned,” as an essay in the Marine Corps Gazette described.

Similarly, the AGM-114N Metal Augmented Charge (MAC) was developed because the conventional anti-tank Hellfire’s shaped charge is insufficient to clear out many of the targets U.S. forces were engaging.  Indeed, one intelligence community source described one incident where terrorists crawled out of a structure where conventional Hellfires had failed to kill their intended targets during an operation in Afghanistan.