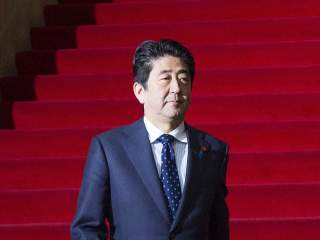 Starting in early 2013, Japan’s Foreign policy turned resurgent with an eye on China. After years of dormant foreign policy, Japan under Prime Minister Shinzō Abe has moved with vigor to secure its international and security interests, resolving the wartime sexual slavery issue with South Korea, securing a strategic partnership with India and opening up Japan’s defense industry after years of a self-imposed ban. This is done with a focus on China’s rise and its implications for the regional security architecture. Abe sees China as a revisionist power and is preparing for a future in which Japan has to contend with China as the main geopolitical force in the Asia-Pacific. He has concentrated his national and international policies on Japan’s changing national security objectives, with both a national and an international perspective regarding its foreign policy and security objectives.

Abe’s biggest opponent in the alteration of the pacifist constitution and revamped military posture are his own citizens. After the brutal experience of WWII, the Japanese have long been content to remain a dormant power under the safeguards of the U.S. security alliance. The Japan-U.S. alliance has stood the test of the time, but the principles on which it was signed are now antiquated. Japan faces a changing and potentially aggressive neighborhood in the form of North Korea and its nuclear ambitions, followed by China's rising power projections in recent years. Abe revised Article 9 of the constitution, which addresses renouncing war as a means to settle international disputes. He felt that the article was demeaning to the citizens of Japan, and hence wanted Japan to realign itself as an equal power, alongside the United States, based on its economy as well as military strength.

Japan-China relations have been fraught since WWII, with each nation invoking wartime rituals to remind each other of the horrors committed in the past. In his remorseful speech last year, Shinzō Abe apologized for the crimes Japan committed during WWII, but argued that it does not mean future generations Japanese have to keep apologizing for the same mistakes, ignoring its evolving security environment. The Japan-China rivalry goes back millennia, and though they share a highly profitable economic relationship they are not likely to become friends anytime soon.

China’s military reform and modernization are what spurred Abe into action. He realized the current security needs of the country cannot be met under a 1950s pacifist constitution, especially Article 9. Starting in 1990, China began a rapid modernization of its military forces with a particular focus on its navy. China’s forays into what Japan considers its territorial waters in the East China Sea and its aggressive action in South China Sea sounded alarm bells in Tokyo, and Abe feared that a rising China would become a more aggressive China and concerned the international community would move toward appeasement.

Shinzō Abe, in his first term as prime minister spoke of an Asia Security Diamond to counter the threat of China in the Asia-Pacific. Though not yet formalized, this initiative continues to gain traction among the proposed member-states. The Security Diamond would include Australia, India, the United States and Japan.

India is an important piece of Abe’s national security puzzle. India holds a key to resisting China’s rise, both militarily and economically. As China’s economy slows, one may expect the Chinese to create disturbances along the Indian border so as to divert attention from pressing issues at home. India has showed great restraint in its military posture with regards to Chinese aggressiveness, in part, because it knows the sort of negative impact a different approach would have on its economy.  Investing in India is not only an economic choice for Japan, but also a strategic one. It is investing in its future as a rising power, and is projected to invest over 10 billion dollars in India over the course of the next five years. Many in Japan, frowned upon the Indo-Japan nuclear deal, including members of both the main political parties, but it was India’s potential which Abe wanted to tap into for Japan’s security interests. It remains to be seen whether India can utilize all this largess to truly build itself as economic superpower.

Abe is also improving ties with Russia, mainly for the energy potential the relationship possesses. He is also concentrated on Africa and Central Asia, two areas where China has a large advantage. Additionally, defense relations with ASEAN Countries are on an upswing, mainly due to increased Chinese assertiveness in the South China Sea. Shinzō Abe hopes to build an alliance out of these countries to secure Japan’s security and energy demands, the latter of which it is heavily dependent on others for.

Shinzō Abe’s foreign policy is different from many of his predecessors. He is an out-and-out reformer, both on the international stage and domestically, and his domestic economic success fuels his diplomacy. And in this diplomacy, he has shaken Japan out of a self-imposed security apathy and plotted a more pragmatic national course. Under Abe, Japan is working to make itself ready to take its role in global power politics more seriously and to create a meaningful impact promoting world peace and prosperity.

Piyush Singh is Junior Research Associate at Takshashila Institution, a strategic affairs think tank in India. This article originally appeared in the Bridge.