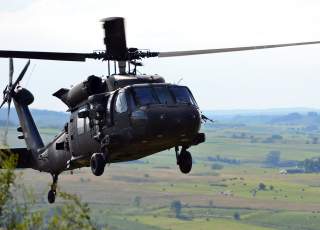 This is why the Army has been spending billions on technologies for virtually every aircraft system: airframe, engines, flight controls, avionics, sensors and weapons. Many of these are part of the Army-led, multi-service Future Vertical Lift (FVL) program, the ultimate goal of which is to replace most of the U.S. military’s fleet of helicopters beginning in the 2030s. The Army has identified FVL as one of its highest modernization priorities.

The FVL program is focused initially on developing a new scout helicopter as well as replacements for the Sikorsky UH-60 Blackhawk and the Boeing AH-64 Apache. Ultimately, the plan is to also develop a heavy lift helicopter and a super-size platform with a payload capacity equivalent to that of existing fixed-wing tactical aircraft such as the Lockheed C-130 Hercules and Airbus A400M Atlas.

In order to ensure that FVL can achieve its ambitious goals, the Army began the Joint Multi-Role Rotorcraft Technology Demonstrator (JMR TD) program in 2004. JMR’s primary objective is to develop and test advanced rotorcraft designs that can achieve a revolutionary leap in capabilities. In addition, JMR seeks to develop a common digital backbone and open architecture that will allow new systems, components and weapons to be rapidly integrated.

The Army selected designs by two teams to build and fly JMR demonstrators. Bell Helicopter is offering the V-280 Valor, a third-generation tilt-rotor platform. The V-280 conducted its first successful test flight this past December. A Sikorsky-Boeing team will soon begin flight tests of the SB>1 Defiant, a revolutionary design with two coaxial rotors on top and a pusher propeller in back. The current plan is to begin production of a new aerial platform around 2030, although there is growing belief that the current schedule could be substantially accelerated.

Although the FVL has received the lion’s share of media attention, the Army has a second major aviation modernization program underway. This is the Improved Turbine Engine Program (ITEP). ITEP is an Army-led program to develop a new engine for the military’s Blackhawk and Apache fleets, one that is 50 percent more powerful and 25 percent more fuel-efficient at no increase in weight. In addition, the ITEP engine will be designed with ruggedized parts to support operations in austere and stressful environments.

Why is the Army pursuing both the FVL programs for a new generation of rotorcraft and ITEP to put new engines in current helicopters? Put simply, even on an accelerated schedule, it will be decades before the products of the FVL program can replace the more than 2,000 Blackhawks and nearly 1,000 Apaches in the U.S. inventory. Since many U.S. allies also operate Blackhawks and Apaches, there is a long-term global requirement to modernize both platforms.

ITEP is critical to ensure the continued effectiveness of the Blackhawk and Apache fleets. As new technologies are added and additional protective measures deployed, the weight of military helicopters has steadily increased. It is estimated that the Blackhawk has gotten 78 pounds heavier every year since it was first deployed. Also, the U.S. military finds itself operating in more challenging environments and at higher altitudes than existing helicopter engines can readily support. Blackhawk and Apache crews often have had to reduce their loads of personnel, munitions and even fuel to get off the ground.

ITEP is currently in the Technology Maturation and Risk Reduction phase. Two companies, both with extensive experience producing high-performance engines, are competing to be the single provider of the new Blackhawk/Apache power plant. One is GE Aviation. Its design for ITEP, the T901 Turboshaft Engine, is a single spool engine meaning that it consists of a compressor and turbine section connected by a single shaft. GE Aviation believes that this design provides reliability and ease of maintenance.

The other competitor is the Advanced Turbine Engine Company, a joint venture of Honeywell and Pratt & Whitney. Its T900 engine is a dual-spool design with two rotating turbine-compressor assemblies instead of one. A dual-spool engine automatically distributes the load between the two assemblies, allowing real-time adjustments to optimize performance, run cooler and reduce fuel use. As a result, the new engine can be designed with less need to make compromises in key performance requirements such as speed and power. The dual spool approach also tends to result in less wear-and-tear and reduced maintenance costs.

The Department of Defense needs to move forward aggressively with both FVL and ITEP. This means providing sufficient funding to accelerate FVL while also ensuring that ITEP can successfully develop a higher performance engine for legacy Blackhawks and Apaches.