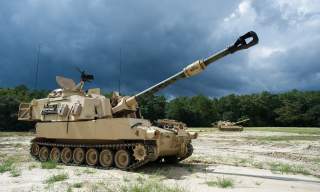 While initially conceived of and developed for the Navy's emerging Rail Gun Weapon, the Pentagon and Army are now firing the Hyper Velocity Projectile from an Army Howitzer in order to potential harness near-term weapons ability, increase the scope, lethality and range ability to accelerate combat deployment of the lethal, high-speed round. The rail gun uses an electromagnetic current to fire a kinetic energy warhead up to 100 miles at speeds greater than 5,000 miles an hour, a speed at least three times as fast as existing weapons.

The new vehicle is built with a more capable, larger chassis, designed as an initial step toward building a next-generation cannon able to outgun existing Russian weapons.

As part of a longer-term plan to leverage the new larger chassis built into the Army’s new M109A7 variant, the Army’s Armament Research, Development and Engineering Center is beginning work on a new cannon able to hit enemies out to 70 kilometers, senior Army developers said.

“Right now we have the 39 calibre cannon we have had since the 80s. We are range limited and the Russians can outgun us and shoot farther,” Maj. Gen. David Bassett, former Program Executive Officer, Ground Combat Systems, said last Fall at the service’s AUSA annual symposium. “If you had not replaced the chassis first, you would never be able to put that larger cannon on there.”

In a modern threat environment, wherein near-peer and smaller-level rivals increasingly possess precision-guided land weapons, longer-range C4ISR technology and drone weapons, increasing range is a ubiquitous emphasis across the Army and other services. Russia’s violations of the INF treaty, new S-500 air defenses, new Armata tanks and fast growing attack drone fleet - all point to a growing need for the US to outrange and outgun potential adversaries.

Furthermore, given the Pentagon’s emphasis upon cross-domain warfare, land weapons are increasingly being developed to attack things like enemy ships, aircraft and ground-based air defenses; naturally, the idea is to pinpoint and destroy enemy targets while remaining at a safer, more protected distance. Deputy Program Executive Officer for Missiles & Space, Brig. Gen. Robert Rasch told Warrior the service is making a decided push to upgrade and develop longer-range weapons as a way to address current threats - and re-adjust following more than 15 years of counterinsurgency.

For example, senior Pentagon leaders have told Warrior Maven that there is some ongoing deliberation about placing mobile land-based artillery - such as a Paladin - in areas of the South China Sea as a credible deterrent against Chinese ships and aircraft.

Bassett described the A7 as a turret ring down revamp, including a new hull along with a new suspension and power-train. The new Howitzer will, among other things, greatly improve speed and mobility compared to the A6.

“In the past, the A6 Paladin was the slowest vehicle in the Army. It needs to leapfrog. We are restoring that mobility so it will be one of the faster vehicles. Howitzers can now outrun 113s,” Bassett said.

Also, as part of maintenance, life-cycle and service extension - all aimed to improve logistics - the new Howitzer is built with an engine and other parts common to the Bradley Fighting Vehicle and emerging Armored Multi-Purpose Vehicle.

Improved on-board power is, similar to other emerging higher-tech platforms, designed to enable the vehicle to quickly accommodate upgrades and new weapons technologies as they may evolve - such as lasers or advanced ammunition.

One senior Army official told Warrior Maven that improved combat connectivity can enable multiple Howitzers to quickly share firing data, as part of a broader effort to expand battlefield networking and operate in more dispersed formations depending upon mission requirements.

The Army is also now working with the Pentagon’s Strategic Capabilities Office to explore additional innovations for the Howitzer platform.

While initially conceived of and developed for the Navy's emerging Rail Gun Weapon, the Pentagon and Army are now firing the Hyper Velocity Projectile from an Army Howitzer in order to potential harness near-term weapons ability, increase the scope, lethality and range ability to accelerate combat deployment of the lethal, high-speed round.

Firing from an Army Howitzer, the hypervelocity projectile can fire at high speeds toward enemy targets to include buildings, force concentrations, weapons systems, drones, aircraft,vehicle bunkers and even incoming enemy missiles and artillery rounds.

"We can defend against an incoming salvo with a bullet. That is very much a focus getting ready for the future," Dr. William Roper, Director of the Pentagon's once-secret Strategic Capabilities Office, told Scout Warrior among a small group of reporters last year.