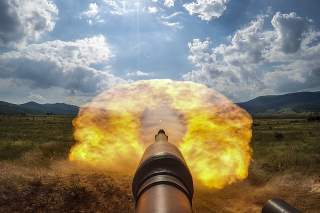 “Our recent conflicts against less sophisticated threats allowed for more open-hatch operations. A commander would be up out of the hatch using his own senses. Operations against a near-peer using artillery, drones and other sophisticated weapons would likely be more closed-hatched operations. This technology will enable him to have more capability in closed-hatched scenarios,” Klager said.

The technologies now being tested, currently in prototype form, are being engineered for the yet-to-be-built future fleet of Army Next Generation Combat Vehicles to surface in coming years. Equipping Army combat vehicles with an ability to conduct mechanized vehicle operations in a massive, full-scale ground war against a near-peer adversary is a fundamental priority in the rationale for creating this technology.

The concept is to use what Army weapons developers call “multi-function” sensors which not only help vehicle crews find and destroy enemy targets at greater distances - but also simultaneously provide 360-degree cameras around the exterior of a vehicle to more quickly locate threats or enemy attacks.

“We are developing algorithms for infrared search and track - we have a passive way to detect and track we would then hand off the target location to a countermeasure system, Klager said.

“We are looking at things like Hostile Fire Detection. You really cannot expect a user to be looking at all these cameras at once. Sensors can look around a 360-degree area all the time. Hostile fire is automatically detected and operators are cued so they have the option to respond, look away or record the event,” Klager added.

Automated sensor technology can, among many things, help identify and track multiple targets at once - such as attacks from enemy drones, artillery or armored vehicles at one time. This kind of scenario, much more likely in a major force-on-force type of mechanized warfare engagement, is precisely the circumstances these emerging sensors are designed to address.

Army helicopter developers have long been exploring various focal plane array technologies to fortify crew protections with hostile fire detection systems. The technology is designed to locate a heat signature coming from an enemy firearm to quickly inform helicopter crews of the location of attacking fire. Ground hostile fire detection, Klager explained, can often be more complicated given the various kinds of obstacles or terrain likely to hinder or challenge sensor technologies.

While the particular range of sensors now in development is, quite naturally, not available for public discussion, Klager did say the long range targeting systems can reach "kilometers."

If vehicle crews are able to view the entire sphere around them, at much longer ranges and with higher resolution, they can remotely operate weapons or transmit targeting data from safer locations inside the vehicle.

“Our recent conflicts against less sophisticated threats allowed for more open-hatch operations. A commander would be up out of the hatch using his own senses. Operations against a near-peer using artillery, drones and other sophisticated weapons would likely be more closed-hatched operations. This technology will enable him to have more capability in closed-hatched scenarios,” Klager said.

Increasingly, computer algorithms are able to process, analyze and disseminate large volumes of ISR data and sensor information without requiring as much human intervention; such a phenomenon, at the heart of fast-emerging artificial intelligence technology, brings enormous implications to combat crews needing to surveill wide swaths of terrain amid combat circumstances.

Army weapons and technology experts are now collecting and analyzing data from recent assessments of prototypes sensors powered by algorithms. More formal testing and evaluation of these technologies is slated to take place in 2019, Klager added.

While the Army is only now in the early stages of concept development for this technology, Maj. Gen. David Bassett, Program Executive Officer, Ground Combat Systems, recently told Scout Warrior that it may indeed evolve into a family of vehicles.

A fleet of similarly engineered vehicles would be designed to both allow for each vehicle to be tailored and distinct, while simultaneously improvement maintenance. logistics and sustainment by using many common parts; the objective would, of course, be to lower long-term life cycle costs and extend the service life of the vehicles. However, of potentially much greater significance, similar engineering, vehicle structures and configurations could definitely expedite upgrades across the fleet as enabled by new technology. This could include new sensors, sights, electronics, force tracking systems and a range of C4ISR technology.

Many Army comments have indicated that the configuration of the new vehicles may resemble hull forms of an Abrams, Mobile Protected Firepower vehicle, Bradley or even elements of a Stryker vehicle. However, it is without question that, whatever NGCV evolves into, it will be built to consistently accommodate the best emerging technologies available.

The new sensors, Klager explained, are being configured with the often-discussed "open architecture" approach, meaning common hardware and software standards are utilized to better facilitate the integration of new technologies as they emerge.

Along these lines, these kinds of computer and AI-enabled combat vehicle sensors provide the technical foundation for an emerging manned-unmanned vehicle teaming technology; now in an early phase of development, manned-unmanned teaming is envisioned as a networked technology wherein manned tanks and other armored vehicles can control or work in tandem with nearby drones to surveil areas, carry ammunition, test enemy defenses or even launch attacks.

“The Chief has stated (Army Chief of Staff Gen. Mark Milley) has said that all future vehicles will be tele-operated. We take those things into account and we’re are going to get some great experimentation in this area,” Bassett said in a recent interview with Warrior. “There are things you can do in a next-gen vehicle which you cannot do in a current vehicle due to physical requirements.”