The Army Wants to Destroy a Tank (without Destroying a City) 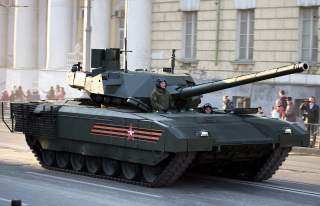 The U.S. Army has a problem. If its dismounted soldiers encounter enemy armored vehicles during a fight in a city, those vehicles will need to be neutralized. The problem is that any explosive powerful enough to destroy an enemy tank—for example, a Russian T-14 Armata tank—will likely devastate the surrounding buildings and their civilian inhabitants.

Therefore, the Army wants a soft-kill weapon that can knock out a tank without obliterating a city block. As the Army research solicitation puts it with understatement, "the sociopolitical ramifications of collateral damage, especially the type of damage that can be inflicted with traditional anti-armor assets have made it increasingly difficult for the dismounted soldier to engage light armor vehicles."

But the Army has another idea: instead of blowing up hostile armored vehicles and the surrounding city block, why not disable them by using, say, some kind of nonlethal microwave weapon?

Interestingly, the Army sees armored vehicles’ Remote Weapons Stations (RWS) as their Achilles’ heel. RWS enable crews of vehicles, such as the U.S. Stryker, to fire external weapons while remaining safely inside the armored hull. In the case of Russia's Armata, the crew operates the turret while staying inside the hull.

"These RWS are often highly instrumented to provide vision, range finding as well as weapon stabilization," the Army explains. "If the instrumentation can be blinded or the stabilization destroyed, they become far less dangerous to the dismounted soldier and the civilian population as a whole. If the entire electronics of the RWS can be disrupted, even basic traversing and firing functions become disabled."

Another soft spot is to target a vehicle's mobility, such as its engine. "It is imperative that these mechanism are not viewed as lethal to bystanders," the Army says.

For that matter, the Army appears to be thinking of groups like ISIS or Hezbollah when it warns of "surface-air missiles, guns and associated radar and tracking equipment that is placed in or near civilian housing, hospitals, schools, mosques or other structures that would have strong negative sociopolitical, ramifications should they be attacked in a normal physical manner."

The Army solicitation doesn't name specific solutions. But it does include an example of what sounds like an electromagnetic anti-tank warhead or mine. "Strong electromagnetic fields, for example, should be able to demonstrate field strengths on the order of 1kV/m (objective) or 50V/m (threshold) as an electric field," the solicitation says. "While lower field strengths will easily damage or destroy sensitive electronics such as radio receivers or GPS/GLONASS (Russia's version of GPS) receivers, the goal is to disable the underlying vehicle and/or its remote weapon station, sensors and the vehicles engine control unit (if present). While contact systems would need lower field strengths, mechanism to mitigate shock hazards need to be addressed."

However, the armor disablement weapon also needs to have enough range—more than a hundred yards—to keep dismounted U.S. soldiers far away enough from heavily armed vehicles. It must also weigh less than five pounds, and disable a vehicle in less than five minutes. In addition, the Army solicitation suggests the weapon should also be capable of targeting buildings.