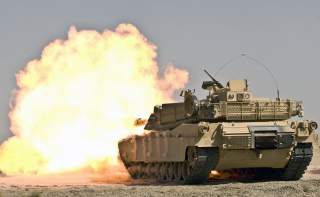 The new vehicles will emerge after the Army first fields its M1A2 SEP v4 upgraded Abrams tank in the 2020s, a more lethal Abrams variant with 3rd Generation Forward Looking Infrared Sensors for greater targeting range and resolution and more lethal Advanced Multi-Purpose, or AMP ammunition combining many rounds into a single 120mm round. '

Another possibility now receiving some attention, Army senior leaders say, is that the NGCV may implement a lightweight 120mm cannon previously developed for one of the Manned-Ground Vehicles developed for the now-cancelled Future Combat Systems program. The vehicle, called the Mounted Combat System (MCS), was built with a two-ton 120mm cannon roughly one-half the weight of the current Abrams cannon.

There is a certain irony built into what was the Future Combat Systems effort, because while it was cancelled in part for not being survivable enough, many of its concepts and technologies continue to both inform and integrate with modern Army platforms.

The MCS was to have had a crew of two, a .50 caliber machine gun, and a 40mm automatic grenade launcher.

The Army’s Combat Vehicle Modernization Strategy specifically mentions the value of adapting the XM360 for future use.

"Next-Generation Large Caliber Cannon Technology. The XM360 next-generation 120mm tank cannon integrated with the AAHS will provide the M1 Abrams a capability to fire the next generation of high-energy and smart-tank ammunition at beyond line-of-sight (LOS) ranges. The XM360 could also incorporate remote control operation technologies to allow its integration on autonomous vehicles and vehicles with reduced crew size. For lighter weight vehicles, recoil limitations are overcome by incorporating the larger caliber rarefaction wave gun technology while providing guided, stabilized LOS, course-corrected LOS, and beyond LOS accuracy."