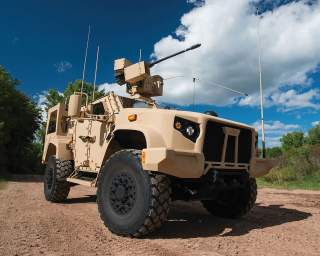 The Army is now vigorously testing its new Joint Light Tactical Vehicle for possible combat missions in 2020 to include sling-loading the vehicle beneath a Chinook helicopter to increase battlefield maneuverability, service officials said.

Current JLTV "test sites" are immersed in preparations of the vehicle for combat as key steps toward fielding the First Unit Equipped by 2019, Army officials told Scout Warrior.

Part of the ongoing testing is aimed at finalizing preparations to air-transport the vehicle behind enemy lines if need be; the JLTV is configured to travel with a CH-47 Chinook cargo helicopter, C-130 fixed wing aircraft or CH-53.

The ongoing testing process is designed to ensure weapons, sensors and other key technologies are properly developed and integrated onto the next-gen combat vehicle.

Having the new vehicle able to transport beneath a cargo helicopter is essential to the Army's Mounted Vertical Maneuver concept of operations aimed at allowing combat assets to change positions in mountainous or difficult terrain where ground passage is not possible. This kind of battlefield technology could be essential in both counterinsurgency operations such as those in Afghanistan - or major mechanized force on force combat in areas where combat environment challenge ground transport. While the JLTV is, of course, engineered for off-road travel, Mounted Vehicle Maneuver also brings the advantage of avoiding or moving through higher-threat areas; part of the concept of MTM includes an operational ability to transport infantry, supplies and weapons behind enemy lines, Army officials explain.

The Army's new Joint Light Tactical Vehicle is a new fast-moving armored vehicle engineered to take bullets, drive over roadside bombs and withstand major enemy attacks; the vehicle was conceived and engineered as a high-tech, more survivable replacement for large portions of its fleet of Humvees.

As evidence of this approach, Lt. Gen. Michael Williamson, former Military Deputy to the Assistant Secretary of the Army, Acquisition, Logistics & Technology, said the multi-year developmental effort of the new Humvee replacement has been focused on engineering a vehicle able to help the Army win wars against a large, near-peer adversary.

In a special interview with Scout Warrior, Williamson pointed to some of the attributes of the Army’s new Joint Light Tactical Vehicle, or JLTV, as a platform well-engineered for large-scale mechanized warfare. Communications technologies, sensors, computers and extra add-on armor protection are, by design, some of the attributes intended to allow the vehicle to network the battlefield and safely deliver Soldiers to a wide-range of large-scale combat engagements.

Some of these preparations involve the potential "up-gunning" of the vehicle with a more lethal 30mm chain gun such as the one currently on the Apache attack helicopter.

A total of about 100 of the JLTV "production vehicles" are being provided at a rate of about 10 per month, officials said. The vehicles are performing some of this maneuverability and automotive testing at Yuma Proving Ground, Arizona, and other sites around the country.

In addition to testing at Yuma, the vehicles are in the process of undergoing testing for cyber integration of command, control, communications and intelligence at the Electronics Proving Ground on Fort Huachuca, Arizona, an Army statement said.

The vehicles will also be tested for automotive performance at Aberdeen Proving Ground, Maryland and the Cold Regions Test Center on Fort Greely, Alaska.

"It's on schedule," Scott Davis, program executive officer for combat support and combat service support, said in an article last year from Army.mil. "It's doing everything we ever expected it to. It's just incredible."

Oshkosh, based in the Wisconsin city of the same name, last won a $6.7 billion Army contract to begin to produce about 17,000 of the light-duty JLTVs for the Army and Marine Corps in 2015.

The services plan to buy nearly 55,000 of the vehicles, including 49,100 for the Army and 5,500 for the Corps, to replace about a third of the Humvee fleets at an overall estimated cost of more than $24 billion, according to Army officials.

Another key aspect of the Army’s future strategy is called Wide Area Security, an approached grounded in the recognition that large-scale mechanized forces will likely need to operate and maneuver across dispersed populated areas as well as much wider swaths of terrain then has been the case in recent years. Having a dispersed force, fortified with long range sensors, armor protection, precision weapons and networking technologies, will strengthen the Army’s offensive approach and make its forces a more difficult, less aggregated target for enemies. This strategic emphasis also incorporates the need for combat forces to operate within and among populations as it seek to identify and eliminate enemies.