The Battle For Iraq Doesn’t End With Mosul—Or ISIS 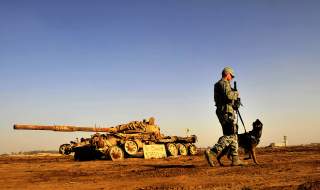 As the battle of Mosul reaches its end, President Trump must decide how to proceed in Iraq. Both the U.S. and Iraqi governments’ rhetoric indicate American troops will withdraw after Mosul has been recaptured. However, that would leave the country vulnerable to Iranian influence. U.S troops should remain in Iraq to secure its territory and government from external threats.

Iran has tried to increase its influence in Iraq since the withdrawal of U.S. troops in 2011. Tehran has extended its reach through Shi’a militias loyal to the Supreme Leader of Iran, Ayatollah Khamenei. These militias have fought alongside Iraqi security forces and Kurdish troops against ISIS to claim territory, not help civilians, and many of them have political wings that seek to align Iraq’s government with Iran’s political and religious structure.

Since 2016, the U.S. has invested over $10 billion and an additional $4.83 billion in the fiscal year 2017 budget to combat ISIS. Currently, there are more than 5,000 U.S. troops and 3,500 coalition advisers to train 65,000 Iraqi soldiers, police, Kurdish troops, and Sunni tribal fighters. The U.S. should continue to support the Iraqi government as it rebuilds. This will help regional partners and the U.S. protect their interests. If the U.S. withdraws, Baghdad may become a puppet of Tehran, making the rest of the region susceptible to Iranian control.

Iran’s funding and logistical support of Iraqi Shi’a militias commonly referred to as the “Popular Mobilization” has aided in the effort to defeat ISIS. However, the Popular Mobilization’s involvement has also led to increased sectarian violence in recaptured areas. In addition, it has delegitimized Iraqi Prime Minister Haider al-Abadi’s sovereignty over the security forces. These militants refuse to take orders from the Iraqi government, and only respond to directions given by Iran’s Islamic Revolutionary Guard Corps.

The U.S. withdrawal of troops from Iraq would be an invitation for Iran to create a base of control to threaten U.S. partners in the region. Currently, Iraqi security forces lack the manpower and resources to secure recaptured territory. Troops are centered in Mosul, leaving the rest of the country vulnerable and unprotected. This not only makes Iraq vulnerable to an ISIS resurgence, but also allows the Shi’a militants free reign over unfortified areas. Iran could take control of recaptured areas through its militias and implement its own rule of law on the inhabitants. Fighting between the Iraqi security forces and the militants would likely cause a drastic surge in sectarian violence, risking civilian lives and worsening the refugee crisis.

A number of groups in Iraq, including from the prime minister’s party, support a closer relationship with Tehran. Some powerful Shi’a political parties receive funding and support from Iran and aim to bring the two countries closer together. They are seeking a leader who will distance the country from U.S. influence. One such individual is Nouri al-Maliki, Iraq’s former prime minister. Maliki insisted on the withdrawal of U.S. troops in the late 2000s and gave top government and military positions to favored Shi’ites, denying rights and representation to other communities in Iraq.

Without U.S. support, the Iraqi government will lose the limited control and legitimacy it has, placing U.S. security and economic interests in jeopardy. A pro-Iran leader in Iraq would hurt U.S. efforts to combat terrorism in the region and strain its economic relationship with Iraq. Much like Iran is able to threaten Israel via its proxy, Hezbollah, in Lebanon, establishing a hold over Iraq would aid its wars in Yemen and Syria against U.S. partners like Saudi Arabia, and further destabilize the region.

During the presidential campaign, Trump repeatedly stated his commitment to combatting Iran’s influence in the Middle East. In an interview with the Washington Post, then-candidate Trump remarked, “Iran is taking over Iraq as sure as you’re sitting there.” In a campaign speech to the American Israel Public Affairs Committee last March, Trump stated “Iran is a problem in Iraq, a problem in Syria, a problem in Lebanon, a problem in Yemen and will be a very, very major problem for Saudi Arabia.” U.S. policy needs to reflect the accuracy of Trump’s assessment.

The Trump Administration must renew its presence in Iraq to prevent a resurgence of conflict and protect the country from Iranian influence. Two programs provide funding for the U.S. to advise and assist in Iraq and Syria: the Iraq Train and Equip program and the Counter ISIL fund. Congress needs to renew these programs in 2018 to fund the security forces. President Trump should also encourage other members of the Counter-ISIS coalition to commit more funding and logistical support for security forces.

The administration should also increase funding for the Air Force’s F-15 and F-16 fighter jet programs, which have been highly effective in targeting ISIS. If President Trump is to follow through in his pledge to “stand up to Iran's aggressive push to destabilize and dominate the region,” he must commit to securing territories and the U.S. relationship with Iraq.

Iraq needs U.S. assistance to stabilize its government and fortify its territory. According to Special Envoy Brett McGurk, “stabilizing areas after [ISIS] can be even more important than clearing areas from [ISIS].” Many displaced citizens returning home to Mosul and other recaptured areas have no faith in the government’s ability to protect them. The Iraqi government now needs to win back the trust of its people. The U.S. must encourage open and continuous dialogue among Iraq’s various communities to gain the people’s trust and strengthen the political system, making it strong enough to withstand Tehran’s control.

There is still potential for Iraq to become an inclusive democracy in the post-ISIS era. The U.S. must continue to advise and assist security forces, support the current Iraqi administration, and sustain a cooperative relationship with Iraq to secure its own regional interests and ensure that Iraq does not fall under the control of Iran.