The Big U.S.-China Summit: What Will Happen? 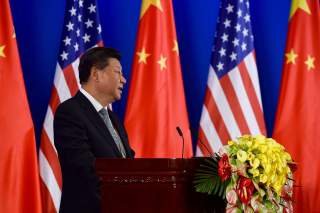 The timing for a meeting between US President Donald Trump and Chinese President Xi Jinping this week is just about right. This month, Trump will have been in office for a full one hundred days. In March, China convened its National People’s Congress meetings, an occasion for leaders at various levels of government to harmonize approaches to governing China for the remainder of the year. In both countries expectations for the two leaders to prioritize substance over formality are well justified. Two days are reserved for the occasion, a clear indication of commitment to achieving their respective goals.

By the time of the meeting, the Trump administration will have sufficiently demonstrated that its China policy direction is one of stabilization. Secretary of State Rex Tillerson, on his maiden trip to Beijing in early March surprised observers — both Chinese and American — by repeating Chinese talking points on conducting the bilateral relationship. On Taiwan, the ‘One China’ policy stays. On issues of finance and trade, Trump has proven amenable, contrary to repeated rhetoric during his presidential campaign.

But the ecology surrounding the relationship between Beijing and Washington is still fragile. The past warns against predicting breakthroughs from the Florida summit. The number of times Xi met with Obama surpassed that of all their predecessors combined since 1971. While there is no evidence to conclude that bilateral ties worsened from those high-level meetings, there is still room for the relationship between China and the United States to improve.

This time round, ‘get tough on China’ is more the norm than the exception among US foreign policy protagonists. Many American pundits blame the Obama administration for having failed to ‘stand up to China’ on just about every issue area from trade and cyber security to North Korea and the South China Sea. Never mind the contrast between Obama’s declarations that ‘prosperity without freedom is just another form of poverty’ in philosophizing a strategic ‘pivot to Asia’, and Xi wondering why foreigners view China as a threat when his country no longer exports ideology or poverty.

Trump is therefore challenged to prove that the United States can, after all, stand up to China. Another group of Americans encourages Trump to live up to his own tweets about China. So far Trump and his team have chosen to resist the pressure.

The Xi–Trump meeting in Florida would be wise to address three issues to get the relationship started on the right footing. First, China needs to be pragmatic in dealing with US influence in Asia. The allies and partners of the United States in Asia — China’s neighbours as well — demand explicit and repeated assurance of US staying power. While the United States willingly chooses to stay in Asia, the widely accepted view that there will be a trade-off between US and Chinese influence over the future of the region sets off complicated trilateral geopolitical reactions. Both Beijing and Washington are constantly tested to prove themselves reliable and amicable.

For China, it would be best advised to drop its past attempts at winning support from the United States for a broad framing of the bilateral relationship between the two countries. The Obama administration’s shunning of the ‘new model of major power relations’ rhetoric serves as a useful reminder that a new try on the Trump administration is unlikely to be productive.

Second, China’s wish for a stable trade and investment relationship with the United States will be easier to meet if its public diplomacy can empathise with those Americans who feel left behind by the forces of globalisation. This can begin by acknowledging that the history of globalisation has been one of transfer of wealth from the rich to the poor countries of the world. At the same time, though, the delivery of lower-cost consumer products from emerging economies has helped lift the welfare of needy consumers in societies like the United States.

Finally, at the Florida summit Trump can ill afford to be seen as soft on China by protagonists in the United States and its Asian allies and partners. At this meeting, the Chinese side should echo Trump by noting that the smooth development of ties between the United States and its Asian allies is positive for China. Trump was wise to have made similar comments in front of the White House press when receiving Japanese Prime Minister Shinzo Abe earlier in the year.

The ballast undergirding the present-day relationship between China and the United States is, ironically, that few options were left untested over the past century. Dearth of determination, on both sides, is not a question. The space for wild swings, available to either side, is limited. For the two countries then — and the wider Asia Pacific region — an un-eventful meet-up is going to be a successful one.