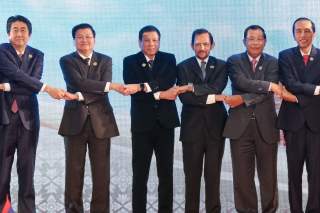 In Asia’s slow-motion power shift, the Philippines has just lurched towards China’s orbit. Now to work out a sense of the import and meaning of the shift.

President Rodrigo Duterte goes to Beijing to declare his ‘separation’ from the U.S., and that he’s “realigned myself in your [China’s] ideological flow.” The zero sum call is that China wins and the U.S. loses. What, though, does this sum add up to? The scale of win and loss is in flux with a hint of farce. Duterte serves up serious stuff with scatologic sauce.

Duterte heads home from Beijing where the finessing starts: he’s not breaking off relations with the U.S., merely seeking a more independent foreign policy. And then the President hops on the plane and heads to Japan, announcing: “The alliances are alive. There should be no worry about changes of alliances.” Initial commentary on Duterte’s separation and realigned language predicted disaster for the U.S., putting the pivot into a death spiral. Far too big a call, I suggest, and far too fast. Rather than the U.S., the big potential loser in prospect is ASEAN.

Consider the state of the race at this early stage:

- Duterte is out in front doing well, even though he’s zooming all over the track. He’s quickly changed and greatly improved the terms of the bilateral game with China. Plus, he’s having huge Trumpian fun zapping the Yanks; arguments with the great ally and former master are always intense and emotional. How could it be otherwise, given the extraordinary intimacy and history between America and the Philippines?

- China has made gains (although it can’t be sure how reliable) and Beijing is going to have to deliver for Duterte to hold its wins.

- The U.S. has taken rhetorical bruises from Duterte but there’s some strategic upside for Washington.

- Trailing the field, facing lots of hurt, is ASEAN, suffering stress to its purpose and cohesion just from what Duterte has done so far.

The U.S. alliance with the Philippines has faced worse and survived. In 1991, the U.S. lost its great naval jewel, Subic Bay. At the time, that really did look like strategic disaster. The end of U.S. access was the complicated product of a restored Philippines democracy, especially the Philippines Senate which wouldn’t endorse a new lease. The role of the broader Filipino polity, not just the president, is worth remembering. If Duterte wants to act on his big shift, he’s going to have to persuade Congress and a lot of other powerful people in Manila.

Repeat the point that the alliance continued, despite losing Subic. The U.S. broadened its regional view, embracing the idea of ‘places not bases’. Others, particularly Singapore, stepped up to offer new places. If Duterte kicks against the pivot, the rest of Southeast Asia can lift the embrace of America.

As previously discussed, the U.S. draws immediate benefit from the way Duterte has lowered the temperature in the South China Sea. One gain that nobody in Washington will state publicly: the U.S. will not take strategic risks for Duterte that it would have had to contemplate for his predecessor, Benigno Aquino. Aquino’s comparison of China with Nazi Germany, warning against appeasement in the South China Sea, forced the U.S. to ponder the danger that its weak ally could draw it into conflict with China. The U.S. might have to fight because of bad moves by Manila.

The U.S. alliance with the Philippines may be described as ‘iron-clad’, but using Washington argot, the alliance is not a self-licking ice-cream—policy choices are made and actions ordered. Already, Duterte has destroyed a lot of alliance capital. The weak ally has torched its leverage. What Washington will risk for the new man in Manila is heading to zero. The U.S. has plenty of options, whatever Duterte does. For ASEAN, though, Duterte has blown up the Association’s whole script. In announcing the embrace of China, Duterte has abandoned a core ASEAN operating principle: to choose is to lose.

ASEAN’s ideal would be decades more of manoeuvring between the U.S. and China with neither of the giants dominating. The ceaseless dance would give ASEAN plenty of diplomatic space and strategic options. ASEAN’s aim is to stay in the middle and drive regional interactions through its own creations (East Asia Summit (EAS), ASEAN Regional Forum, the ASEAN-plus Defense Minister process), while building an ever-more central and influential ASEAN Community. An ASEAN that can’t find a middle path won’t be able to keep itself and institutions such as the EAS at the centre of the multilateral minuets. To become China’s cat’s-paw is to forgo the chance to dance.

In a sophisticated explanation of ASEAN’s aim and method in navigating between China and the US, Singapore’s ambassador-at-large, Bilahari Kausikan, said the Association must embrace ambiguity, avoid invidious choices and seek a predictable and constructive balance: “Not balance in its Cold War sense of being directed against one power or another, but balance conceived of as an omnidirectional state of equilibrium that will enable ASEAN to maintain the best possible relations with all the major powers and thus preserve autonomy. To choose is to compromise autonomy.”

Next year, ASEAN celebrates the 50th anniversary of its founding. And, who is chairing the Association throughout the year of this great milestone? Oh, happy day, ‘tis Rodrigo Duterte.

ASEAN has been quietly grousing that it isn’t getting enough attention or proper priority from the leader of its biggest member, Indonesia’s Joko Widodo. By comparison with Duterte, Widodo looks like the epitome of the ASEAN way. In its 50th year, ASEAN will be led by a maverick whose approach is more ASEAN wayward than ASEAN way.