The Biggest Question for the U.S. Military Today: Technology or Readiness? 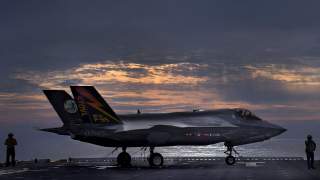 If the initial reports about his first day in office are anything to go by, new US Secretary of Defense James Mattis is living up to what the Washington establishment hopes he will bring to the Trump administration: stability, reassurance and experience. A good example came from The Washington Examiner, which reported that the General had begun establishing a ‘battle-rhythm’ upon entering the Pentagon, sat for four hours of briefings and has even submitted himself to the standard drug tests required of all new Department of Defense employees. But for all of the stability that Mattis looks set to bring to the Pentagon, there are some significant differences between his views and those of his predecessor, Ash Carter, which are likely to have implications for Australia.

On most matters, Mattis is a traditionalist when it comes to American foreign policy and national security—he could have easily served in a Hillary Clinton administration. He believes in the rules-based global order. He’s written that the United States should reinvest in the Bretton Woods institutions and has called for the strengthening of NATO. He’s fiercely loyal to those allies who have supported the US in times of need. During his Senate confirmation hearing, one of the deadpan lines he delivered was simply his belief that ‘nations with allies thrive, nations without allies don’t.’

Appreciating that the US is in a strategic competition with China, he’s argued that the relationship needs to be ‘managed’ by utilising a wide array of tools. On the South China Sea he’s toed the Obama administration’s line, reiterating that ‘the bottom line is…international waters are international waters.’ Where he falls on the ‘rebalance’ to Asia and whether he’ll argue for its continuation in some form is as yet unclear. When questioned during his confirmation hearing he stated that, ‘the US has worldwide responsibilities and certainly the Pacific looms large in that.’ It was a fairly lukewarm answer when compared to his statements on other regions, such as the Middle East.

But through Mattis’ testimony, as well as his previous writings and speeches, a common theme emerges: US diplomacy should be multifaceted and not be based solely on military power, but it should be conducted from a position of strength.

From where the US military draws that strength is the point of his divergence from Ash Carter. One of the marks of Carter’s tenure was an emphasis on innovation and technology as underpinning American conventional deterrence now and into the future. The Defense Innovation Unit Experimental (DIUx) in Silicon Valley, the Defense Innovation Advisory Board, and broadly, the Third Offset Strategy, were all hallmarks of Carter’s drive to infuse technological innovation into upholding American conventional deterrence.

Mattis has signalled a different approach. One of the more consistent arguments the General has made since retiring from the military in 2013 has been that the lack of combat readiness of US military forces is detrimental to American conventional deterrence. Poor military readiness—through a low level of consistent training and tempo of operations, poor upkeep of military equipment and disorganization—in the General’s view has risked the American military becoming a ‘hollow force.’ Mattis made it clear during his opening testimony at the US Senate that his priorities as Secretary of Defense will be, in order, to ‘strengthen military readiness, strengthen our alliances, and bring business reforms to the Department of Defense.’

Looking back, this priority on combat readiness likely stems from the lessons the General drew from the 2006 Lebanon War, displayed in his 2008 memo Guidance for Effects Based Operations. Broadly, Mattis argued that the joint force at the time was too reliant on certain technologies, precision-warfare and centralized leadership. Instead, ‘the joint force must act in uncertainty and thrive in chaos, sensing opportunity therein and not retreating into a need for more information.’ He highlighted the Israeli Defense Forces’ lessons from the war, saying the concept ‘discounts the human dimensions of war,’ promotes centralization and leads to micromanagement from headquarters’ and ‘assumes a level of unachievable predictability.’ The 2008 memo is a good indication of how the new Secretary of Defense thinks about the nature of war and what makes a lethal fighting force. Deterrence is guaranteed by highly effective and trained combat forces and their lethality—but not necessarily though complex systems or technological and information dominance.

The focus on innovation and technological superiority will remain a priority at DoD—particularly if Obama-era Deputy Defense Secretary Bob Work remains—but Mattis’ repeated statements on how battlefield readiness should be the focus of all planning decisions may signal a shift in budget priorities. For Australia, that could eventually have implications for US training and deployments. Canberra may expect to see requests for a higher rate of US rotations through Australian facilities, more joint-military exercises and more high-end and diversified military assets, like the recently announced rotation of F-22s and the next deployment of Marine assets to Darwin. Much of that depends on whether Mattis is able to carve out his own sphere of influence within the Trump administration. If he does, allies like Australia could be expected to do more, but within a framework committed to engaging with and upholding a rules-based order.