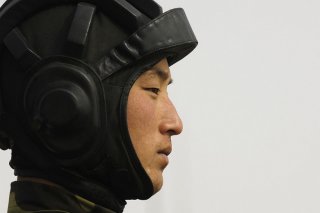 China’s main geopolitical enemy isn’t Japan. It isn’t Russia. It isn’t even the United States. In lockstep with the rising tensions in the South China Sea, Communist Party leader Xi Jinping has begun an internal war against the “flies and tigers” of military corruption, aware of the fact that no matter how many guns you own, their effectiveness comes from the people and institutions who wield them.

Yet his recent expulsion of two high ranking officials from the Communist party for graft—Zhang Youren, the former chairman of Anhui Military Industry Group, and Xu Caihou, former vice chairman of the Central Military Commission—highlights the deep, institutional hurdles China’s military establishment still must overcome before they can ever truly flex their military might abroad. As China’s military budget swells and threats emanate in the South and East China Seas, Beijing must begin to seriously question what the military would rather defend: their pockets or their homeland.

According to military historians Millett, Murray, and Watman, “Victory is not a characteristic of an organization but rather a result of organizational activity.” Military effectiveness requires regular dialogue and coordination across the political, strategic, operational, and tactical levels of military activity, or put differently, a strong civil-military structure. A weak link in it can strip a government of its legitimacy, and lower morale and leadership to such an extent that no one is left to fight for their country. Peter Feaver described the civil-military challenge as “how to reconcile a military strong enough to do anything the civilians ask them to do with a military subordinate enough to do only what civilians authorize them to do.” Thus, institutions in which political loyalties and bribes rather than education and experience becomes the basis for promotions inevitably exhibit strategic inefficiencies and in the most dire of cases, war losses.

Nowhere else has corruption become as much a national security priority as in China. General Liu Yuan, political commissar of the PLA’s General Logistics Department, which services the 2.3-million-strong PLA, delivered a fiery speech before his department in 2012 criticizing the unchecked mentality of "malignant individualism” that beset the PLA. Officers openly sold their services at “clearly marked prices,” followed orders only suiting their professional interests, purchased promotions, and blackmailed CCP leaders. While actual numbers are unattainable, corruption has become so profuse that some experts consider it a conservative estimate to assume that even 10 percent of procurement contracts and administrative spending—accounting for 0.65% of China’s $8.27 trillion GDP—are used as kickbacks or bribes, if not simply stolen!

No wonder that corruption has come at a serious toll to the CCP’s legitimacy and national security interests. Joseph Basco explains:

The economic fairness pillar of domestic legitimacy has been crumbling in recent decades. The nation’s remarkable growth in wealth, combined with the CCP’s ongoing monopoly on power and opaque governance, has spawned massive corruption at all levels of political and military authority. Every year, China experiences almost 200,000 public protests against land seizures, environmental degradation, bribery, and other official misconduct.

Corruption at home has created a dangerous disjuncture between the political and military levels that is sure to constrain its international aspirations. This loss of legitimacy underpins the widespread warning now seen across Chinese news sites: “A corrupt army has no ability to fight and cannot win wars.”

As of yet, indictments have proved ineffective at curbing corruption. In 1998, Chinese politician Zhu Rongji complained before the PLA of backroom dealings and smuggling in the General Political Department’s Tiancheng Group, despite a ban on the PLA from engaging in commercial enterprises: “Every time our customs officials tried to snare these bastards, some powerful military person appeared to speak on their behalf.” A year later the Yuanhua Group was found guilty of using military connections, including top officials as high as the Politburo Standing Committee member Jia Qinglin and then director of the Intelligence Department of the General Staff Major General Ji Shengde to evade $6.3 billion in taxes—money that could have been invested in research and development. Still, by 2005, the military raided the lavish home of Deputy Director of the PLA’s General Logistics Department, Gu Junshan under charges of extortion, bribery, and misuse of state funds for professional gain, finding a pure golden bust of Chairman Mao and hundreds of boxes of high-end Chinese liquor.

The fact is that despite Xi’s “progress” against corruption, graft is sure to persist in a military establishment obscured from public scrutiny and beholden to a single-party elite rapt in cronyism and money. In a state where the degree of corruption rises with the military hierarchy, as Teng Biao showed, the probability of catching the “tigers” of corruption and the severity of their punishment is slight. Without full-scale civil-military reform, every inch of economic growth will further dislocate China’s military from its homeland and constrain their ability to stage an effectively military presence abroad.

Thus, while Xi’s ongoing campaign against corruption strikes fear into the hearts of some, particularly officials worried about a more effective Chinese military, it should sound some hope for seeking peaceful resolutions with Beijing.

On the one hand, greater civilian participation and transparency in the military would send a positive signal to the U.S. and Japan about their intentions to democratize, in addition to opening channels for mutual understanding, information sharing, and dialogue. On the other hand, further indictments without reforming an institution permissive of corruption will undoubtedly cause China’s military to atrophy over time, if not implode from domestic protest. That’s a scenario that could prove dangerous not only for Beijing, but also the rest of the globe.