The Birth of Kurdistan? Not So Fast... 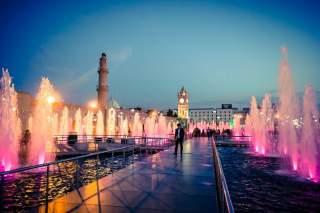 As Iraq slides into the abyss, the Kurds stand to be big winners. On Thursday Kurdish forces, known as peshmerga, entered Kirkuk as the Iraqi military melted away in the face of Islamic State of Iraq and Syria (ISIS) advances, paving the way for a decades long dream to control the oil rich city. In other disputed areas with the central government, a rough line that runs from Khanaqin to Mosul, Kurds filled the security gap. Within days the Kurds have solidified their areas of control south of the official borders of the Kurdistan region.

The disputed areas, especially Kirkuk, have long been a potential flashpoint between Iraq and Kurdistan. Several times the two sides have faced off, only to back down after negotiations. Now with the Iraqi Army in disarray and the central government weak and distracted, its difficult to envision the Kurds giving up their gains. This in turn opens up the prospect for future conflict with Baghdad and Kurdish leverage to extract demands from the central government over outstanding differences.

Stable and relatively prosperous, the autonomous Kurdistan region has used the past decade wisely--to build up the institutions of a quasi-state, complete with its own ministries that function independently of Baghdad. This has led to tensions with the central government, particularly over Kurdistan's oil policy.

Indeed, last month Kurdistan began exporting and marketing independent of the central government the first shipment of Kurdish oil through Turkey. Baghdad responded by taking legal action against Turkey and threatening potential buyers of Kurdish oil, upping the ante in a long running game of political brinksmanship between Baghdad and Erbil.

The Kurd's advances and the collapse of Iraqi state authority have created expectations that this historical moment will provide the Kurds with an opportunity to declare independence. The inability or lack of desire by Iraqi Prime Minister Nouri al-Maliki to meet Sunni demands and instead pursue a sectarian agenda has only encouraged Kurdish aspirations for independence. And as Baghdad mobilizes Shia militias against ISIS and former Baathist regime elements, the Shia-Sunni sectarian bloodletting that will follow will only exacerbate Kurdish desires for independence. As former Kurdistan Regional Government prime minister Barham Salih once said, ''The Kurds will not be the ones who divide Iraq, it will be the Shiite-Sunni power struggle.''

The offıcial Kurdish position has been that they don't seek independence, only their constitutional rights, including a long delayed referendum on Kirkuk's status and the disputed territories. However, as Iraq frays at the center the prospect long-term instability and a Shia south, Sunni center, and independent Kurdistan are rising.

However, it is wishful thinking to predict the Kurds will move towards independence, or that they are ready. Neither a fragmented Iraq, an Islamist controlled border with the KRG, nor a flood of refugees are in Kurdistan's interests. Kurdish institutions are still embryonic, divided between the two dominant parties, the Kurdistan Democratic Party (KDP) of KRG President Masoud Barzani and Iraqi president Jalal Talabani's Patriotic Union of Kurdistan (PUK), each of which control their own peshmerga forces. Rather than a united Kurdistan, a more accurate assessment is that of a KDPstan and PUKstan. Intra-Kurdish rivarly and particularist interests, therefore, militate against independence.

Breaking with Baghdad will also entail huge financial costs to the KRG, which receives—albeit irregularly – a substantial cut from Iraq's oil rich budget. The limits of Kurdistan's financial independence were apparent early this year, when the central government stopped payments to the KRG over oil disputes. In a region where nearly 75 percent of the workforce relies on the government for a paycheck, public sector employees weren't paid for months resulting in widespread public dissatisfaction. As banks experienced a liquidity crisis, the Kurdish owner of Asiacell, the country's largest telecom, was asked to provide $130 million to prevent a financial collapse. At current Kurdistan oil production levels, the KRG will be financially unviable. Assuming they can extract and market oil, at best the Kurds could hope to be financially independent by 2017.

Then there are Kurdistan's neighbours, Turkey and Iran, which have inordinate influence on Kurdish politics. Facing its own Kurdish problem at home, Turkey would be hostile to Kurdish independence, reversing a trend since 2008 which saw a deepening of relations between Ankara and Erbil. While Turkey has developed strong political and economic ties with Kurdistan – including oil deals, 1,200 Turkish firms in Kurdistan, and $8 billion in trade – part of this strategy was to integrate the KRG with Turkey and curb-cum-control Kurdistan's ambitions for independence. On the other hand, Iran has no interest in seeing the Shia government in Baghdad fall, nor the emergence of a Sunni insurgency on its border. Iran has influence over Sulaymaniyah province and the dominant political parties, Gorran and PUK, while Turkey purview extends over Erbil and Dohuk, the KDP's zone of control. Ultimately, sovereignty comes from outside recognition and neither of Kurdistan's neighbours, nor the US with its ''one Iraq'' policy and international powers will recognize a Kurdish state.

Despite trends militating against Kurdish independence, the recent chaos in Iraq has worked towards the Kurd's advantage. Even if the Sunni Islamist gains are reversed, the Kurds will still maintain the newly captured territory and will want nothing to do with a Sunni-Shia civil war. Kurdistan will only fight ISIS, and possibly the central government, to maintain territory it has captured in the past week. If Baghdad gets back on its feet--probably with Iranian backing--it will ultimately have to compromise on Kurdish demands, especially over oil and payments, if it wants Kurdish support. And in the worse case scenario, the end of Iraq as a state, the Kurds can bide their time, continuing to build institutions until conditions are ripe for independence.

Chase Winter is a journalist based in Sulaimani in the Kurdistan Region of Iraq. He holds a BA in international studies and MA in Middle East studies from the University of Washington.