The Case for Stronger Relations Between Vietnam and America 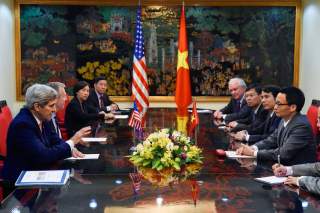 At the invitation of Secretary of State John Kerry, Dinh The Huynh today embarks on a working visit to the United States. Little known beyond Vietnam as he is, Huynh is the Executive Secretary of Secretariat of the Central Committee of the Communist Party of Vietnam (CPV), one of the country's five key leaders. In Hanoi’s power hierarchy, Huynh’s job is a highly contested position often reserved for strong candidates groomed for higher promotion. The fact that his visit came just five months after U.S. President Barack Obama visited Vietnam in May 2016 shows that Hanoi continues to attach great importance to its relations with the United States.

Seventy years ago, in his letter dated February 16, 1946 addressed to U.S. President Harry Truman, President Ho Chi Minh, Vietnam’s Founding Father, expressed his ardent aspiration for two valuable goals, namely independence and full cooperation with the United States. He made it very clear that Vietnam would do its best to make this independence and cooperation profitable to the whole world.

History has its twists and turns. And Ho Chi Minh’s dream did not come true in his lifetime. It took another thirty years for Vietnam to realize the first goal, and nearly 70 years for the second. After a protracted and bitter war, it is unimaginable that Vietnam and the United States have turned from foes to friends. Less than twenty years after the normalization of diplomatic relations in July 1995, the two countries established their Comprehensive Partnership in 2013. In July 2015, history was made when the CPV’s Secretary General Nguyen Phu Trong paid an official visit to the United States at the invitation of President Obama. It was the first time since the end of the Cold War that the President of the United States received a Secretary General of a communist party in the Oval Office.

President Ho Chi Minh was very far-sighted in his strong conviction that full cooperation between Vietnam and the United Stated is in the shared interests of the whole world. If history is any indicator, when Vietnam and the U.S. were hostile to each other, the region was engulfed in turmoil and conflicts. Over the past 20 years, with Vietnam-U.S. relations getting better with each passing day, we have witnessed unprecedented opportunities to realize the region’s huge potential for peace and prosperity. It is remarkable that Vietnam-U.S. trade turnover has increased 187 times, reaching $41.43 billion in 2015, making the U.S. one of Vietnam’s 5 top trading partners. Since 2014, Vietnam has surpassed Thailand to become ASEAN’s top exporter to the United States. Today, over 17,000 Vietnamese students are studying in the U.S., making Vietnam the biggest source of foreign students to America among ASEAN countries. The two countries are working closely together to overcome obstacles in order to put the Fulbright University Vietnam into operation after a controversial tussle over Bob Kerry’s capacity as the University’s board Chairman.

In February 2016, Vietnam and the United States and ten other countries in the Asia-Pacific officially inked the Trans Pacific Partnership (TPP), a new- generation Free Trade Agreement that can help shape the future of the region. Vietnam is very determined to ratify the TPP in the near future. Hanoi hopes that the United Stated for its own interests as well as the shared interests of the region and the world will show leadership in an early ratification of the TPP. Had it not been for political division and unpredictability in the United States, Hanoi would have put forth the TPP ratification when its National Assembly convened for the month-long session from mid-October 2016.

More than any other TPP members, perhaps Hanoi’s top leaders, Dinh The Huynh among them, also share Singaporean Prime Minister Lee Hsien Loong’s insightful remarks when he visited the United States last August: “For America's friends and partners, ratifying the TPP is a litmus test of your credibility and seriousness of purpose.” It is estimated that Vietnam will be the biggest beneficiary of the TPP. But it is no secret that Vietnam joined the TPP for both economic and strategic reasons: Hanoi is one of the strongest supporter of a sustainable strategic engagement by the United States in the Asia-Pacific.

Vibrant trade and people-to-people ties aside, Vietnam has become one of the most important new security partners of the United States. Among ASEAN member states, Vietnam stands out for its mettle and stability both at home and its foreign policy implementation. It is noteworthy that Vietnam played a significant role in inviting the U.S. to join the East Asia Summit when the country assumed the ASEAN Chairmanship in 2010. It also pushed hard for the establishment of ASEAN - U.S. strategic partnership in November 2015.

Currently Hanoi and Washington are working together with other security partners to ensure regional peace and stability as well as maritime security and freedom of navigation in the South China Sea, which is necessary for continued prosperity in the Asia-Pacific and beyond.The two countries are also sharing experiences as troop contributors to the UN peacekeeping operations. Since it first embarked on UNPKO in 2014, Vietnam has now dispatched peacekeepers to UN Missions in South Sudan and the Central African Republic.

After the 12th national Congress of the CPV, Vietnam remains strongly committed to its foreign policy of independence, multidir-ectionalization of external relations and proactive international integration. The 30-year Doi Moi process has lifted millions of people out of poverty and brought about dramatic changes in the country. More than ever, Vietnam seems to be determined to build a wealthy, strong, equal, democratic and advanced country, as its top leaders have emphasized times and again. A strong, stable and prosperous Vietnam is in the interests of the United States. That is why during Secretary General Nguyen Phu Trong’s official visit to the United States in July 2015 and President Obama’s visit to Vietnam in May 2016, Hanoi and Washington have reaffirmed strong commitment to respect each other’s political systems and further deepen the Comprehensive Partnership between the two countries.

Recently, U.S.’s treaty allies in ASEAN such as Thailand and the Philippines have increasingly tilted to China both economically and strategically, especially after the rise of the anti-U.S. populist Duterte in the Philippines. At the same time, traditionally influential players in ASEAN are now either more inward-looking like Indonesia under President Joko Widodo or preoccupied with domestic problems like Malaysia. This has left ASEAN virtually paralyzed, unable to issue a Joint Statement on the July 12 final ruling of the PCA on the Filipino arbitration against China’s excessive claims in the South China Sea. Against this backdrop, Vietnam’s strategic significance features even more prominently in the strategic calculation in the U.S.’s policy towards ASEAN and the Asia-Pacific. It is clear whoever becomes the new occupant of the White House after Barack Obama, Vietnam will retain a considerable place in the America’s Asia–Pacific strategy.

It goes without saying that the South China Sea is the barometer of the U.S.’s primacy in the Asia-Pacific. Given Vietnam’s geo-strategic position, in his well-known book titled “Asia’s Cauldron: The South China Sea and the End of a Stable Pacific”, Robert Kaplan made an insightful observation: “If China can break off Vietnam, they’ve won the South China Sea.” Therefore, the unpeaceful rise of China and the new dynamics in the region have made the strategic interests of Vietnam and the United States increasingly convergent. In order to maintain the rules-based order that it shaped over the past 70 years, the United States can hardly afford to allow China to run roughshod over Vietnam to get its way in this strategic body of water of the world.

For its part, like most countries in the region, Vietnam understands that the future of the Asia-Pacific is inextricably intertwined with a strong and sustainable engagement of the United States. During the long history of relations with China, Vietnam deeply understands that a Sino-centric order was accompanied by nearly twenty invasions by its bigger neighbor from the north. Therefore, Dinh The Huynh’s debut visit to the United States reveals much about Vietnam’s future direction both at home and abroad.