The Chinese Army's Sneaky Ploy to Take Over China's Military 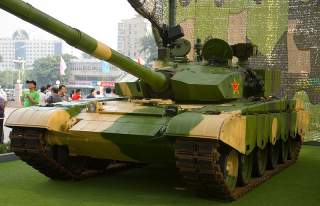 After decades as primarily a ground force with the world’s army (go tell China to never fight a land war in Asia), the Chinese military is reorienting itself toward an air-sea conflict in waters such as the South China Sea. For more than a decade, it has been China’s air and naval forces that have growing in budget and stature, while the army has not.

Yet two China scholars ask a perceptive question: Why is the Chinese army going along with these reforms? As we well know from the U.S. military, no service ever voluntarily cedes power to another. It would be like the U.S. Army telling Congress, “cut our budget and give the Air Force more money.”

The answer, the scholars suggest, may actually be Machiavellian. The Chinese army is going along with the reforms because it actually believes it will gain more power from them.

In an article in Joint Forces Quarterly, Phillip Saunders and John Chen begin their analysis by noting the decline within the People’s Liberation Army—the general name for Chinese military—of the PLA Army (PLAA), the ground force component of the PLA and traditionally the dominant service.

“Most of the 300,000 troops that will be cut from the PLA will come from army ranks. Moreover, the army is widely perceived as the likely loser in current PLA organizational reforms,” Saunders and Chen write. “Elimination of the general departments and establishment of a new army commander and headquarters reduced the army to bureaucratic equality with the other services. The PLAA also lost direct control of space and cyber units, which were transferred to the new Strategic Support Force.”

The army does not control—or has lost control—of assets that would be the cutting edge of Chinese attempts to project beyond its borders. “The army does not have rapid reaction airborne forces or the strategic lift capabilities needed to move forces beyond China’s land borders—paratroopers and strategic airlift assets both belong to the air force,” note the authors. “The PLAA does not operate long-range surface-to-air missiles that can defend Chinese airspace, does not command conventional or nuclear missile forces that can enable power projection or deter nuclear attack, and has now ceded space and command, control, communications, computers, intelligence, surveillance, and reconnaissance missions to the Strategic Support Force."

So why is the army content to take a back seat? Saunders and Chen suggest a few possibilities. One is that the Chinese military was modeled after the Soviet military, where the Red Army didn’t control ballistic missiles, air defense and paratroopers, either. China’s army may also have focused too much on modernizing its forces for conventional land warfare rather than preparing for a new wave of joint operations. And while the PLAA may have been resting on its laurels as the senior service, the navy and air force were busy asserting their independence and priority, and they are not about to cede control to the army.

Yet all of this might just be a smokescreen for a sneaky bureaucratic maneuver worthy of the most devious backroom wheeling and dealing in the Pentagon.

“The military reforms could be interpreted as a way for the PLAA to reassert its strategic relevance and expand its control over other parts of the PLA,” say Saunders and Chen. For example, China’s Central Military Commission Joint Staff Department, responsible for joint operations, is commanded by the army’s former chief of staff, while all five theater commands are commanded by army officers.

“The new joint C2 [command and control] structure gives these army officers full operational command over forces from all services during both war and peacetime,” the authors write. Under the old system, military region commanders didn’t exercise peacetime operational control over navy, air force and strategic missile forces. Now, the navy and air force headquarters no longer have an operational command role. The army is also likely to define the qualifications for joint command positions in a way that favors army officers.

However, while this may be good for the Chinese army, it may not be good for China. The joint operations systems may not turn out to be joint. “The current PLA approach of placing joint C2 mechanisms at the theater command level injects an army commander into the operational chain of command even if the mission does not require it,” Saunders and Chen warn. “An army general heading the Southern Theater Command may not be best qualified to command forces in South China Sea maritime disputes; his presence in the chain of command adds an extra layer that subordinates must navigate to include other services in planning and conducting operations."