The Chinese Military Report You Missed (But Need to Read, Now) 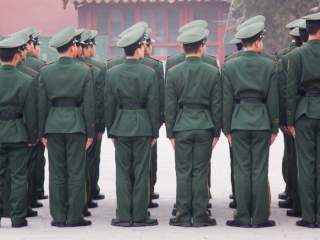 Okay, so coming in at a beefy 631 pages, the U.S.-China Economic and Security Review Commission’s (USCC) annual report might not exactly be a light read. However, for those of us on the hunt for the latest non-classified, open-source material on China’s military there appear to be several important data points worth seeking out.

Truth be told, the entire report is not about Beijing’s mighty military, with the bulk of the report detailing U.S.-China trade relations as well as Beijing’s interactions around the world. However, Chapter 2 is where Chinese military geeks need to pay attention. Below are some of the highlights that I found of most interest:

“China launched three new Type 093 SHANG-class nuclear attack submarines in May, according to Chinese media reports. The new submarines are reportedly the first SHANGs to carry a vertical missile launch system capable of firing the long-range YJ–18 anti-ship cruise missile. The increasing number of Chinese submarines and the growing range of Chinese submarine-launched munitions will greatly complicate the threat environment for U.S. ships operating near China.”

Point #2 - Chinese Diesel Submarines Are About To Get Even More Dangerous:

“Media reports suggest China has built two new fifth-generation J–20 fighters, bringing its J–20 fleet to six aircraft. The two aircraft reportedly conducted their first flights in late 2014. The J–20 could reach initial operational capability in 2017–2018, and China reportedly hopes to build 24 J–20s by 2020. The PLA Air Force views the J–20 as key to improving China’s ability to conduct offensive operations to deny an enemy’s chance to mobilize defensive forces. The J–20’s stealth features and electronic warfare capabilities would degrade the ability of U.S. forces within the first island chain to detect and engage it.”

Point #4 - The Chinese Navy (PLAN) Wants to Sail Further Out To Sea:

“China will purchase S–400 air and missile defense systems from Russia, according to an April 2015 statement from the chief executive officer of Russian arms exporter Rosoboronexport. China signed a contract to purchase the S–400s in 2014. Analysts say the order likely includes four to six units, at a total cost of $3 billion. The S–400 will extend the range of China’s surface-to-air missile force from 300 kilometers (approximately 186 miles) to 400 kilometers (approximately 249 miles)—enough to cover all of Taiwan, the Senkaku Islands in the East China Sea, and parts of the South China Sea—and feature an improved ballistic missile defense capability over China’s existing surface-to-air missile systems. China also is developing its own next-generation surface-to-air missile, the HQ–19, which likely will have capabilities similar to the S–400.”

Point #6 - Beijing Is Becoming Quite the Arms Dealer:

“China overtook Germany to become the third-largest arms exporter worldwide in 2015, according to a Stockholm International Peace Research Institute study. Between the periods 2005–2009 and 2010–2015, China’s exports of major arms rose 143 percent from $3.1 billion to $7.6 billion. China’s arms exports increasingly include advanced weapons and platforms, such as jet fighters and missile corvettes. The surge and growing complexity in China’s arms exports reflect the maturation of China’s domestic defense industry after decades of significant Chinese government investment in defense research and development, as well as China’s efforts to secure foreign military technology through arms transfers and espionage. China is poised to continue growing its arms exports as it increasingly offers low-cost alternatives to advanced platforms formerly available only from the United States and Russia. Moreover, these mounting arms exports will support China’s military modernization program by defraying the costs of some of the country’s investments in its domestic defense industry.”

Point #7 - China Sees U.S. Satellites in Orbit as a Weakness It Could Attack:

“The PLA assesses U.S. satellites are critical to the United States’ ability to sustain combat operations globally. PLA analysis of U.S. military operations states that ‘destroying or capturing satellites and other sensors . . . will deprive an opponent of initiative on the battlefield and [make it difficult] for them to bring their precision-guided weapons into full play.’ In another study, the PLA estimated that the United States developed a comprehensive surveillance system comprising approximately 50 satellites as well as unmanned aerial vehicles and aircraft during its participation in the North Atlantic Treaty Organization campaign in Kosovo. The same study estimates space systems provided 70 percent of U.S. battlefield communications during the campaign, 80 percent of its battlefield surveillance and reconnaissance, and 100 percent of its meteorological data, and did so 24/7 through all weather conditions.”

“According to Mr. Stokes, the Second Artillery’s growth, modernization, and departure from its origins as a solely nuclear force have proceeded and will continue to proceed in phases. Preparation for a Taiwan contingency through the development and deployment of short-range ballistic missiles (SRBMs) with a 600 kilometer (372 mile) range along the Taiwan Strait from the late-1980s to the mid-1990s constituted the first phase. A second phase has been the expansion of SRBM ranges to 1,500–2,000 kilometers (932–1,242 miles) to develop a basic capability to strike longer-range targets on land and moving targets at sea. The next phase, which Mr. Stokes anticipates China could reach by the end of 2015, is an extension of its conventional precision strike capability to a range of 3,000 kilometers (1,864 miles) and beyond. Finally, China could pursue an even greater extension of the Second Artillery’s conventional precision strike capability to 8,000 kilometers (4,971 miles) and eventually a global conventional precision strike capability, which Mr. Stokes estimates could take place by 2020 and 2030, respectively.”

Point #9 - When and How Would China Use Nukes?:

“Another factor that sheds light on how and when China might employ nuclear weapons is its nuclear escalation philosophy—how a state might use nuclear weapons to escalate or deescalate a conflict. Dr. Yeaw testified to the Commission that China views the use of nuclear weapons not ‘‘in a warfighting fashion intended to defeat the adversary on the battlefield,’’ but ‘‘in the high-intensity political management of an escalating and perhaps unsustainable conflict.’’ According to this escalation philosophy, China would punctuate non-nuclear operations with tactical- or theater-level nuclear strikes to seek deescalation on terms favorable to China. Unlike strategic nuclear weapons, which target an adversary’s homeland and population centers, tactical and theater nuclear weapons (also known as nonstrategic nuclear weapons) are designed for missions at shorter ranges, and usually carry lower-yield warheads. Because their use does not invite overwhelming nuclear retaliation in the same way as would strategic nuclear strikes on a country’s homeland, tactical and theater nuclear weapons are considered to be a stronger deterrent and a more credible threat.”

Last Point - How Would China Use All Those Missiles?:

“If deterrence fails, the Second Artillery would likely weaken key enemy targets with network attack and electronic warfare before launching conventional missile strikes. Potential targets for conventional missile strikes, which are outlined in authoritative publications, support this theme. These include C4ISR hubs, missile positions, military transportation and logistical hubs such as ports and airfields, key military facilities, critical infrastructure, and carrier strike groups. These targets are both critical and vulnerable, and would, if destroyed, severely impede the ability of adversary forces to function and communicate smoothly. In a Taiwan scenario, for example, Chinese missile strikes on such targets could suppress Taiwan air defenses as a precursor to PLA Air Force operations over the Taiwan Strait.”

As you can see, the report has a tremendous amount of information for anyone who wants to be in the know on China’s military. My suggestion: read the whole thing—well, at least Chapter 2!