The Continuing Decline of America's Military 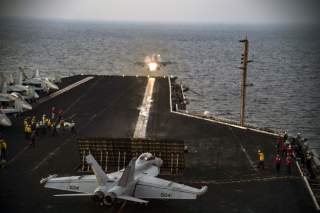 As a new presidential administration prepares to take office, the responsibilities it inherits are daunting. Threats to U.S. interests and security around the globe continue to grow and fester.

At the same time, budget cuts have forced the Department of Defense into unsustainable practices, foregoing longer-term modernization to service the military’s more immediate needs and ongoing operations.

The Heritage Foundation’s third annual Index of U.S. Military Strength, published today, finds that these troubling trends described in the first two editions have only continued. While the military struggles to preserve the status quo, America’s enemies “have not remained static.”

Consider the Democratic People’s Republic of Korea (DPRK). In the past year, the DPRK conducted multiple nuclear tests, including an alleged hydrogen bomb test in January, and a second higher yield test in September.

The DPRK has also continued to develop ballistic missile capabilities to deliver such weapons. During the same time, the “strategic muscles” of the U.S. have atrophied.

In addition to an aging nuclear infrastructure and out-of-date nuclear weapons designs, the Task Force on DOD Nuclear Weapons Management concluded that “the read­iness of forces assigned the nuclear mission has seriously eroded.”

Meanwhile, Russia is developing a new tank, the T-14 “Armata,” which is lighter and faster than the tanks of the U.S. and its allies. A British intelligence report called it “the most revolutionary tank in a generation” and speculates that Russia is adding “six additional armoured vehicles to [its] stable.”

By contrast, the U.S. has delayed or canceled multiple ground combat vehicle programs and, with none currently under development, the future of such capabilities remains uncertain.

While Russia builds up its forces along its border with NATO, America is increasingly weakened by continued reductions in troop levels, having the smallest standing army since 1940. Army procurement was cut 35 percent  between fiscal years 2011 and 2015, and the military as a whole is now smaller than it was before 9/11.

This accelerated troop reduction plan, driven by the Obama administration, has forced military officials to make difficult decisions in strategic operations. For instance, the 4th Brigade Combat Team (BCT) from Alaska was scheduled for deactivation in fiscal year 2016, but due to its strategic location, U.S. Army Chief of Staff Gen. Mark Milley agreed to postpone the BCT’s deactivation.

Even after preserving this BCT, the Army fields only 31 active component BCTs—far fewer than the 50 The Heritage Foundation considers as necessary to protect U.S. interests and deter aggression around the globe. If Congress returns to sequestration in 2018, it will result in continued force reductions and will further threaten America’s global posture.

In the Pacific, China remains a considerable potential threat as it continues to build up a military while advancing provocative territorial claims in the region. These actions threaten to impede freedom of navigation and stability in the region.

Yet the U.S. Navy, which serves to uphold U.S. security and economic interests by maintaining freedom of navigation and trade on the seas, is struggling to field a fleet that can consistently maintain a presence around the globe.

For example, the Navy has operated only 10 aircraft carriers for a number of years in a row, below the legal minimum of 11. At the other end of the surface fleet, the Navy has held that it requires 52 small surface combatants such as frigates or mine-hunting vessels, yet it currently only sails 17.

This is reflected in the Navy fleet as a whole, which has shrunk by 13 percentsince 9/11 and is our smallest fleet since 1916. While the index shows the need for 350 U.S. ships, the Navy currently stands at only 272.

Across the services, the military is also experiencing aircraft shortages and procurement delays. The F-35C, the Navy’s variant of the fifth-generation Joint Strike Fighter, will not be procured in large enough quantities to offset the retirement of the F/A-18—a concern mirrored in the Air Force where F-35As are not coming online quickly enough to replace aging fighter aircraft.

The Marine Corps is also experiencing shortages in its CH-53E heavy lift helicopter fleet while it awaits the overdue delivery of the CH-53K. And although the Air Force still fields nearly the 1,200 fighter aircraft recommended by the index, the Air Force is currently short around 700 pilots that can operate them, meaning capacity is actually half of what is in the inventory.

Furthermore, shortfalls in the Air Force’s parts inventory and a shortage of aircraft personnel have meant that fewer aircraft are available for training and contingency operations. This reduction in training opportunities has resulted in a sharp decline in readiness and an increase in aircraft mishaps attributed to human error.

Lower aircraft numbers in the Air Force have also resulted in higher usage rates for available aircraft, which accelerates the wear and tear on already strained airframes and increases the risk of future mishaps.

The 2017 Index of U.S. Military Strength reveals a continuation of the troubling trends described in the first two editions. While the size and capabilities of the U.S. military continue to decline, U.S. adversaries are expanding their influence and capabilities around the globe.

As the next administration prepares to take over the executive branch, it must remember its constitutional responsibility to “provide for the common defence.”

This article originally appeared in the Daily Signal