The Curious Love-Hate Relationship between China and North Korea 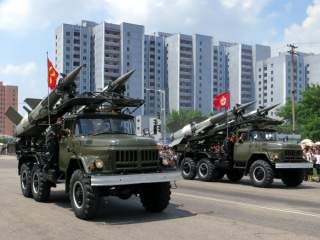 During the much-anticipated 7th North Korean Workers’ Party Congress last month, the first such gathering in 36 years, more than 100 foreign journalists were invited to Pyongyang to cover the event. Not surprisingly, they were treated with contempt: relentless surveillance, absolute restrictions on movement, and tightly-controlled access to the North Korean people themselves. Some insight did permeate through, however, namely dissatisfaction with China. That North Koreans were allowed to share their animosity towards Beijing suggests official approval of such feelings.

Though counter-intuitive, experts have for some time been aware of the toxic relationship between the two countries, particularly in the years since Kim Jong Un assumed power in 2011. The very real understanding that the North would be crippled without Chinese political and economic maneuvering has grown increasingly troublesome for Pyongyang elites. The late Kim Jong Il himself supposedly divulged such reservations to former US Secretary of State Madeleine Albright during her visit to Pyongyang in 1999.

Not as Close as ‘Lips and Teeth’ Anymore:

Cynically marketed by both countries as a blood alliance between two communist states, Chinese assistance to North Korea is instead almost entirely geopolitical in design and objective. Aid is funneled into sectors where China’s own needs lie: resource extraction and infrastructure development. The bilateral relationship, described by Mao Zedong himself to be as close as 'lips and teeth,' is now dominated by the North’s heavy reliance on China. A Chinese aid cut-off would threaten internal Northern stability and sever its primary pipeline to the global economy. This leverage has grown as North Korea has fallen under ever-greater sanction.

Ensuring the continuation of the status quo on the Korean Peninsula ‘buffers’ China against South Korea and Japan, and their American ally. This is widely known. But there is a less often discussed economic benefit too;  Beijing’s creeping economic colonization of the North. There is virtually no competition for the Chinese, as multilateral sanctions have placed the cost of doing business with the Kim regime out of reach for most. And the bigger the benefit to China, the more likely Beijing will support development. Three high-speed railroads are under construction which would link northeast China to North Korean cities, providing valuable trade and economic avenues for an area that has lagged behind the rest of China (the border city of Dandong processes 80% of trade between the two countries and would be hub for the new rail lines). In order to pay for this, North Korea allegedly offered China exclusive development rights to seven major mines (Jang Song Thaek, Kim Jong Un’s uncle and leading diplomat to Beijing, was supposedly executed in 2013 for these kinds of one-sided deals). Special economic zones (SEZ) and deep-water ports are no exception: they are built by the Chinese for the Chinese.

To be sure, China’s conduct with the North does not deviate far from its modus operandi in other developing countries. Whereas the Soviet Union leveraged its military to bring vassal states in line, China uses its massive economy to influence decision makers from Pyongyang to Phnom Penh. Nearly 80% of firms in China are state-owned enterprises, and the banking sector is dominated by Beijing bureaucrats. This gives the state remarkable control; it can funnel money to states that support its geopolitical goals, or punish states that do not.

Pyongyang decision makers are well aware of this dynamic, a key reason why they have not (and will not) abandon their nuclear weapons. The bomb protects the regime’s political sovereignty, even as economic control is slowly lost to asymmetric economic dependence on China. Indeed, the recently-announced Five Year Plan, the first in decades, may indicate that Pyongyang wants to lighten that dependence by finally igniting some domestic GDP growth. And there have been rumors for years that North Korea seeks an accommodation with America in order to check the erosion of its sovereignty to China.

A North Korean Accommodation with the United States? Desirable, but Unlikely:

During the Cold War, North Korea guarded its sovereignty despite weakness by pedalling back and forth between China and the USSR. The USSR’s collapse left it with China alone as a patron, which obviously dramatically improved Chinese leverage. Conversely, the late 1990s famine showed what happens when North Korea lacks a sponsor and goes it alone. A return to the good old days of two, competing patrons would be better than choosing between China and famine. And, curiously enough, the US is not a bad choice for Pyongyang:

First, North Korea is far less likely to be dominated economically by the US than China. The US does not have the leverage over North Korean enterprises the Chinese do. The Obama Administration cannot guarantee Amtrak railroads in the North, nor can it claim ownership over mines and ports. Assistance to the North would likely come in the form of cash or raw materials, allowing Pyongyang decision makers to apply it as they see fit. Any kind of entrepreneurial incursions into the country would be initiated by non-state actors, affording Pyongyang a level of control it no longer has with Chinese investors.

Secondly, political domination is also less likely, as the US and North Korea — unlike China and Korea — do not have a shared historical and cultural legacy. America is both geographically and culturally far removed from East Asia, and so far less likely to dominate it or bully Pyongyang. Such behavior would also be at odds with the US domestic liberal ideology of self-determination. A North Korea no longer threatening the US would cease to interest policy-makers or the public much. Post-accommodation, most Americans just would not care enough about Korea to meddle as China does now. China is the opposite. It has a long history of intervention in Korea; it is right next door, creating obvious interests in how North Korea is governed; and its cynical, bullying domestic government style is apparent in its foreign policy. Its inclination is treat North Korea as a satellite.

Nevertheless, an accommodation with the US is unlikely. US-North Korean relations are unlikely to improve so long as North Korea retains nuclear weapons. But that puts Pyongyang in a catch-22: keep the weapons and be stuck with creeping Chinese economic domination, or surrender them and hope for a US deal. Both are unpalatable risky, which I believe is the reason for the new Five Year Plan announced at last month’s Workers’ Party Congress. If North Korea can actually function economically on its own, then its need for China, or a US deal, would recede.