The Dangers of Bringing North Korea to Its Knees 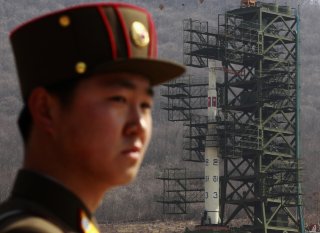 Yielding under pressure would come at a huge cost, as North Korea would no longer be able be to play the role of a potentially suicidal nuclear madman to draw leverage from the international community. Pyongyang would lose its ability to blackmail neighbours and the United States as well as to control tensions on the Korean peninsula. Further, with North Korea’s bluff called, the United States and China would be well equipped for the next time Pyongyang exhibits provocative behaviour.

Following recent missile and nuclear tests by Pyongyang, many in the international community have advocated for strong pressure on China to use its significant economic leverage to rein in Kim Jong-un. There are signs that Washington might pursue this strategy. Such an approach looks attractive to an administration short of good options — it is a stronger version of previously ineffective sanctions and a reasonable alternative to the use of force. But it is also very dangerous.

Pyongyang is clearly striving to establish a credible nuclear deterrent against the United States to guarantee its security. For this reason North Korea needs to conduct more nuclear and missile tests. If Beijing wants to force Pyongyang to abandon such a vital security goal, it has no other choice but to cut North Korea’s economic and energy lifeline and bring its smaller neighbour to the brink of economic collapse.

Such a policy would raise the prospect that the North Korean regime could fall, an outcome China fears most and one that has convinced Beijing to maintain its policy course on North Korea for some time. Smaller measures such as trade sanctions or temporary restrictions on the delivery of gas, oil and coal would hardly force Pyongyang to stop its pursuit of a nuclear deterrent. Thus, China’s leverage over North Korea is very difficult to use.

But were it to happen, Beijing’s strangling of North Korea would immediately raise two great risks.

First, North Korea would likely respond to pressure with large escalation, unleashing provocations, cyberattacks and military actions on South Korea, Japan or the United States. Such actions would spark further military escalation on the Korean Peninsula and raise the spectre of war and North Korea’s collapse. Faced with such crisis, would the United States and China continue the deadly pressure on Pyongyang as the domestic, economic and international costs began to mount? And would they remain united?

While escalation would be extremely dangerous for North Korea, it would be in line with their past actions. Pyongyang has never shied away from escalation, as demonstrated by the sinking of the Cheonan, cyberattacks on Sony and recent threats to Guam.

There is also a rational argument for escalation. Yielding under pressure would come at a huge cost, as North Korea would no longer be able be to play the role of a potentially suicidal nuclear madman to draw leverage from the international community. Pyongyang would lose its ability to blackmail neighbours and the United States as well as to control tensions on the Korean peninsula. Further, with North Korea’s bluff called, the United States and China would be well equipped for the next time Pyongyang exhibits provocative behaviour. Most important is that without escalation, North Korea would have to halt the development of its vital nuclear deterrent before it is fully operational.

Evidently, North Korea is more likely to escalate and test the resolve of Washington and Beijing than to fall on its knees. Nobody can predict how such a game of chicken would end.

Second, squeezing Pyongyang hard might instigate the outcome that many fear: the fall of North Korea. The disintegration of North Korea’s economy — particularly if coupled with military action — might produce a revolution, regime collapse or an internal coup with terrifying consequences.

There are already signs that the regime is less stable in that its control over the minds and the economic fortunes of its citizens is diminishing and Kim Jong-un’s penchant for executions is straining the loyalty of officials in government and the military. Bringing North Korea to its knees economically would certainly be a high-risk bet by the United States on the stability of a regime about which it understands little.

If the Kim dynasty begins to fall, it is not far-fetched to conceive nuclear threats aimed at deterring foreign intervention and the actual use of nuclear weapons as a last act of revenge by a dying regime or a desperate attempt to crush a revolution. North Korea’s downfall would also likely unleash a flood of refugees to China, producing a humanitarian crisis and the basis for future Korean claims to Chinese territory.

Even worse, North Korea’s collapse might lead to Chinese intervention, which could produce military confrontation with the United States and South Korea or foster significant tensions that turn the soft Sino–US rivalry into a deeper, uglier conflict. Beijing might also find itself in the dreadful position of having to occupy, pacify, re-establish and rebuild North Korea, all of which would have huge economic cost. In return, China would likely receive fierce criticism, witness the mobilisation of South Korea, Japan and the United States against it and suffer enduring antagonism by Koreans on both sides of the 38th parallel.

This analysis does not suggest that a policy of pressuring China to use its economic leverage over North Korea would not work or should never be adopted. But even with favourable conditions and full Chinese cooperation, likely obtained at high cost, it will always run the risk of producing escalation or regime collapse.

Even with knowledge of these risks, the Trump administration might still decide that they are worth taking in the face of the unprecedented threats by North Korea. If they do, the United States should be prepared for the potential consequences.