The Decline and Fall of China’s Long View 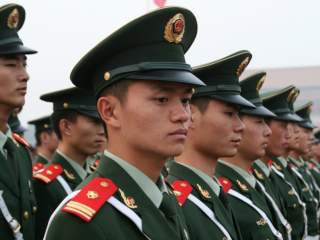 China is often credited with taking the long view to achieve its strategic goals; however, that luxury may be coming to an end. There is an oft-quoted story about former Chinese Premier Zhou Enlai, who, when asked about the effects of the French Revolution on China, demonstrated the Chinese long view by answering, “It is too soon to tell.” U.S. strategists, on the other hand are often limited in their ability to plan beyond the current administration. They have watched China slowly grow in power, both militarily and economically, over the last few decades with an arguable long-term goal of displacing the United States as the dominant global power, all the while focusing their own efforts on wars in the Middle East. China has remained in the shadows of global security, rarely venturing out to address even regional challenges, hoping their gradual, long-term, hegemonic rise would become a fait accompli. That hope may now be at risk.

A booming population with scarce agricultural resources led Chinese leaders to adopt a One-Child Policy in 1979. While this policy mitigated exponential population growth and prevented a Malthusian catastrophe, the effect is an aging demographic that will weigh heavily on Chinese power/control in the coming decades. In short, a relatively small under-30 crowd will have to support a much larger over-70 crowd. The ramifications are already being felt. In 2012, China’s workforce decreased by 3.5 million and is forecast to continue its decline. Some estimates indicate that by 2020 Shanghai, a city with almost 15 million people, will have a population in which fully one-third will be over age 60. Additionally, the Wall Street Journal estimates that by mid-century the population of China will consist of 186 single men for every 100 single women, a recipe for increased crime and dissension, (as well as a continued declining birth-rate). China’s ability to maintain a self-sustaining workforce is waning rapidly.

China experienced a meteoric rise in its economy, reaching years of continued growth in excess of 10 percent. Those days are over. China’s most recent quarterly growth was just under 7 percent, with projections continuing to decline over the next decade and beyond. Why does this matter? If China wants to become a global power, it will need the funds to do so. That money must be used for external investment, military procurement and continued infrastructure development. Sustaining the growth of China’s military and economic power will become more difficult, and will soon begin a slow and potentially unrecoverable decline.

A third factor contributing to China’s slowdown is a phenomenon called the middle-class trap, whereby a country transitions from a poor to middle-class economy through basic manufacturing and textiles. The difficulty lies in developing those skills to take industrialization to the next level, such as providing education and training for the new industries. China has been unable to develop its education infrastructure to meet its requirements. The wealthy are able to send their children overseas, and China sends over a quarter million of its students to U.S. colleges and universities. However their inability to meet educational demand domestically will limit their ability to meet professional domestic requirements, thus limiting their ability to make the transition to an advanced economy. Basically, China is great at making “things,” but how much has China actually developed? Of course, as the middle class increases, and wages improve, industries in search of cheap labor migrate elsewhere, such as Indonesia, Malaysia or Vietnam, leaving China in search of employees and incapable of continued development. While not inevitable, many Latin American countries such as Brazil have fallen into this trap. They cannot compete with countries with greater capabilities in more technology-intensive goods and services. Because like China, they have never developed the policies and institutional environment to make the leap to high-tech or industrial economic development—what is often referred to as industrial policy.

Protests are on the rise in China, especially small-scale protests, with dozens or a few hundred people in attendance, take place frequently. On January 1, for example, there were demonstrations in Beijing, Nanchang, Nanjing, Hangzhou, Wuhan, Changde, and Dalian. While not always politically motivated, they are growing in number. And in 2015, thousands of protesters took to the streets of Hong Kong wielding umbrellas to reduce the anticipated effects of tear gas. While Hong Kong is a somewhat special case, these “umbrella demonstrations” show a disconnectedness between the government and the people not seen since the 1989 protests in Tiananmen Square. The government of China is more concerned with its own citizens than they are from external threats. This is evident by an internal security budget of 769.1 billion yuan which exceeds the much-hyped Chinese defense budget of 740.6 billion yuan. The Communist Party is discovering the price of a stronger economy: a middle class that demands basic rights. In 2014, the Chinese leadership was so concerned about its domestic situation the Communist Party instructed party officials to curtail: promotion of constitutional democracy; promotion of universal values; promotion of individual rights; neo-liberalism; open press; historic nihilism (questioning the party’s interpretation of history); and questioning reforms. This is not a sign of a healthy administration but rather one that sees itself in danger. The Communist Party is struggling to limit the seeds of democracy.

With an aging populace, a slowing economy, and a rising middle class desirous of individual freedoms, China no longer has the luxury of pursuing gradual global hegemony. The realization that continuous unfettered growth is ending helps explain the sense of urgency China is exhibiting through the rapid military growth and global economic outreach of the past few years.  China no longer finds comfort in an infinite event horizon; rather they are coming to a recognition that decline is imminent.

China’s power is still rising, but the slope of that line is rapidly flattening, and China knows that if it doesn’t reach its objectives soon the opportunity may be lost. This suggests China is likely to become more aggressive in achieving their objectives in the coming decade. The best answer the West has to prevent Chinese ambitions in the near term is to ensure a level of deterrence strong enough to demonstrate that the additional costs to China just isn’t worth it.

Captain Robert N. Hein is a career Surface Warfare Officer, and member of the Military Writers Guild. He previously commanded the USS Gettysburg (CG-64) and the USS Nitze (DDG-94). The views and opinions expressed are his own and do not reflect those of the Department of the Navy, the Department of Defense, or the U.S. Government. You can follow him on twitter @the_sailor_dog. This article first appeared in the Bridge.