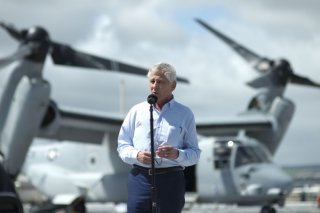 The departure of Chuck Hagel will likely herald some important changes in foreign policy, particularly with regards to the torrid security situation in the Middle East.  Yet the reshuffle also points to an enduring consistency of the Obama presidency: the relentless subordination of defense policy to perceived domestic-political imperatives.  Whoever succeeds Hagel, then, he or she will place an uphill struggle when it comes to revivifying national defense policy.

Hagel was placed in charge of the Pentagon primarily as an overseer of swingeing cuts to the defense budget.  As a Vietnam War veteran and a former Republican senator, Hagel was thought to tout the credentials necessary to push through the draconian economies imposed upon the U.S. military by sequestration.  America’s military establishment was to be slimmed down; the nation’s defenses were to be recalibrated for the post-Iraq and post-Afghanistan era; and a gradual focus on East Asia was supposed to be introduced to eclipse a decade’s worth of preoccupation with the Greater Middle East.  Simply put, Hagel was never prized for his reputation as a strategic visionary but rather as a political appointee who might be able to shepherd the DoD through a turbulent period of downsizing and reorientation.

Hagel’s original mission, of course, was soon completely upended by events on the international stage.  The Syrian civil war, Russia’s invasion of Crimea, and the rise of the Islamic State have thrust defense policy to the fore—much to the chagrin of a president who would much rather be able to devote his talents and energies towards domestic policy.  Under Hagel, the DoD has (by necessity) been involved more in short-term crisis management than long-term restructuring.  This is not the job that Hagel was tapped to perform.

Now, President Obama appears to be searching for a new foreign policy tack.  Slammed by his critics for making the wrong calls in both Syria and Iraq, the president has ordered his advisers to rethink how the United States should discharge itself in the Middle East.  After being reactive for the past several years, a proactive strategy is said to be in the works.  Hagel’s departure from the Pentagon is nothing more than a correlate of this belated strategic adjustment: different talents will be required to administer Obama’s new approach, whatever it turns out to be.

As such—and as Julia Ioffe has noted—replacing Hagel at the Pentagon simply will not achieve the same sense of a fresh start that, say, George W. Bush’s firing of Donald Rumsfeld achieved in 2006.  Rumsfeld had been allowed five years to design and implement a creative (if flawed and controversial) strategy for the U.S. military.  His sacking clearly signaled the Bush administration’s intention to chart a new course during the depths of the Iraq War’s unpopularity.  By contrast, President Obama’s appointees have been offered relatively little scope to make their own mark on defense policy; they have been issued with instructions rather than entrusted with authority.

All of this means that Chuck Hagel’s successor should not be expected to bring with them sweeping changes to defense policy.  For President Obama, domestic politics always has trumped foreign and defense policy.  Robert Gates and Leon Panetta each complained of a president more concerned with managing the domestic-political fallout of defense policy than with devising an effective posture for U.S. military forces abroad.  Whoever is confirmed to succeed Hagel will face the same president with the same political priorities: a leader elected to end wars rather than begin them; somebody who believes that domestic rejuvenation should take precedence over costly (and risky) foreign adventures; a president deeply concerned about asking the American people to spill yet more blood and treasure, preferring instead to offer the least line of resistance to foreign threats; and who, ultimately, is convinced that defense policy ought to be tamed and made subordinate to domestic-political ends.