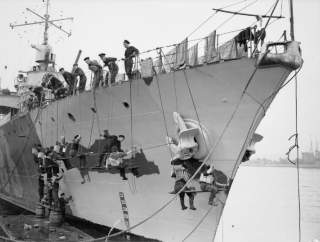 Destroyers in World War I rarely got close enough to battle an enemy fleet with their guns, so navies began building faster, most robust and heavily-armed destroyers packing bigger weapons and additional torpedo tubes.

During the following interwar period, no country embraced this trend more than France, which built several large, fast destroyer classes—one of which still holds the world speed record for a destroyer at 45.1 knots. However, “destroyer” can be a vague term. Case in point is the U.S. Navy’s modern Freedom-class littoral combat ship which is considerably smaller than a modern destroyer, but larger, heavier and faster than a World War II-era one.

The Le Fantasque-class destroyer Le Terrible was laid down in 1931, launched in 1933 and secured the speed record in 1935 during her trial runs. She was formally commissioned into the French navy on May 1, 1936 at a displacement of 2,570 tons. The warship carried five 5.4-inch guns and nine torpedo tubes located amidships. Even though 45 knots was her record flank speed, 40 knots was typical.

The Washington Naval Treaty played a role in the impressive La Fantasque class. France, Japan, Italy, the United States and the United Kingdom agreed in 1922 to limit the strength and size of their navies, particularly capital ships such as battleships and aircraft carriers. Destroyers, however, did not have such restrictions, which incentivized navies to build more formidable versions.

A tragic fate struck the Le Fantasque class as with the rest of the French navy. Le Terrible first prowled for German cargo ships but then fell into Axis hands following the capitulation of France on June 22, 1940, which split the French navy into warring Free French and Axis-aligned Vichy camps.

Le Terrible fought—and barely escaped destruction—during the British bombardment of the Vichy navy at Mers El Kebir in Algeria on July 3, 1940, which resulted in the deaths of 1,297 French sailors.

In September, Le Terrible joined a Vichy flotilla which successfully parried an attempted Allied invasion of Axis-controlled Senegal. The accompanying Le Fantasque-class destroyer L’Audacieux was badly damaged during the battle and British warplanes eventually sunk her in May 1943.

Among the other ships of the class, Triomphant successfully escaped Vichy France and carried on fighting for the Allies. Following the Allies’ Operation Torch invasion of North Africa in November 1942, Nazi Germany invaded Vichy territory in southern France. The Vichy navy in Toulon, having defected to the Allies, then scuttled itself along with the Le Fantasque-class destroyer L’Indomptable. Terrible.’ Photo via Wikimedia

Le Terrible, Le Malin and the class namesake, Fantasque, all defected successfully to the Allies during Operation Torch. Fortunately for the lucky Le Terrible, the Allies still found her useful, reclassifying the ship as a light cruiser, adding an ASDIC sub-hunting device and more than doubling her anti-aircraft guns with bigger ones including eight 40-millimeter Bofors cannons.

The warship had a distinguished career for the remainder of the war, serving in the Allied invasion of Sicily, in raiding parties with her two sisters in the Adriatic—Triomphant had earlier sailed for the Pacific—and during the invasion of southern France which followed the Normandy landings. Le Malin and Le Terrible then collided into each other in December 1944, knocking both out of action for the remainder of the war.

Post-war, the patched-up Le Terrible—still quite speedy—served as an aircraft carrier escort and training ship before being scrapped in 1962. Overall, she was a formidable and valuable little ship, and survived several close-calls when her sisters didn’t.

This originally appeared in War Is Boring here.